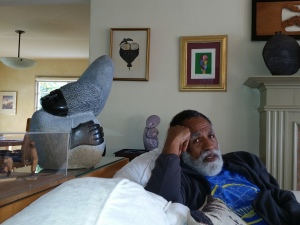 Arnold at home in East Oakland

After attending a Seventh-day Adventist National Conference in Oakland, the Perkins’ family in 1954 relocated from segregated Miami Florida to Oakland. Their eighth-grader son, Arnold, attended Golden Gate Academy, where white students teased him about his stuttering. “I kicked their asses and they expelled me, but I didn’t care. I continued fighting at Berkeley High,” Arnold said. And in time, stuttering Arnold stopped fighting and became a master communicator.

Perkins’ grandfather migrated from the pink sands of Eleuthera and Cat Island in the Bahamas to Miami, where Arnold’s father and other community elders built each other houses.  Gator (Arnolds’ nickname because he was fearless like an old swamp alligator) never acquired that skill set; however, Mr. Perkins did instill a mindset in Gator that he wasn’t less than, which was Mr. Perkins’ interpretation of a minority.

Gator’s childhood fighting and speech impediment help him empathize with boys he visits on Mondays at Chaderjian  (CHAD) Youth Correctional Facility near Stockton. “These are our boys,” he said. Why does he care?  “My generation failed to stop the crack epidemic or recognize how it would disrupt communities and I personally take responsibility for improving our communities’ health,” he said.  “I can relate to their (boys) short tempers and fighting, because I’ve been there. It takes about 18 months for them to hear me.”  And that change, “Will give them a few extra seconds to think. Hopefully, giving them enough time to de-escalate a tense situations,” he said.

Perkins had his first son Anthony with his high school sweetheart Pat. He joined the Navy to support his family, where he conquered his fear of water and learned the value of trust during the man-over-board exercises. He and other sailors were ordered to jump off the ship, which stood approximately three stories above the water. “The ship disappeared from sight before  turning around to pick us up,” Perkins said. An experience that taught  him to trust his training and that large systems require lots of space and time to turn around, like government agencies.  While in the Navy, he served with Dr. Frank Staggers Sr. who became Perkins’ mentor and taught him the three Bs, “Be Bright, Be Brief and Be gone,” Perkins said. A tip he often gives along with his selfless devotion to repairing communities’ tattered fabric with his personal gift of engagement.

When asked about his career, he said, “I didn’t have a career plan. I got jobs through building trust,” and he zigzagged through employment uncertainties, becoming a teacher, principal, restaurateur, Manager of Alameda County Homeless Coalition, and Berkeley Flea Market Manager en route to taking charge as the director of the Alameda County Public Health Department, where he managed a $105 million budget and more than 500 employees.

Perkins retired from Alameda County in 2006; however, he currently serves on 14 boards, and is the chair of:

“I’m working harder now than I did at the county,” Perkins said. 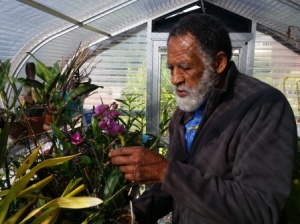 Baba in his greenhouse

Baba Perkins (Baba is Swahili for father) has had a knee and shoulder rotator cup replaced, and he is a 10-year prostate cancer survivor. He’s a lifetime member of the San Francisco Orchid Society and has raised orchids for over 30 years. Six years ago, he took his passion for orchids up a level when he installed a temperature-controlled greenhouse in his backyard. Warm breezes skipped across our faces as he explained, “These orchids require  porous soil and constant temperature.” He has hundreds of orchids growing in the yard and inside his greenhouse, with many in the house. “The vanilla we consume is an orchid pod,” he explained as he swabbed off little white bugs with alcohol. 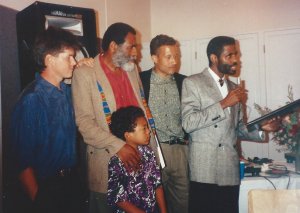 I attended Baba’s 50th birthday party, 23 years ago, and met his four sons of the rainbow. Darryl ,the youngest, whose mother Karen is Baba’s third wife and is of Japanese ancestry. Kevin standing to the left of Baba and his brother Miles to the right are sons with  Baba’s second wife Susan, of Caucasian ancestry. Sadly she died in a car accident and Baba temporarily raised the boys alone. Anthony is standing to the far right; his mother, Pat, is of African American ancestry. A family of brothers from another mother—all raised as one. 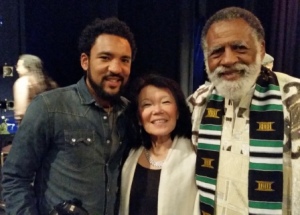 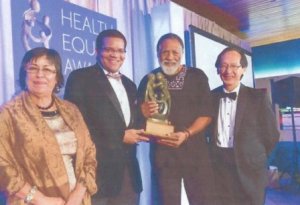 In 2014, the California Endowment  (TCE) Foundation awarded Baba Perkins with the Health Equity Founders Award for his lifetime inspired vision, passion and commitment to social justice and health equity in California. TCE created the Arnold X. Perkins award for Outstanding Health Equity Practices and awarded it to the Alameda County Health Department in the amount of $100,000.

Not bad for a former street fighter who turned into a man with strong feelings—a community change agent in transition to Oakland’s Renaissance Baba—listen to what the Community has to say. https://www.youtube.com/watch?v=04hDropqUAQ