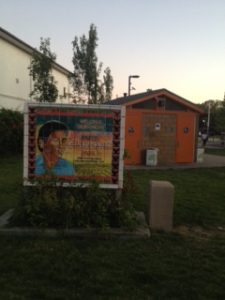 Cesar Chavez must be turning in his grave.

A little over a year ago, Cesar Chavez Park in the Fruitvale District was formally rededicated and renovated with a California State grant (http://oaklandwiki.org/Cesar_Chavez_Park). The grass area was swapped with turf, the basketball court was resurfaced, exercise equipment was installed and the play structure and bathrooms were replaced.

Despite the rebuilding of the park, Leon Murphy, an Oakland native who exercises in the park four times a week says, “The park needs to be cleaned up more often.”

Murphy understands that some people do not value Cesar Chavez Park enough because of other issues like potholes on the surrounding streets and prevalent gang-violence. “You do not see potholes on streets and dirty parks in suburban neighborhoods,” Murphy says.

The park is near Foothill Boulevard and 38th Avenue, an area plagued with shootings, sideshows and armed robberies. Residents I spoke with said the park is important for the neighborhood because it brings people together.

Roberto Navarro a longtime resident of the neighborhood said Cesar Chavez Park is a place for people to relax. “I remember the first time the park was rebuilt and dedicated to Cesar Chavez in 2002”, said Navarro. During the first rebuild, the Spanish Speaking Unity Council led students and local residents in a campaign to change the name of the park in honor of the famous labor leader, Cesar Chavez.(http://oaklandwiki.org/Cesar_Chavez_Park).

Navarro said, “fui a todos las juntas en el parque”, (I attended all the community meetings which were held in the park). Navarro went on to explain, “ahi mucho vegetacion y arboles en el arroyo para que se esconda la gente mala” (there is overgrown brush and vegetation around (Peralta) Creek and it provides areas for bad people to hide). Efforts have been made to clear the heavy brush, but according to Navarro “it is worse today than it has ever been.”.

Still, Navarro says, “the park is very nice and many kids and families enjoy the park, but more needs to be done so more families can feel safe enough to enjoy the park, like having more police presence.”

The day I visited, there were many families enjoying the nice weather. Kids were playing on the play structure and teenagers were laughing and conversing among themselves on the benches. Despite the enjoyable time in the park that day, the gang graffiti and trash in the park gave me a sense that violence could erupt at any moment.

One thing we can all do is start to be accountable for our trash and more respectful of our public spaces. More needs to be done by the City and the community to undo the lack of value in some community members that attend the park. Perhaps seeing City workers cleaning with more frequency and community members being more responsible about the park’s appearance, more individuals will think twice before trashing the park.

When asked what he thought the famous labor leader Cesar Chavez would say about the current conditions of the park, Navarro laughed and said he would “probably strike by not attending the park.”