This ongoing series explores the unusually diverse racial terrain of the eastside of Oakland, California. It asks members of East Oakland’s varied racial groups why they chose to live there, where they came from, where they’re going, how they see their own race, and about their experiences with members of other races. 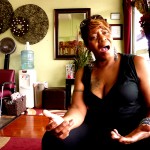 When I walked into Janice Ward’s The Secret Inside Salon, I figured we would talk about the business of beautification and the ups and downs of doing hair in a dingy High Street strip mall.  But I discovered that Ward doesn’t just do peoples’ hair. She does their heads too, reaching inside and restyling their brains to turn negatives into positives.

The Secret Inside Salon is sandwiched between a coin-operated wash house and the On the Runway fashion boutique in the High Street Center. The whole building is a rough-around-the edges, one-story structure that also features a donut shop, a burrito joint, and a check-cashing place.

You can’t miss the center if you exit 580 East at High Street and make a right. It’s right there. There’s a Walgreens across the street, as well as a fire station.

The 30 or so parking spots in the lot in front of the center were mostly taken at 11:15 on a Wednesday morning, but the numbers didn’t seem to add up. There were just three people in La Mejor Taqueria, maybe four in Dick’s Donuts, and just one at that time in Ward’s salon.

Ward, who’s been a stylist at The Secret Inside Salon for nine years and its owner for two, said she often notices that the lot will be full of cars but nobody’s in the stores. Sometimes cars are parked there and businesses aren’t even open.But she said her business is doing OK. “Stabilized. That’s about all it can be these days, no matter what industry you’re in.”

Even though it was still early, five or six customers gradually straggled into the salon: stylish African American women who looked like they knew what they wanted, and where and how to get it. Most of Ward’s customers are black, but she has Latino and Samoan clients, too. 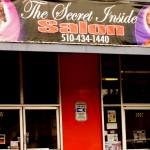 The Secret Inside Salon (R. Owens)

When Ward took over the business, she retained three original stylists from The Secret’s previous incarnation. Ward, who’s 49, said she does mostly short cuts and weaves.  She said there’s also a male stylist who works exclusively on dread hairdos for men, women, and kids, too. “There’s also an Asian lady who does feet and nails.”

Ward and I conversed on one of two long, vinyl sofas that faced each other by the front window of the salon. From the outside, you see the dark, plate-glass windows of a garden variety 1960s-era strip mall storefront.But open the salon door and you see a heavily mirrored Afro-Tiki-bar kind of space that’s larger and longer than you might have expected, with six or seven styling stations. It’s a peaceful atmosphere, and kind of homey. “That’s the secret inside,” Ward said.

Ms. Ward was very personable and seemed to possess an ability to absorb a person’s vibe and secrets on contact, although she assured me that any confidences I shared would be safe with her. She said a big part of her job is talking with her customers on an intimate level. She’s part psychologist, building up her clients’ self-esteems. 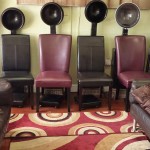 A lot of black women have issues surrounding their appearances, she told me. “I want them to know that they have beauty within themselves, and what I do is reflect that beauty on the outside.”

A lack of self esteem did not seem to be one of Ward’s issues. From the top of her short, red-highlighted hairdo to the bottom of her decadently low-cut black top that revealed a brown bosom tattooed with the words “God” and “Soul,” it was Ward’s world, and her purpose was to make you a better part of it.

I had set up the meeting with Ward a week earlier, after two other proprietors in the strip mall had turned down my requests to interview them about their businesses. “I agreed to talk with you after nobody else would, but I knew it wasn’t about that,” she told me. Ward seemed to be saying that there was a purpose in our meeting, and it was part of God’s plan.

“I’m an evangelist and a motivational speaker. I can read people. I could see that you were a guarded person when you asked if you could talk with me.” I couldn’t disagree with her.

“You’re passive-aggressive. Writing down what people say. I used to be passive, too. I can show you how to use aggression. Give me three hours, I can have you rewired.”

Just three hours? I asked Ward if she could give me a weave, and joked that I’d come in for one and she could straighten me out then. She laughed. “Give me three hours. I’m gonna call you! I’m serious!”

A tempting offer. But I guess I’ll probably have to respectfully decline. Although her assessment of me was startlingly accurate, my general preference is to keep secrets. Inside.