Oakland (December 15th, 2014)—Undeterred by the ‘Hella-Storm’, roughly 200 students, hailing from eight Oakland high schools staged a ‘die-in’ outside the Fruitvale BART station, disrupting business as usual for 4 minutes and 28 seconds. The demonstration briefly shut down the Fruitvale station. Students chanted and rallied one another as they protested the onslaught of police violence in the Oakland community and across the nation.

Wet-pavement aside, students laid on the ground for 4 minutes and 28 seconds to remind and educate spectators on how long 19-year old Michael Brown’s lifeless body laid bare on the concrete in Ferguson, MO.

“I died-in… because it’s like yea… with Mike Brown, we’ll not only kill you, but we’ll leave you on the ground for 4 hours and 28 minutes, and let your body rot. It’s disrespectful,” said one of the students. “It says a lot about how police see us [black people] as people in our communities,” she continued.

Sadik Alshohatee, a 16-year -old 11th grader at MetWest High School, said that the recent deaths of Michael Brown and Eric Garner tell him that “our lives don’t matter”. For many of these students, incessant incidents of police violence have left an indelible mark on their lives.

While the ‘die-in’ was led by students and community members, many Oakland educators stood in support as the students protested.

“My students constantly tell me that they are constantly harassed by the police, be it the Oakland Police (OPD) or the Oakland School Police”, said an Oakland Unified School teacher who did not want to be identified for fear of reprisals from the district. “Students have made it clear that they don’t want cops, armed officers in their hallways, especially when some of those officers have killed young people just like them, like Raheim Brown.” In 2011, Raheim Brown was shot and killed outside of a school dance at Skyline High School by an Oakland Unified School District police officer.

Tuesday evening, district officials sent an e-mail to school principals alerting them that teachers participating in the walkout was “not okay.” The e-mail stated that if “any teachers call in sick to send the info to the network superintendent.” It asked that both teachers and students involved be identified.

Students across the district are still hurt and angry. Many of them closely followed the Michael Brown jury decision. They heard about Eric Garner through Facebook and Twitter, their teachers, and local community organizers.

“There is a lot of anger… hopelessness… and at the same time a lot of students feel very connected to what’s happening—that this could be me”, said Aurora Lopez, the Student Engagement Liaison for Oakland Unified School District. Lopez works with hundreds of students and said she sees the on-the-ground impact that the Black Lives Matter movement is having on students.

“Students are having serious conversations about what it means to be young and a person of color in Oakland. They’re asking questions. And we adults (educators) need to support the emotions they are feeling. We need to support the developing consciousness that these young students are building in response to what’s happening across the nation,” Lopez said. 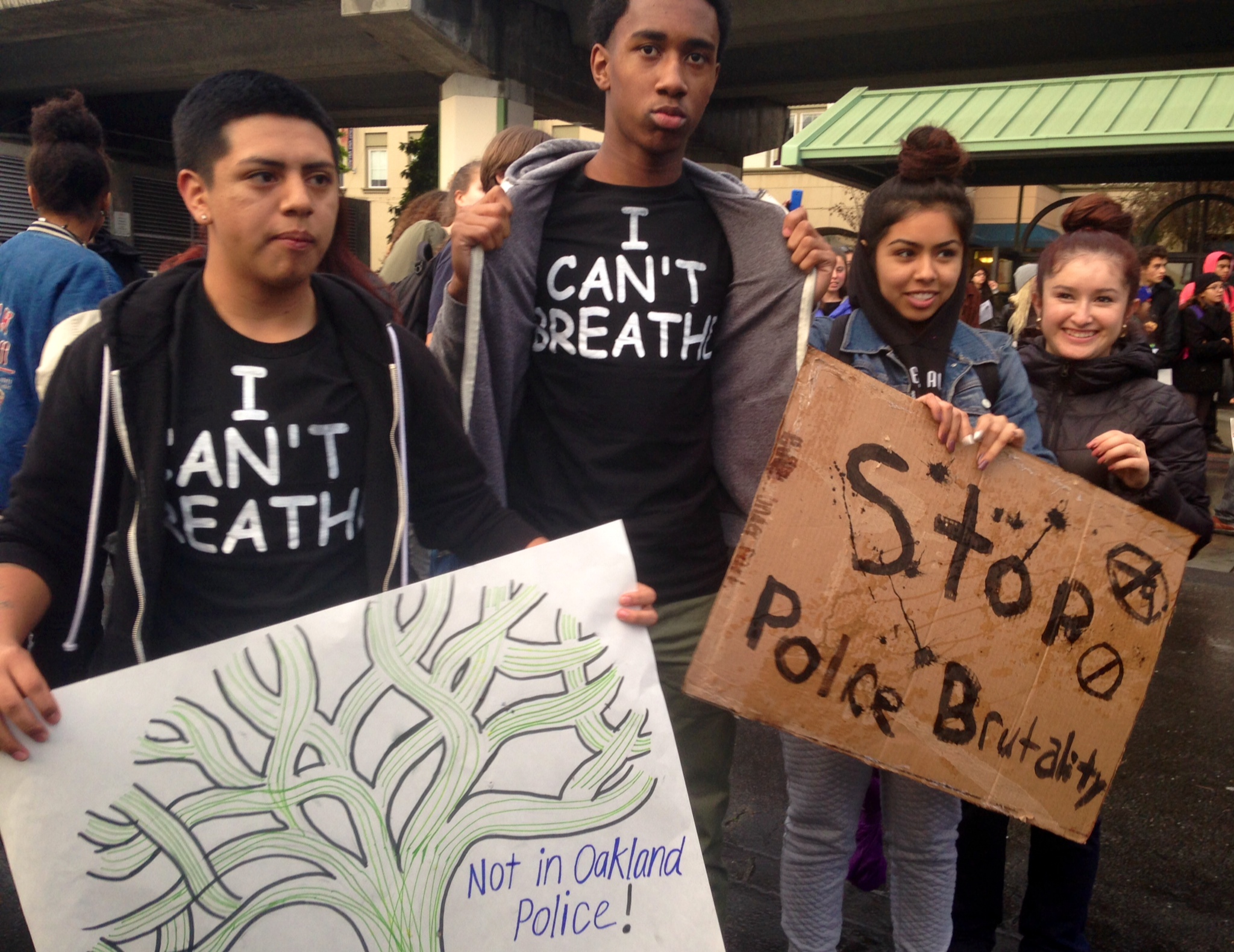 Many students are looking for a space to plug in, to get involved, and to address how police violence has affected their schools and neighborhoods.

Superintendent Antawn Wilson sent out a robo-call to the entire Oakland school community Tuesday evening. He said he knew about the walk- outs, and urged parents to talk to their kids about what’s happening across the nation. “It is an issue I care deeply about”, he said. “[But] I also care deeply about the safety and education of our students. And I want them to advocate for social justice in the manner that maintains their safety and gets the most of their education,” he said.

Naudika Williams, 15, a 10th-grader at Oakland High, walked out at 5th period. “Missing class is a small sacrifice in comparison to what is happening to my peers… what could happen to me—to Raheim Brown ,” she explained.

Williams said that since she cut her hair and started wearing “looser clothing” – an oversized black sweatshirt with a hoodie –  police officers and police cars have been following her more.  She said one night an officer pulled beside her in his car as she was walking home and promptly shined a light in her face. “He just drove away, maybe because he realized I was a girl,” she said.

“Look, we’re not destroying things… we’re marching because we are angry at what is going on across the nation, here in Oakland. These protests are bringing (Oakland) students together,” Williams said.

By Sabirah Mustafa Do you want to feel good? Let go, and step into another world? If you live in Oakland, you don’t have to go far. Just downtown, at the corner of 14th Street […]

Oakland surpassed 500 coronavirus cases; workers rally by car on May Day, officials tell residents to “Give the Lake a Break.” […]

“Growing up, there was just a negative connotation with being a single mom,” says Candase Chambers, “and now that I am one, I’m not that stereotype. I feel like I have to work hard to dispel the stereotype for myself, because when you meet new people the first thing people do is look at your ring finger and see you aren’t married.” […]