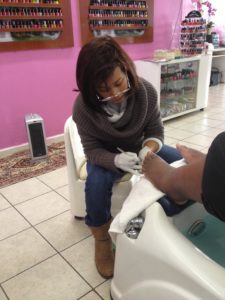 It amazes me how priorities change as you grow older. Feats and experiences that seem so trivial now, meant the world to me as an adolescent. One activity in particular was getting a mani-pedi.

I wasn’t one of those teens that got my nails done every week – only on special occasions. For prom, graduation, or a friend’s birthday party – a nice acrylic French manicure was the perfect touch to make things complete.

A salon visit took nearly two hours, and to me, it was like a miniature vacation. The comfort of sitting in the soft spa massage chair – listening to the soothing hum of the motor as it would gently kneed the stress away. Slowly drifting off into daydream land as the warm water swirled over my toes in the foot spa.

Getting a mani-pedi was almost like a rite of passage to womanhood – the essence of beauty. With each nail that the stylist carefully glued, filed, painted and designed, it enhanced the feeling of confidence and splendor that sat within me.

Back then, my only worry in the salon was if the stylist I liked was available, and what color I wanted.

Fast forward to today. I still walk in looking for my favorite stylist, but I also worry about so much more. Like, how toxic is that brand of nail polish? What sterilization practices does the salon use on their instruments? How are the aromas from the glue and acrylic powder affecting me? The stylist? The ozone layer?

There are organizations that have similar concerns, and are working hard to create positive change. Nail Salon Women Greening Their Jobs and the Environment is a project of Community Health for Asian Americans (CHAA), which is a grantee of the California Endowment’s East Oakland Building Healthy Communities (EOBHC). Launched last spring, the salon project aims to improve the working environment for nail salon staff in Oakland, while reducing the greenhouse gas and other toxic pollutants from Oakland nail salons.

According to CHAA’s Health Equity Initiatives lead, Ann Rojas-Cheatham, MPH, PhD, Oakland is a haven of nail salons. “People come from all over the Bay Area to these salons,” she says. “There are over 200 nail salons in this city.” With the high volume of these establishments in the community, one can only imagine the toll that the chemicals used in this industry is having on the environment.

Even though establishments like nails salons may not seem as harmful to the environment as large polluters like industrial plants, chemicals used in nail salons do have considerable effects on the environment and individual health.

According to Asian Communities for Reproductive Justice, some of the solvents, hardeners, fragrances, glues, polishes, and dry/curing agents, and cleaning products – known as volatile organic compounds (VOCs) – contribute to global warming, specifically through the formation of smog. Hospital grade cleaners and disinfectants used in the salons, known as phenols, are produced from large amounts of the greenhouse gas nitrous oxide, in which the manufactured source of this chemical agent is responsible for about 6% of greenhouse emissions.

As for individual health, in addition to VOCs, tetrachloroethene (PCE) has been found to harm the neurological system, liver, and kidneys after short and long-term inhalation. Other health effects of some nail salon workers that have had prolonged exposure include high rates of multiple myeloma, stomach cancer, mixed lymphomas, cirrhosis of the liver, spontaneous abortion, birth defects, reproductive problems, and asthma.

In an effort to make conditions and salon practices better, the CHAA incorporates strategies that involve policy change, research on the products used in Oakland salons and their impact on the environment, and community engagement – with nail salon workers involved in every step. Owners and workers learn how to improve salon practices to protect themselves and others, and they can also implement practices that save the environment and money.

One key partner of CHAA is PG&E, which conducts energy and water audits at the salons – resulting in changes that save salons approximately 20% annually on utilities.

The program is also pushing for change at a different level. Participants are strategizing to build communication and understanding between Vietnamese nail salon workers and African American clients. “There are often misunderstandings and miscommunication in the salon setting,” says Rojas-Cheatham. The barriers that language and culture can create poses challenges in fostering relationships in the effort to better the community.

As a salon patron, I think that it is wonderful for programs like CHAA to take on an initiative like this. Often times, we tend to associate the depletion of the ozone layer with diesel emission, and large-scale industrial pollution. It’s unfortunate that the nail salon industry is not given as much advocacy and attention, even though it is right under our noses. 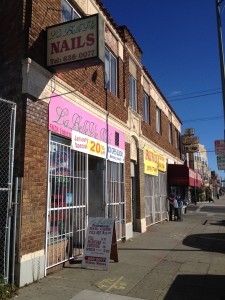 Owned by Van (Vanessa) Nguyen, La Belle Vie is one of over 200 nail salons in Oakland. Katherine Brown – Oakland Voices.

In learning about this initiative, I cannot help but think about the salon that I frequent – La Belle Vie Salon (formerly Tina’s Nails), located in East Oakland on East 14th, near Seminary Avenue. So I stop by to talk with the owner Van (Vanessa) Nguyen, 47, who bought the salon in April 2011. After immigrating from Vietnam over four years ago, the mother of two decided to own her own business. “I like to design – make the nail look pretty,” says Nguyen, “and challenge myself by running my own business.”

When Nguyen bought the salon from the previous owner it was really affordable for her. However, she sometimes thinks she got into this business at the wrong time. “Business is hard. When the economy slows down, people don’t have enough money for nails. Money is spent on things more important,” explains Nguyen.

In addition to the tough economy, Nguyen has had problems with her clients. “There are some good and bad experiences. Some don’t want to pay, or steal the color (nail polish), or complain after they get their nails done.”

Many of her clients are black women. I have personally witnessed some of the “bad experiences” that Nguyen is referencing, and how language and cultural barriers lead to misunderstandings, leading clients and stylists to mistreat one another. I have seen some African-American clients fly off the handle and demand that the stylist re-design their nails because the color they asked for “didn’t look like they thought it would.”

Interactions like these ultimately end up with stylist talking among themselves in Vietnamese – which I’d imagine is peppered with unpleasantries fueled by frustration. Their clients then become more infuriated and use explicit language to further express their displeasure with the service they feel they are receiving.

I have also seen instances of clients promising to run to their cars really quick to get cash in order o pay for the full set that the stylist has taken great care to design, only not to return. The end result – a free manicure for them, and increased prices for those who are honest and pay. Not to mention the loss of product and income for the stylist and salon. These, as well as other similar instances, only further widen the gap between Vietnamese stylist and their African-American clientele – which could stifle any momentum in making this industry green.

Despite these challenges, Nguyen has worked hard to create a business that not only aims to have quality customer service, but includes upgrades and changes to protect her staff and her clients, because, she says, “when my customers are happy, I’m happy too.”

Under her ownership, gone is the heavy aroma of chemicals that was so thick it would cause my head to ache. She greets each and every customer with a smile and warmth – something that you don’t feel very often in parts of The Town – which is met with appreciation.

The relationship that I have with Nguyen is beyond stylist-client. She is a like a family friend. When my sister and mom accompany me to the salon, we talk about family. Nguyen has a daughter preparing for college and she often seeks advice from my mom on how to best support her. As college graduates, me and my sister tell Nguyen what her daughter can expect and how to prepare her for school.

These interactions aren’t directly related to the greening of the nail salon industry, but there is an important connection. Relationships such as these help build communities by fostering trust and respect for one another’s ideas. That opens doors so different groups can together to identify solutions to environmental, economic, and health challenges that we face each day – regardless of whether you’re Vietnamese or African American.