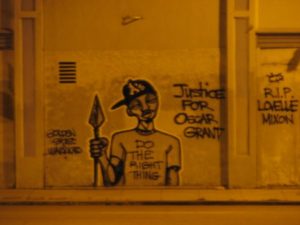 OAKLAND, CA – Rubbing his face quietly, the Oakland-based artist Golden State Warrior looks out of a car window. He surveys his latest graffiti piece as the paint dries in the night air. “My art is intended to stimulate consciousness,” he says.

GSW’s paintings of contemporary urban black warriors holding giant African spears are prominent in high traffic areas throughout Oakland.  “I use the warrior to bring vital information to my audience,” says GSW.

His new painting speaks directly to Oscar Grant’s killing, and to the former BART police officer on trial for the shooting. It’s an eight foot tall warrior standing vigilantly at 74th Street and MacArthur Boulevard in East Oakland. The character is clutching a trademark spear, and wears an Oakland A’s cap cocked to his right. He’s surrounded by the spray painted messages “Justice for Oscar Grant” and “RIP Lovelle Mixon.” “Oscar and Lovelle are both part of the battle between the police and the people,” the artist says. “Oscar was a tragedy. Lovelle was a victory.”

Lovelle Mixon was an Oakland resident who was involved in a shootout that included himself and four OPD officers on March 21, 2009. Mixon and the four officers died. GSW’s view points echo the sentiments of many in the community who feel the officers’ deaths were payback for years of police abuse.

The painted warrior’s shirt reads “Do The Right Thing.” It’s a plea to those deciding Mehserle’s fate. “What would it look like if they do the right thing and bring justice for Oscar Grant?,” GSW wonders.

As Oakland and the nation await a verdict and the city’s response, GSW said he believes the community, city and state are all preparing for the worst. “The city is investing in a fight with supporters of Oscar Grant, not in new levels of accountability for the police.”

Reflecting on the consequences of a not guilty ruling, GSW asks, “what else can the people do but tear up the city? What are we suppose to do when the court doesn’t work for us? I would rather see justice so it doesn’t come to that. But if justice doesn’t come, what else can we do? Nobody said anything about Oscar Grant until we rebelled in the streets and made the city listen to us.”