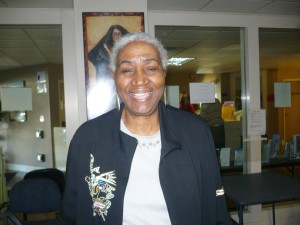 OAKLAND, CA – The West Oakland Senior Center is not an especially big place. But the two-story building, located at a quiet intersection right across from deFremery Park, is a strong magnet.  The center’s draw is so powerful that John Tatmon, a 79-year-old West Oakland resident for nearly two decades, leaves his house every Friday morning promptly at 8:30, and heads over.

“It is important that I arrive early on Fridays,” Tatmon said, since the WOSC often enlists him as a volunteer greeter, or to help put up streamers and balloons for parties. On some Friday afternoons, the center hosts bid-whist parties. Men pack most of the card tables, and if their games sprawl into the early evening – as they usually do – Tatmon sticks around to lock up.

Tatmon has been a WOSC member for a dozen years. As much as he likes helping out, he said he also goes to bask in “the company of old and new friends. It wears me out but I wouldn’t miss Fridays for anything.”

This is the heart of the WOSC: connecting with friends and being involved. Activity sheets posted near the front desk list a wide range of activities such as line dancing, casino trips, and art classes. But people mainly come here to relax together and socialize.

Visitors and newcomers are always welcome, but the seniors here are a tight-knit group. “The closeness, seeing the people you know, seeing old friends, and meeting new people,” Tatmon said, is what keeps him coming back.  No doubt, some of the seniors also come to sample the tea cakes for which Tatmon, also a baking teacher at the center, is famous. 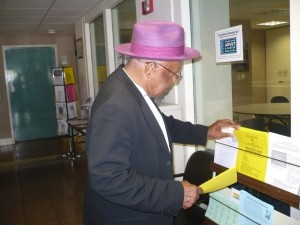 John Tatmon reports by 9 am every Friday morning for his volunteer shift at the senior center, where he greets, teaches baking, and plans for parties. "It wears me out," he said, "but I wouldn’t miss Fridays for anything.” By Jo Ann Bell.

Just as popular at the center are the line dancing class on Mondays and Wednesdays. Seniors from throughout the East Bay sign up for the beginning and advanced lessons. D. Hollingsworth teaches dancers who are often very willing to display their dance techniques to visitors.

The dance classes, like so many of the center’s activities, draw a large number of their participants from outside of the area. Mattie Long lives in North Oakland, and explained the strong connection she has to the WOSC. Although she’s a board member of the North Oakland Senior Center, she treks to the West Oakland facility, she said, because “there are just more black people there.”   She said a lot of seniors come not just for the activities they enjoy, but also “because they enjoy the company of other blacks, and because it is a comfortable and friendly location.”

Those connections are key, as is the center’s commitment to fitness and well-being of its members. WOSC seniors get a host of health, welfare, and other public services information, and they can sign up for exercise classes. The philosophy: Happiness is key to good health.

The WOSC’s biggest gift might just be its doors, which open to a space where seniors can find a sense of belonging. A lot of them aren’t members of religious groups, and many don’t have family in the area. The senior center gives them a chance to be a part of something.  It certainly keeps John Tatmon moving. The volunteer greeter, baking teacher, and party planner said, “I will keep going the center for as long as I am able.”