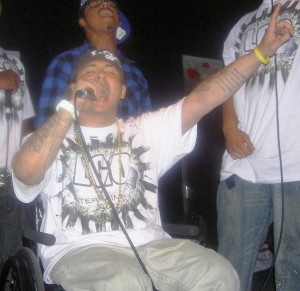 LIVERMORE, CA – Looking at himself in his bedroom mirror, Arthur “AR” Renowitzky contemplates his singular goal: willing himself to the top, with his family at his side, and god on his mind.

He studies his reflection – a confident, street wise rapper, rocking baggy jeans and a baseball cap. There’s also the wheel chair. AR says it’s his reminder to take nothing for granted.

AR was shot in the chest on December 2, 2007, at close range in front of a San Francisco night club. The bullet ripped into AR’s chest and parked itself deep in his liver. The shot damaged his spinal cord, causing him to loose the use of his legs. “The bullet was so far in me,” AR says, that removing it would have been life threatening. When doctors operated on him, they decided to sew him back up and leave the bullet inside.

“When my mother asked the doctor how I was, the doctor told her that I was lucky to be alive,” says AR. “My mom was always stressing, asking the doctor, ‘How’s my baby doing? How’s my baby?’  The doctor couldn’t give a solid answer as to whether or not I would survive. I was in a coma for twenty-one days.”

When AR came out of the coma, it was two days before Christmas. The doctor said he would never walk or talk again. AR was 20 years old, with a bullet lodged in his chest, and a tube going into his throat.  “All I could think was that my future looked dim.”

But his family would not let him quit. “This is my path. God has blessed me to still be alive,” says AR. At the time, it wasn’t easy for AR to see anything positive coming from his accident.

Today, things are different. Now AR is on a mission against guns. “I’m all for silence the violence.”

AR is using his music to get guns off of Oakland’s streets. He says his hit song “Don’t Take My Shine” resonates with those who have suffered from gun violence.

The rap world is nothing new to AR. The Bay Area artist started his music career in 2003 when he was 15 years old. He recently finished a tour with rap star E-40, and has collaborated with San Quinn and other Bay Area artists.

“This dude’s gonna be unstoppable. He’s doing something real,” says Steve Owen, a producer and engineer at Livermore’s Burnin’ Burro Studios, where Party for Peace was held. Owen has only met AR once. The rapper left a big impression. “What hit me square in the face with AR was he was a victim of a circumstance, and that did not stop him.”

AR says his message is well respected by other rap artists, and by young people around the East Bay. He has shared his story at several high schools, juvenile halls, and Boys and Girls Clubs. A fan of AR who goes by the stage name Kid Cali says, “AR is a positive influence and an inspiration to the community.”

AR tends to keep his life reflections simple. “I would pray every night to walk again, but I was satisfied to be alive.”

AR will tour the Bay Area this fall, taking his message of peace to twenty schools in forty days. For more information, visit the Life Goes On Foundation website. The LGO foundation was created three years ago when AR decided not to give up.