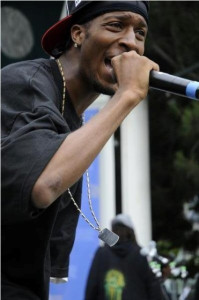 Turf Unity rapper Olondis "O-Zone" Walker was a teenager when he was shot in Oakland. Instead of seeking revenge, Walker said he has "been retaliating through music."

OAKLAND, CA – Many would argue that music is essential to a full life. It makes us laugh, cry and think. It is this idea that musicians at the Oakland Green Youth and Art Media Center explore. The young, Oakland-based hip-hop artists there create music to bring an end to territorial squabbles, known as turf wars, in the city’s streets.

They are part of a project called Turf Unity. Next month, the collective will release its annual compilation CD. Rather than perpetuating the violence they hear in popular rap music, these artists write songs meant to support their communities.

Turf Unity grew out of the Silence The Violence campaign, which was spearheaded by Oakland’s Ella Baker Center for Human Rights. 21-year-old Jhamel “J-Milli-On” Robinson has worked with Turf Unity since it began in 2007. “Turf Unity came out of the frustration we were feeling from the loss of youth, as young as 12 and 13,” Robinson said, as he sat in front of his computer piecing together a new beat for a song.

Turf Unity’s work is unique because hip-hop, to many, is known for its violence and misogyny. 30-year-old rapper Ladasha “Diamond” Berry believes she and other female emcees have a special duty in hip-hop.  Berry explained, “I have a lot to say and I want to reach other sisters. We support each other. We know we are rare.”

Berry has been rapping since age 10. She is inspired by artists like Snoop Dogg, Dr. Dre, E-40 and Da Brat. Early on, she rhymed with the same negative messages she heard in popular rap music.  “I learned to express my feelings in a more positive light,” Berry explained about how her style has changed. “Words can come to life. Now I rap to reflect what I want to actually have.”

Berry, whose mother was murdered when she was only 2 years old, believes that Oakland communities can curb street violence by reminding young people of their worth. “Kids want to be told, ‘No.’ They want to know someone cares. No one’s told them, ‘You’re beautiful, you’re brilliant, you mean the world to me.’” Berry credits her grandmother with providing that kind of encouragement to her throughout her life.

The topics she and Robinson rap about – activism, community education, and youth empowerment  – differ greatly from what’s played in the mainstream hip-hop outlets. These two, however, have no worries about losing fans. “I’m in the streets,” said Robinson. “I connect with people. All you need is a dope beat.”

“For every lost fan, there’s going to be a gained fan,” Berry agreed. “I have a new target market.” That market consists of young people who are affected by violence, gangs and drugs. “Our job is to change minds, as well as the lifestyle and culture of violence in Oakland and the world,” Berry said of her musical mission. “It’s up to us. We didn’t make the crack epidemic. We’re products of it. I make a change where I can make changes. That’s my responsibility.”

Tennis player-turned-rapper, Olondis “O-Zone” Walker, 20, can attest to Turf Unity’s mission. He was shot when he was only 16 years old. “I wasn’t even really that in to rapping until I got shot,” Walker explained. “I’ve been retaliating through music, rather than on the person that did it.” he has since release his own album, “Tears of Memory.”

Turf Unity works to bring people from different parts of Oakland together. Walker admits that he was not immediately able to forgive those that wronged him. He and the rest of Turf Unity’s artists now create and release music that aims to fulfill the project’s mission of bringing together a generation divided by geographical lines.