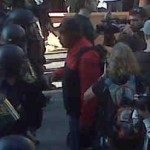 OAKLAND, CA – Oakland Voices correspondents have spread throughout the city to get reactions from residents following the Johannes Mehserle verdict. The former BART police officer was found guilty today of involuntary manslaughter in the shooting death of Oscar Grant III last year.

“This is an absurd miscarriage of justice. It was an obvious murder,” said Oakland resident Duane Deterville. “Everyone saw the shooting. Anyone who’s not a racist can see it.” Deterville also said the jury’s decision, “underlines how much hasn’t changed in regard to policing of black and brown people in this country.”

Observing the reaction of Oakland residents to the verdict, Deterville said, “People are not happy. How could you be? People are glad the shooting and the case were visible enough to make it to court. But there’s a feeling there was some game playing with the judge and the jury.”

When asked how he thought people should respond to the verdict, Deterville said, “Ah! That’s a tough one. All I have to say is, timing is everything.”

Sammy is a security guard and a 25 year resident of downtown Oakland. As protesters shouted “burn this justice system down” and “we don’t got no time for talking, it’s time for violence,” Sammy said people in Oakland should “keep their heads straight” and avoid violence.

A resident named Dr. M was handing out protest literature near the corner of 14th Street and Broadway in downtown Oakland. About this verdict, he said, “This isn’t our party. This is the white people’s party. We had our party. Oscar Grant was already handled by Lovelle Mixon.”

Mixon was an Oakland man involved in a shootout that included four OPD officers on March 21, 2009. Mixon and the four officers died. Dr M’s view points echo the sentiments of many in the community who feel the officers’ deaths were payback for years of police abuse.

Many Oakland residents see the jury’s decision as deeply flawed. Dr. M said it points to something wrong with the way America’s legal system treats black people . “We ain’t gonna get justice in America. This is all about race. That’s all America is, is racism.”

Actor and comedian Mark Curry is an Oakland native who expressed his frustration with the trial’s outcome. “The word ‘guilty’ hasn’t been said in about 30 years involving cops.”