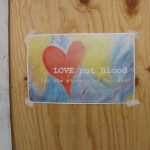 OAKLAND, CA – It was dead calm, like the eye of a storm, at the corner of Webster and Seventeenth Streets on Independence Day afternoon downtown. Security gates, padlocks and roll-down doors are not uncommon sites as this city struggles through a sour economy. But plywood-covered windows hinted at something else. 17th Street looked ready for a big storm: Hurricane Mehserle.

Posters in most shop windows seemed positioned to guard against that impending gale. Oscar Grant’s face smiled out from behind locked gates, next to signs for manicures, lattes and Mexican food. In various forms the slogans called out, “justice for Oscar Grant.” The expected storm wasn’t natural. It was political.

Grant, a black 22 year old butcher from Oakland, was shot in the back while lying on the Fruitvale BART platform by Johannes Mehserle, a 28 year old white BART officer with two years on the force.

Mehserle’s trial ended last week in Los Angeles. The jury was sent home for the weekend, but will return to the LA courthouse tomorrow. There could be a verdict by Tuesday evening and opinions on the public reaction run from bad to worse.

“There is going to be trouble, whatever they decide,” said Larry, a long-time white resident of West Oakland’s South Prescott neighborhood, who prefers not to give his last name.

Martinez and Campbell also agreed there could be trouble in downtown Oakland if Mehserle doesn’t get prison time for killing Grant. But Martinez wondered why protesters always turn their anger toward businesses that had nothing to do with the incident. “Why don’t they burn down the courthouse, burn down the police headquarters?,” said Martinez, not to suggest vandalism but to question the logic of certain violent protesters.

Campbell replied, “they got the police station guarded.”

Across the street, another white neighbor who chose not to give his name said the shooting was racially motivated. “We live in a racist society. We have to look at that in these situations.”

The question of whether the shooting of Grant was just a terrible accident draws little sympathy for Mehserle. On the issue of the specific verdict, few residents know the implications of the various degrees of homicide available to the jury. None can say what justice in the case would really look like, but the general opinion is that Johannes Mehserle needs to see the inside of a jail cell for a long time.