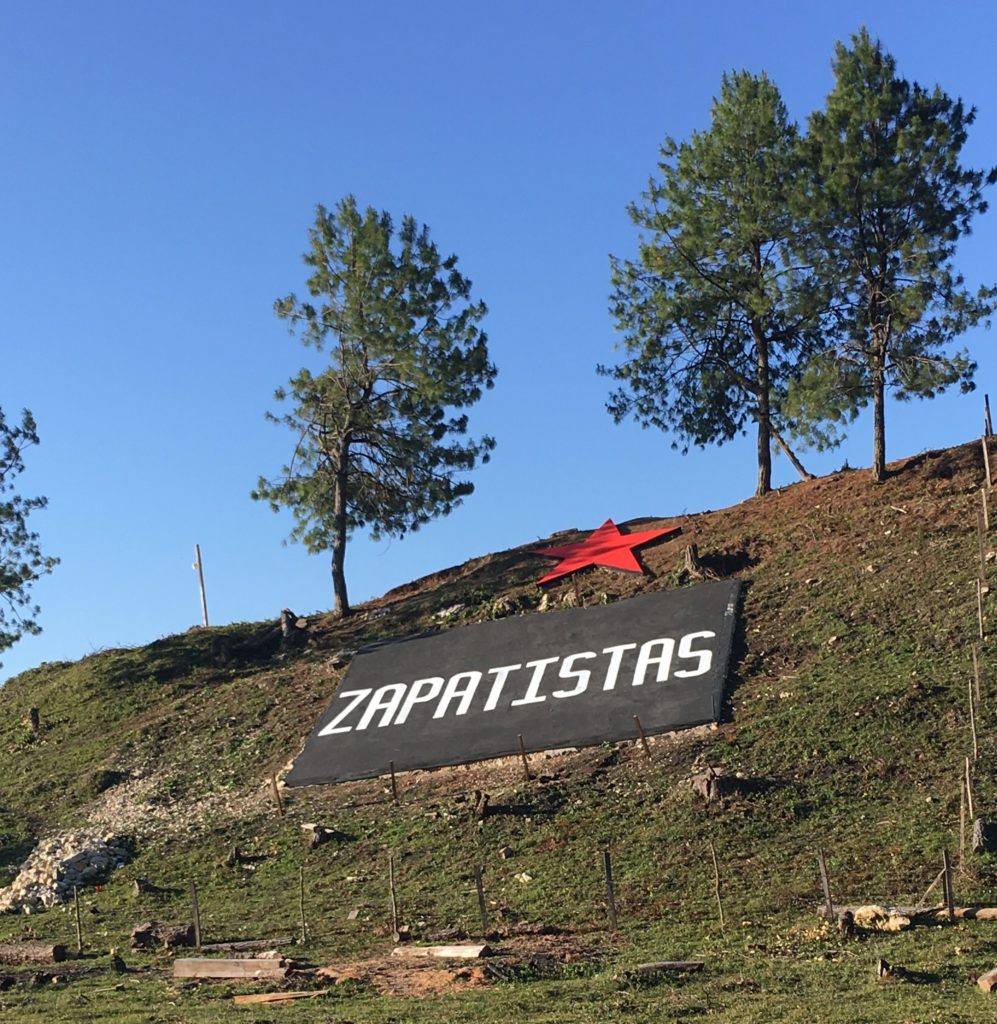 Zapatista star that greets you as one enters the caracol

I heard the music in my dreams first and woke to the familiar sound of an accordion playing. It was the third night of me sleeping on the land and in a tent, that in itself was a first for me. They were playing the infamous “Caminos de Michoacan” and as I sat up my eyes filled with tears of joy. As a Michoacana- rooted person, I felt so much pride and gratitude for just being there. 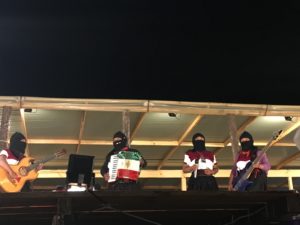 the amazing and unforgettable Banda Rebelde. They woke me up many nites and appear in my dreams still.

I got up and made my way to the bathroom, passing the stage where Banda Rebelde (Rebel Band) was filling the air with more music. Instead of going back to my tent to sleep, I stood among the crowd and swayed my somewhat sleepy hips to the music. They played four more songs for us before it went quiet. I walked back to my tent with a big smile on my face and just prayed in gratitude for everyone and everything. I had finally made it and was immersed ever so briefly in the world of the Zapatistas. 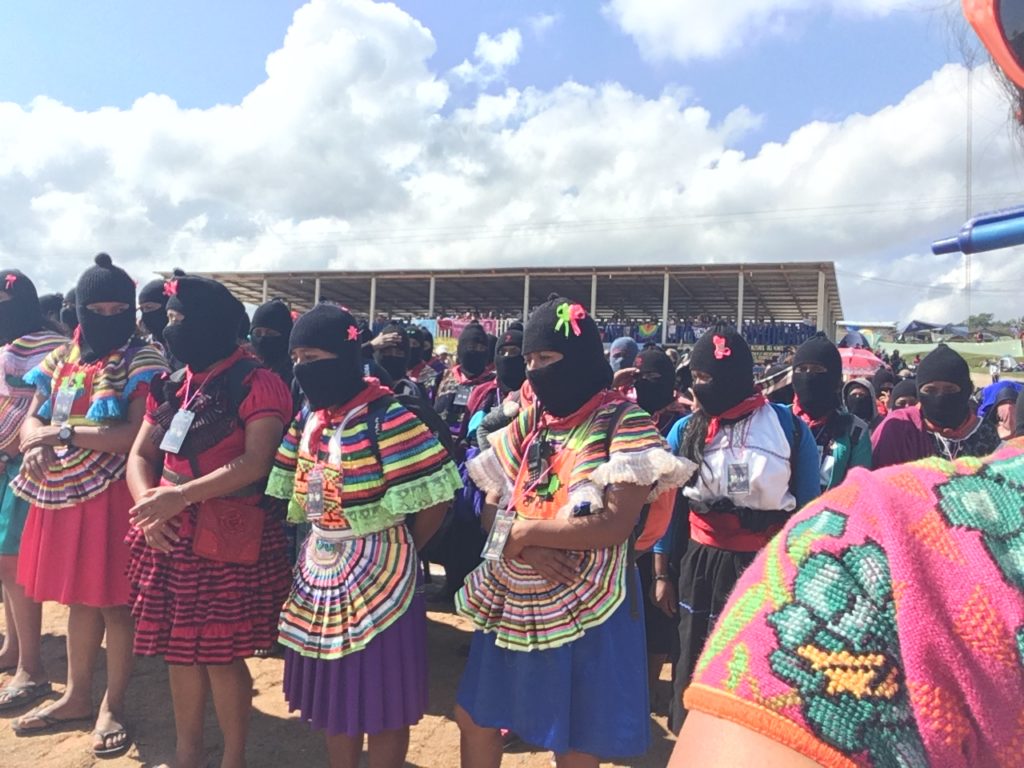 Zapatista womyn and author (with pen) listening to opening speech

In attendance were approximately 5,000-10,000 womyn from all over the world. We were hosted by 2,000 Zapatista womyn (womyn is the non-patriarchal spelling) at one of five of their caracoles ( the term Zapatistas use when referring to their autonomously protected lands) about four hours outside of San Cristobal de las Casas in Chiapas, Mexico. For three magical and unforgettable days in March, we became part of a whole new world that the Zapatistas have been cultivating for over 20 years. There were over 200 workshops that were given for two of those days-topics ranged from decolonizing HIPS, how to make moon pads, weaving our stories and the importance of gender fluidity in all struggles.

For those who don’t know, Zapatistas are a group of indigenous- led warriors who represent themselves as the original indigenous protectors of the land in the Mexican state of Chiapas. (Zapatistas take their name in honor of the fabled Emiliano Zapata (1849-1919) of the Mexican Revolution (1910-1920) who believed and fought because he firmly believed that the land belongs to the folks who actually work it.) 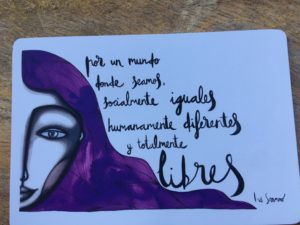 translation- for a world where we are socially equal, humanely different and totally free

On New Years Day 1994, they took an epic militant stance to protest NAFTA (North American Free Trade Agreement) going into effect. Knowing full well that NAFTA,  like so other many papers/treaties, would NEVER benefit those who actually work the land. It decimated the livelihoods of a huge population of folks who made a living off of the land. They wear masks to show they are one community and to protect their identities from government officials. 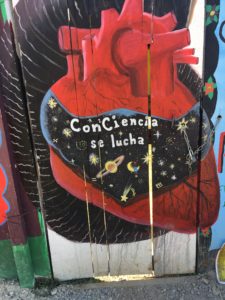 “Being conscious is a fight /struggle.”

Its devastation continues in this very moment. Whole communities, many indigenous, lost any meager profits they made as global corporations moved in, literally destroying and contaminating lands and people in their rush to sell their “products” globally. For centuries the indigenous communities in Mexico especially in Southern Mexican states’ (Oaxaca, Chiapas, Yucatan, Quintana Roo,Tabasco) precarious existences have been dependent on the land, just like all ancestors. When the food supply died out, they were forced to migrate farther north. How else do you explain the explosion of forced migration that happened after 1994, not just from Southern Mexican, but from many other indigenous and mestizo communities farther south into El Salvador, Guatemala and Honduras?

The response from the Zapatistas was “YA BASTA.”(Ya basta translates to Enough.) And it was and is beyond beautiful. 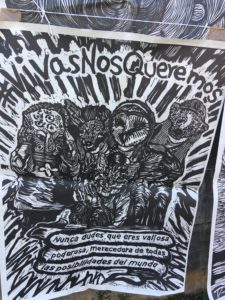 Alive we want one another. Never doubt that you are valuable powerful and deserving of all the possibilities in this world.

And if folks are keeping up, NAFTA is being re-negotiated right now and I can guarantee you that the Zapatistas or anyone who truly gives a shit about the land and its relatives (plants,trees, animals) have not been invited. It was with this backdrop that a group of Zapatista womyn invited us out to their lands. Since its inception, womyn and the decolonization of the patriarchy have been central to the Zapatistas agenda. The invitation sent out literally asked us: Cansadas del patriatico/tired of the patriarchy? 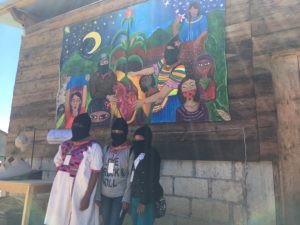 mural made during gathering by artists inspired by Zapatistas womyn, who then posed for us while giggling the whole time 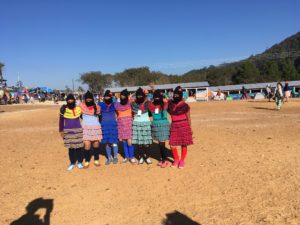 One of the Zapatista futbolista teams fitted out

For the next three days I met folks from all over the world, like a young womyn who is part of a collective in Tepic,Nayarit that is attempting to bring film back onto the silver screen of a theatre they are trying to restore, many artists; all of us agreed that the gathering was life changing. I even had a homegirl from San Luis Potosi flirt me up and attempt to make out with me. A community of folks across all intersections coming together to laugh, play, learn, share and cultivate medicine. Fucking magic is what that gathering was.

mural made during gathering by artists inspired by Zapatistas womyn, who then posed for us while giggling the whole time

I was inspired and reminded that without the healing of womyn we will not survive. Patriarchy in all its forms has harmed everyone, beginning with our sacred lands; the further we have moved away from honoring her, the more lost we have become. We must stop betraying our purpose and begin to truly honor if we are to survive as a species. Our healing is necessary and the mere existence of the Zapatistas these 20+ years later, and what they are doing to create a better world, is proof positive of that ceremony. 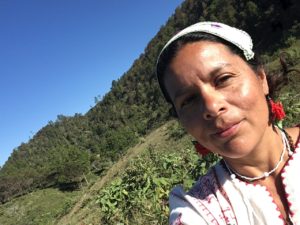 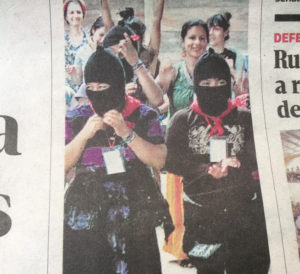 The author in a photo in a Chiapas newspaper