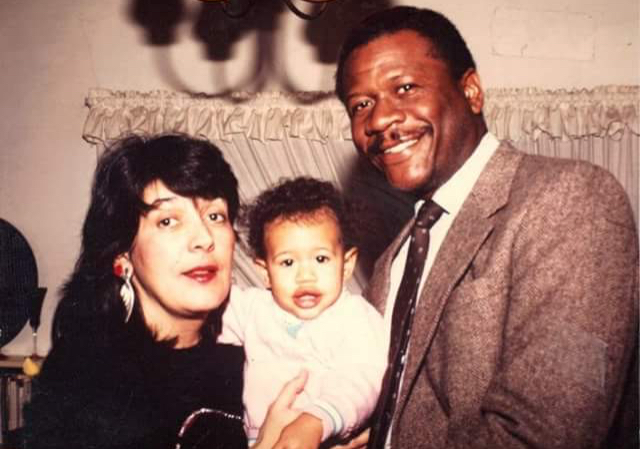 My mother, me and my father

The Academy Awards were on and she had just put me to bed. My mom flopped down onto the couch, exhausted from the few days she had been with me alone since my dad had left for a conference on the East Coast.

The phone rang. It was a doctor from an emergency room in New York. I don’t know how they do it, doctors. Call someone they’ve never met to tell them a loved one will not be coming home, that they are no longer breathing air into their lungs.

My mom said nothing and hung up. A mix of shock and disbelief. The doctor called back. “Is there anyone else home, or a neighbor that I can talk to?”

My mom had been working on an anniversary celebration in homage to 50 years since Dr. Martin Luther King’s famous “I Have a Dream” speech. She did a lot of community organizing for different cultural events all over the Bay Area. The night she met my father, she had been working at the Dr. King event during the day in the city. Afterward, she and the other organizers headed to the East Bay for a birthday celebration for La Pena Cultural Center in Berkeley. My father was there; he had been asked by his friend John George, an attorney in Oakland, to appear for him and speak at the event. They met. They fell in love. They decided to start a life together.

My father had gone to Maryland for a conference on marriage and family therapy. Since he was on the East Coast, he made a trip to see his two older daughters, Courtney and Hollister, in New York. He took my sisters to see “The Color Purple.” It had just come out in theaters. My mom spoke to him earlier that day, and now he was headed to pick up my sister Courtney. As he was driving, he began to choke on a chicken bone and swerved into a pole in front of the New York Public Library.

My mom describes losing him as being thrown into a zombie state of shock. She couldn’t sleep. She would be up with the lights on, check on me and check to see if the front door was locked, terrified and in a daze. My grandmother and aunt flew in from Chicago to stay with her and help with me in the beginning. My father’s brother flew to New York to bring my father’s body back.

My mom was a newly- married mother of a 15-month-old baby thrust into the “business of dying.” The shipping of bodies, funeral homes, life insurance. Death had arrived and it had taken my father. My mother began to drown in a pool of sorrow, bouncing between visitors and funeral planning. And then silence. In the beginning it’s a whirlwind and then everyone else goes back to their lives and there you are trying to make sense of it all.

A dark storm with unforgiving winds and lethal lightning had moved in overnight and destroyed my mom’s life as she new it. She was terrified.

She had me a little later in her life. She had always wanted kids but it wasn’t until her late 30s that she met someone who she felt a true connection to, someone who she wanted to build a life with and bring a child into the world with. It wasn’t until she met my father that the time had come to take that leap and join forces with another human life to create life and dive into the waters of each other’s soul.

It wasn’t that she wasn’t familiar with loss. Her father had dropped dead while playing tennis on her 18th birthday. Boom- like that – and her best friend was gone. But now staring death in the face yet again, it was different.

My mom fell into a depression. She kept thinking my father would return home from his business trip and the front door would swing open with his great tall presence beaming with a smile. He didn’t. She cried and cried and cried. At first she wasn’t sure how to go on. She didn’t know where to start. She sought out a grief group for widowed mothers with young children but had no luck. She reminds me of my 15- month- old self getting excited when I saw a truck like my father’s drive up to the house. And then watching it drive by in disbelief.

Her life had crumbled. Yet my mother is resilient. Maybe it was partly because of me. She couldn’t let herself get sucked into the abyss of sorrow and pain because she had a baby who needed her to survive. She needed to survive. We spent a lot of time outside. She took me to the park and would sit and watch me. Sometimes she would cry.

It was just the two of us. She didn’t have any family out here, and she wasn’t close to my father’s family. And so it was, the two of us. The pain in her eyes was her new permanent state of being. Yet despite this pain, she would rise each day and find the strength to love me and continue on.