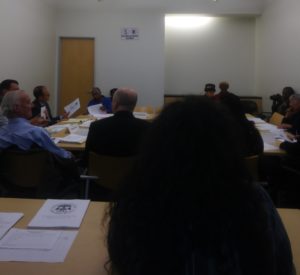 The March meeting of Oakland’s Community Policing Advisory Board

The Community  Policing Advisory Board (CPAB) is a group of 15 that meets once a month to communicate the thoughts of the community about policing matters to the police, city council, city  staff and mayor.

The board monitors, reports, make recommendations, advocates for and assists in educating and informing the public. It also authorizes neighborhood crime prevention councils and mediates disputes.  The board meets the first Wednesday of every month. There’s one representative from each city council district and one at-large, one  from Neighborhood Watch, one from the Oakland Housing Authority, one from the Oakland Unified School District, three from the mayor’s office and one city administrator staff person. The board is  part of the city administration, along with 14 other offices that work with/for the mayor’s office and the council.

On March 9, 2018, three of the seven Oakland Voices (OV) correspondents of the Cohort 6 OV group attended the Community Policing Advisory Board’s March meeting.  It was held at the Oakland Police Department Eastmont Substation located at 2651 73rd Avenue in East Oakland. The agenda,  including minutes from the previous meeting, was posted on the website, so the correspondents knew ahead of time what topics would be covered.

We learned that policing includes alternatives to dialing 911 that involve the community participating in groups such as the Neighborhood and Merchant Watch.  Only a few members of the CPAB were present when we arrived.  It was a well-lit, medium-large room with a large oval table and several chairs.

There were approximately eight chairs for the audience but plenty of standing room.  Only OV correspondents and two community members attended. The meeting was scheduled for 6-8 p.m. but started and ended a little later.

The board operated in an orderly and succinct manner, following the order of the agenda.  They were professionally dressed and well-spoken. It was like observing a city council meeting where there’s a lot of talking, paper shuffling, voting and agreements made, and where some disagreements may occur and the appearance of momentary chaos may ensue.

They voted on matters and then entered them into the minutes. The city administrator staff member, Joe DeVries, led each topic of discussion and mentioned that he records the meetings on his phone.  There was discussion about him translating the entire meeting but he said that it was too time-consuming. If the other members had something to say, they’d gesture by lifting their finger, awaiting acknowledgement or respectfully spoke outright.

The entire board agreed to approve a recommendation for increased funding for leader training for neighborhood crime prevention councils. One of the board members mentioned that neighborhood service coordinators were not invited to be a part of the training for community relations officers but two members of the public were. Outraged, the board demanded that they must be involved with the training of community relations officers so that they could better serve the community. After much discussion, the board agreed to forward their changes to the annual report to city council.

There are more men than women on the board.  Most of the members spoke at some point.  Although Akiba Bradford, who appeared to be a young, African-American woman, was knowledgeable and committed, it seemed that her comments were dismissed frequently.  Other members listened briefly, but would cut her off, adding their input and never fully discussing what she shared. DeVries and a couple of other more vocal middle-aged and elderly men didn’t share the same experience.  Even though one of them spoke at length, he wasn’t interrupted.

Both of the community members, including Assata Olugbala, were African-American women. One did a lot of nodding of her head and talking out loud but not directly to the group.  Olugbala was more vocal and emotional.  At one point, board members told her they must proceed with the meeting.  Although, she threatened to continue on with her plea , she quieted down a few minutes later.

It was the last meeting for two members. The meeting concluded with the nominations and vote for the CPAB chairperson to replace the departing chairperson, Jay Ashford. Ravinder Singh and Cathy Leonard were both nominated with Singh ultimately being voted in to take the position. This was also the last meeting for board member Don Link as his term had expired.

The CPAB’s next meeting was scheduled for April 4th at Hearing Room 3, 1st Floor of Oakland’s City Hall.  According to the agenda, if one wants to speak, one must fill out a speaker’s card beforehand. When you speak, you must state your name and the organization you represent, if any.  If you can’t make the meeting, you can share your thoughts with the CPAB on Twitter, their handle is @oaklandcpab.  Also, their names and contact information can be found on their webpage, as linked above.  The website includes meeting agenda archives, information about Resolution 79235 (community policing program), and their bylaws, which details why CPAB was formed, what the board and each member does, what one has to do to become a member, and how the meetings are run.