Getting to Know Each Other:

About 10 people have already gathered when I arrive on a cool and sunny Saturday morning at Primera Iglesia Presbyteriana (1st Presbyterian Church) on High Street in Oakland. In a short time, the group grows to over 20 people, college students through retirees, most of them Latinos.

We are in the basement of the church, in the meeting room-cum-dining room. People are sitting at long tables, getting to know each other, while eating a delicious breakfast of homemade oatmeal, pancakes, Mexican pastries, and fruit. We’ve been asked to share anecdotes of Oakland that are important for us. 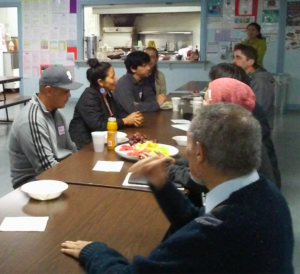 Sharing breakfast at the beginning of the retreat/workshop

Participants have come to attend a retreat/workshop, Strength from the Roots (Fuerza de la Raíz), which is designed to strengthen solidarity and leadership in the community through sharing stories and music. The program is sponsored by the Interfaith Movement for Human Integrity (http://www.im4humanintegrity.org/) and today’s retreat is one of four held in Oakland. Francisco Herrera, musician, educator, and activist, is the facilitator for the retreats.

The three-hour-long retreat/workshop is conducted in both English and Spanish. After being welcomed by Pastor Pablo Morataya, Herrera begins playing his guitar and singing This Little Light. People join in softly, hesitantly, but increasingly more audibly. Then he plays De Colores, which inspires more robust singing from the group—even people who do not speak much Spanish are familiar with this popular children’s song and join in. 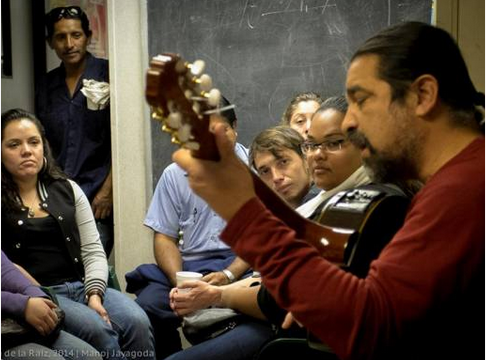 Who Are We and Where Are We From?:

We move over to the wall, where two empty charts are posted—they are labeled We Are From/Somos De and Agreements/Acuerdos. People call out where they are from and Herrera records our origins, which range from Guatemala to Laos, Mexico, Oakland, and beyond. 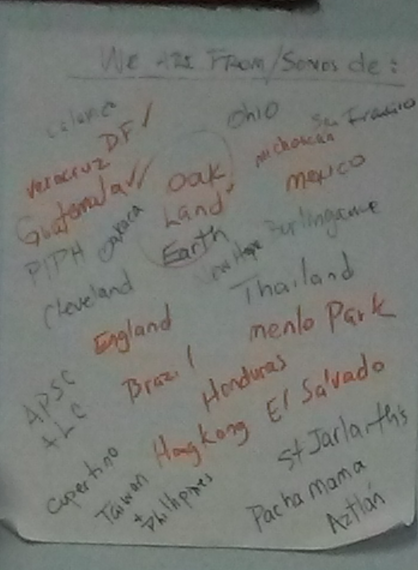 People were born in many places around the world

“We’ll be sharing stories, migration stories, and this requires trust. We’ll put them in some kind of artistic endeavor,’’ explains Herrera. The group then generates some norms for the work that will follow (e.g., Listen without judging, Be truthful, Give space.) “This is our constitution. Laws are nothing more than agreements,” says Herrera. 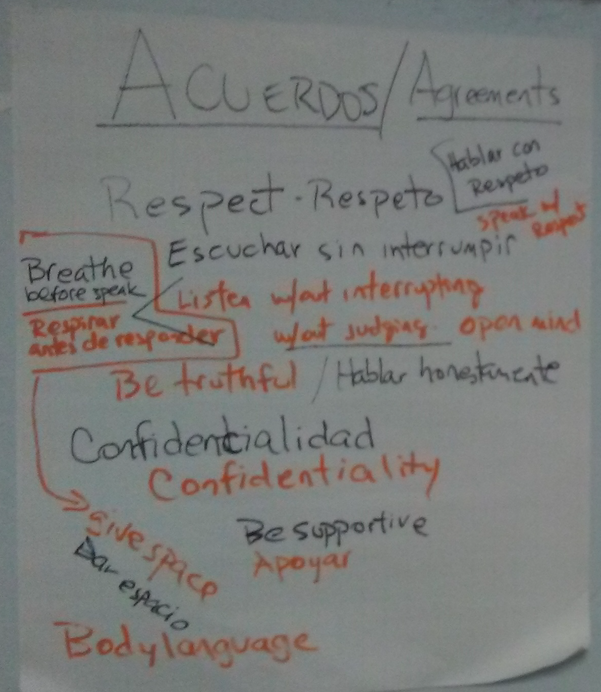 Group agreements/acuerdos for the day

The Deep Wisdom that Comes From Families:

We move to a circle, which allows us to see and hear each other more easily. Herrera talks about the deep wisdom that is within family stories and traditions. We share some of them with neighbors. Shandel tells us, “I take manzanilla (chamomile) to calm me.”  Fernanda tells us how her mother puts plants all over the body when family members are in pain. Phil’s father used to say, “You have two ears and one mouth, so you should listen double and speak less!” The group laughs, while also recognizing the wisdom in the saying. Irma tells how her family eats caldo de pollo/chicken soup for the gripe/flu . . . and uses Vicks VapoRub, known in Central America as vaporú. There’s a lot of laughter as people share how Vicks VapoRub is brought out for anything and everything in their families.  (I have used first names for participants because some members of the group are undocumented and did not want to have their full names used.)

A short while later, in smaller groups, participants share their stories of migration.  Danny’s family is from Laos and he was born in a refugee camp in Thailand.  “My parents didn’t want to talk about the trauma of the war. I’ve learned that it’s not good to suppress trauma,”  says Danny. Other attendees share how they came to the country as children and are still undocumented.

We return to the whole circle and Roberto plays some flute music, a peaceful, reflective piece, which we listen to quietly and thoughtfully. 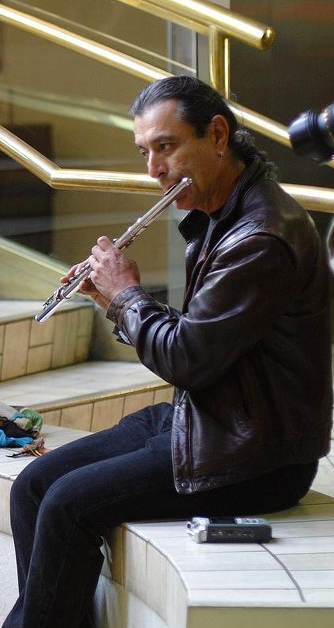 An Experience From Which You Learned You Are Part of a Community:

“Share something that’s bigger than you that you experienced and (from which you) learned that you are part of a community,” says Herrera. The issues that people share vary a lot, but several center on the impact of the 2016 election and the new president. Olga tells how the election affected some members of her church community who were attending an English class. Most of them don’t have documents. “Some people thought they should leave the next day. Praying together helped. In time, the people were able to continue coming to the English class together,” says Olga.

It becomes time to transfer these experiences into collective artistry. People divide up into groups that focus on writing poetry, composing a song, choreographing a dance, or creating a picture. Herrera explains that what is created will go to pianist/composer, Ellen Hoffman of the Oakland Symphony, along with material created in other retreats held on other Saturdays in Oakland. Hoffman will turn the ideas and stories into songs, which will be performed in concert on April 29. 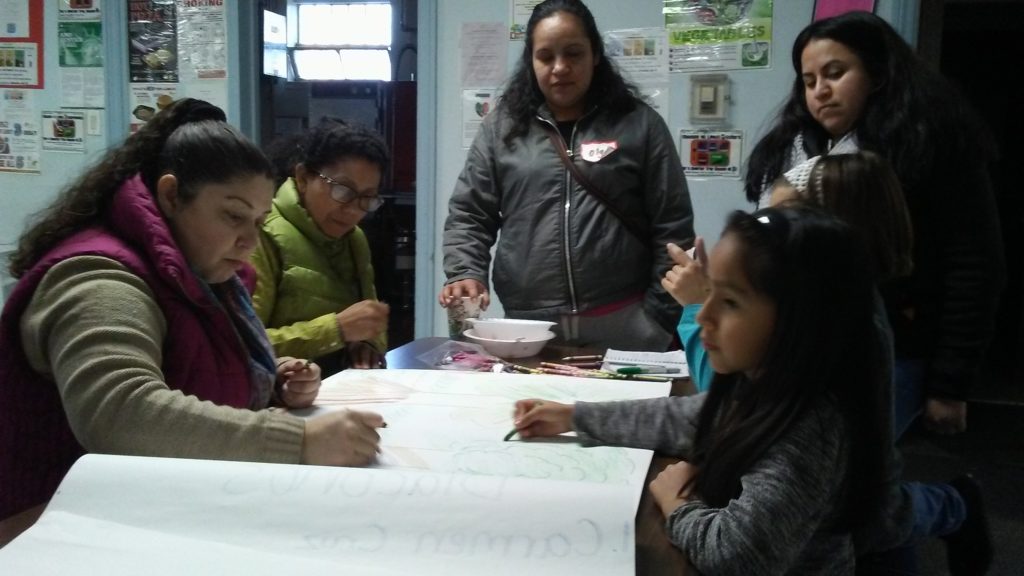 A group works on a collaborative picture 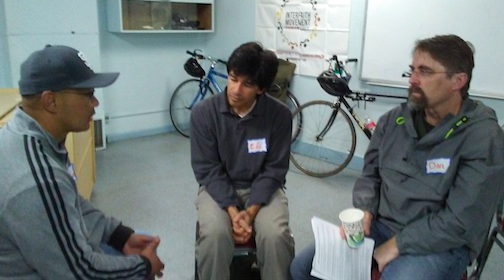 A writing group works together to write poems

After working together for a while, the groups share what they have created. The five artists lay their large picture on the floor so everyone can see it.  Irma explains the picture: “We can see two trees that signify the two cultures, Latin American immigrant and American. We come to an unknown land, where we have to put down our roots. The branches of the trees are the generations. And the colors are the diverse colors from Latin America and America.  And we live under the same sun and the same moon and the same sky,” she says. 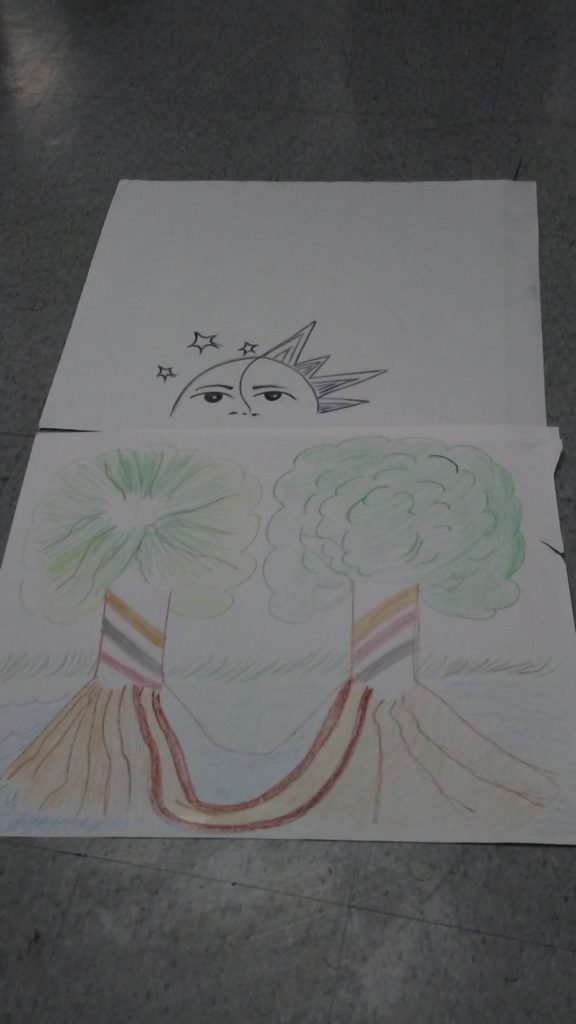 Poets, Eli, Danny, and Dan follow. Eli writes of losing his roots. Danny’s poem is about the struggle of all people. Dan explains that he has lived with a lot of Cambodians and they have a saying, “When the elephant fights, the ants get trampled.” His poem is metaphorical and is about living with the elephants. 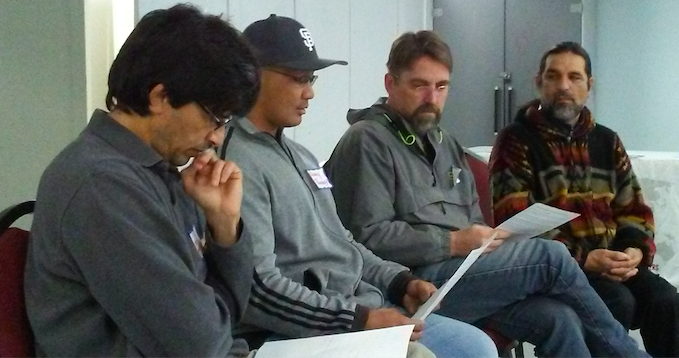 The song group tentatively shares its creation and then the dance group moves to the center of the circle. In the dance, people pass each other repeatedly and slowly come closer to each other—first they shake hands and finally they hug each other, an abrazo.  The song and dance groups decide to integrate their pieces, which they perform to Roberto’s flute accompaniment. But, not until the entire group has learned the words to the song and can join in.

Why Did People Come To the Retreat and How Are They Feeling at the End of It?

The reasons people give for coming to the retreat vary.  “I’ve been looking for community and connecting with people. I like learning from people and healing the community,” says Shandel, adding that the retreat/workshop has exceeded her expectations. 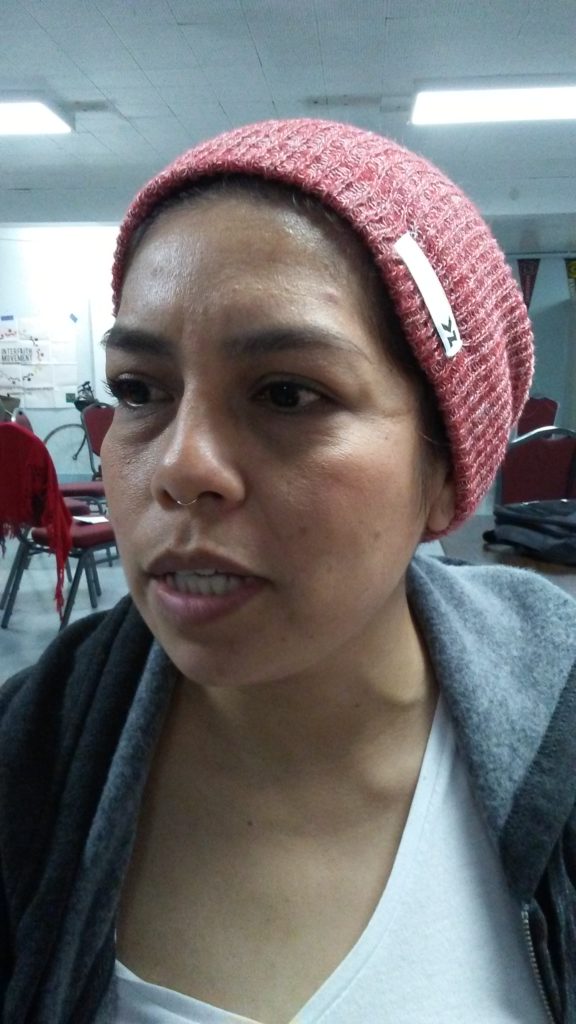 Shandel reflecting on the retreat

At the end of the workshop/retreat, it’s time to reflect on the day. It reminds Miriam that she is not alone. “This moment has helped me think that I’m not the only one who has suffered. There are people who have also suffered and have overcome. I can still say I believe in humanity,” she says.

In a final sharing experience, people generate words for how they feel now. A long list of terms is quickly generated. It includes unity, regeneration, community, and hope. Several people also comment that they hope that it will not be the last time they meet with this group.

There are several follow-up sessions (workshops and rehearsals) in preparation for the culminating community chorus celebration on Sunday, April 29 from 2:00 to 5:00 p.m.  It will be held in Oakland, location TBA. Everyone is invited to all of these events. For more information, contact Francisco Herrera at (415) 812-9362.