Some people wait on life to define them and others design and define life for themselves. When you get that opportunity to show off your design, make sure you print big.

In the early eighties, Dawaud Muhammad remembers black homeowners whose parents had migrated to Oakland from Louisiana and Mississippi as his neighborhood demographics. For him, childhood memories include meeting up on bikes with his cousins in East Oakland, living big. But a few years prior, Muhammad and his brother were waiting on grandma to pick them up from an East Palo Alto foster home after being taken from drug- addicted parents.

“See my grandma, she made us believe like we were already rich. Anything we wanted, she would buy,” Muhammad said.

But as Muhammad puts it, “You grow up and you ain’t as cute no more. Santa Claus don’t exist no more.”

Before long, the cycling cousins had become a crew of car thieves.  False confidence led Muhammad to go against his rules and drive the latest stolen Gold Tahoe through the streets of East Oakland where he caught the attention of Oakland Police officers while riding down 73rd, a popular and highly- patrolled street. He was pulled over and arrested.

After a few uncomfortable nights, he was able to see a judge and he also saw his grandmother in the court room in tears. Muhammad decided that the system wouldn’t get him and after his release, he returned to school to complete his senior year. He frequented the library and was introduced to two books that ignited him, “The Autobiography of Malcolm X”  as told to Alex Haley and “Message to the Black Man” by the Honorable Elijah Muhammad of the Nation of Islam.

During this time, he’d been watching Dr. Yusef Bey, a black Muslim teacher and multiple business owner, three times a week on SoulBeat.

“Dr. Bey was different. He actually had his own business, his own bakery. He was really living it. Not just talking about what we should do but actually doing it.” Muhammad explained.

Coincidentally, he saw some designers on the same channel selling shirts at the “Festival by the Lake”  and they had a store across the street from the bakery. Muhammad was interested in the business, so he attempted to sell their shirts. After limited sales and requests for a wider range of designs, he figured he needed to create his own prints.

A few weeks later while standing outside of the weekly business meetings held by Dr. Bey, he overheard someone proclaim to be a print manufacturer and introduced himself. With his new contact, Muhammad was ready to print his first run of 50 custom tees with a design he already claimed would be his first. It was a grimacing face; representative of the characters he saw in the streets daily.

When he received the call that his order was ready, he rode his $350 Diamondback bicycle to downtown Oakland by the federal building and hoisted the plastic bag on his back to ride the bundle all the way back to the 20s. He needed a team. He reached out to a few people to work with him and learned quickly that the t-shirt game wasn’t an envied position.

“I learned that everybody ain’t a hustler, some of them are just drug-dealers,”  Muhammad said.

Muhammad was introduced to brothers Bryan and John Thomas, a team of graphic artists from North Oakland and had them make changes to the face he’d originally printed.  “Big Pimpin”, the modern version, was born.  Muhammad also began designing “Turf” shirts that represented the popular blocks in the bustling town. His first set-centric design was fashioned for the blocks in the 80s in East Oakland. They sold quickly and he was even visited by local heroes, such as Rappin Ron and ANT Dawg. 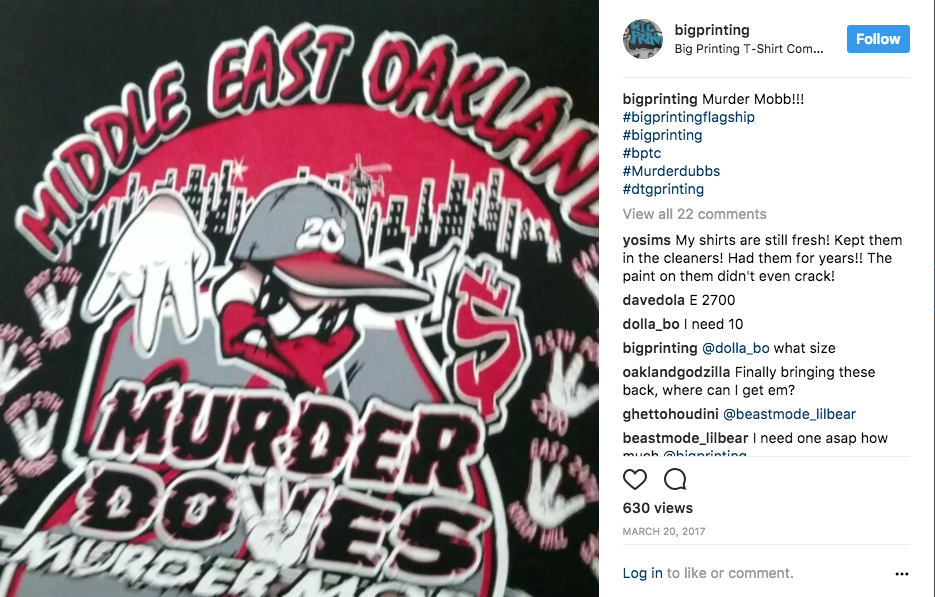 The collection of turf clothes inspired by living in the streets of East Oakland always received support from those who felt represented by its style or believed in its authenticity. As outreach grew, Big Pimpin Turf Clothes (BPTC) was featured in local magazine 40/80 Hip Hop. During the interview Muhammad met marketing genius, Bijan Kazemi. The relationship led to many celebrity connections and  pictures of moguls in the BPTC brand, including the legendary Mac Dre, Mac Mall, MC Ren, Master P, Outkast, and Ice Cube.

Big Pimpin Turf Clothes were stocked in Oakland’s esteemed shirt shop T’s Wauzi. Through that contract,  Muhammad met  Snoop Dogg, a major accomplishment for the time. The brand boom continued and Big Pimpin profiled on the station that helped inspire Muhammad – SoulBeat. While he was being interviewed, his cousin met a reporter for the Oakland Tribune, Chancey Bailey, who also wrote a piece on the Big Pimpin Turf Clothes brand.

Muhammad began to focus more on which printing style made the crispest lines, most vibrant colors, and the most durable designs. He became interested in printing himself and purchased his own manual equipment.

Big is Just the Beginning

While in Bayfair Mall delivering his product, Muhammad met a young woman who caught his eye. After introducing themselves and learning about each others’ complimentary qualities, the two became inseparable. After learning about his business, Kesney shared her insider business experience and with a little nudging on the name, Big Printing T-Shirt Company was born.

Big Printing T-Shirt Company prints for the largest streetwear brands such as DopeEra by popular artist Mistah F.A.B., BeastMode by beloved Oakland Native and NFL star Marshawn Lynch, FOD Brand for Seminary Royalty Philithy Rich, ThizzNation Apparel including the legendary Mac Dre seal, Planet of the Grapes clothing and many other businesses, teams, schools, and artists in the Bay Area and most of the country.

What sets them apart is knowledge of the the bumps in the road that upcoming fashion designers may not foresee. Muhammad hasn’t forgotten about his early roots and BPTC’s most popular package- the “50-pop” that offers an opportunity to start your brand for an economically sound price with high quality. He has gone from the wide-eyed dreamer of the ’90s to the connect he once searched for. Big Printing has put thousands of entrepreneurs in business and not only attained Muhammad’s dream of independence, but has created a platform to share in that opportunity. You can follow BPTC’s work and continuing story on Instagram @bigprinting.

Lauren Richardson, a Chicagoland native, arrived in East Oakland in 2009. While specializing in media production, such as photography, videography, and graphic design, Lauren has worked with grassroots organizations and community campaigns as well as with local businesses celebrities as both a creative director and project facilitator. Her interests include history, political commentary, structured debates, and business analysis. She is currently a journalism student at Laney College and creates independent media through many web outlets under the pen name, L.J. Rich.

By Sabirah Mustafa Growing up in Oakland I used to imagine I was the mayor. Playgrounds and basketball courts would stay open 24 hours if I had my way.  Big wheels and dirt bikes would […]

Computer Love: East Oaklanders Tweet Their Affection for The Town

By Katherine Brown While on this love experience, I learned that you don’t need very many words to define or explain it. 140 will do. To find out more about how folks from Oakland view […]

Oakland has surpassed the 1,000 mark in coronavirus cases. […]