Day after day we face a drug addiction problem in the streets of Oakland that continues to grow as the population increases. Bay Area Addiction Research and Treatment (BAART) has been providing drug treatment and rehabilitation programs since 1977 for hundreds of people with addictions to  heroin, oxycontin, hydrocodone and other opiates. 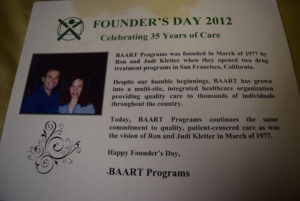 Places like this are known as methadone clinics. BAART started in San Francisco, now they are in five states: California, Arizona, Vermont, Nebraska, and North Carolina. Federal governments, organizations, patients and their families have recognized these clinics for the services they provide.

Veronica King is the clinic director at BAART in Oakland; her clinic currently can serve 550 people, as the number of patients increases year after year. King has been working in this field for 16 years; she said she enjoys helping her community.

“Everybody has the opportunity to change,” King said.  “Changing your life is a progress, not perfection”

As I was walking around BAART, I met a young patient who was willing to sit down and have an anonymous interview with me. Nancy is 27 -years- old; she has been in rehab four times and willingly gone to two methadone clinics within the last two years. Nancy has spent two years in and out of jail and rehabilitation programs and has used heroin for 12 years; she started using at the age of 15.

“I was your average teenage girl in the wrong circle of people and exposed to drugs,” she said. “But that doesn’t change me as a person”

Every morning Nancy goes to BAART, she gives her name to the receptionist and waits in line to receive her methadone dose. She sees her assigned counselor once a week and gets drug tested once a month.

The methadone doses are served in milligrams and range from 15 mgs to 150 mgs (200mgs in Arizona) based on how much heroin the patient had used in the past. Nancy had to continue to use heroin because her methadone dose wasn’t strong enough to help her function normally throughout the day when she first started going to BAART. She had to request higher doses every day until she got to the level she needed to feel “normal.”

BAART will only allow patients to increase their doses 5 mgs  a day for the first seven days, after that, when patients want an increase, they have to wait three days;  then they can make another increase request in increments of the said 5 mgs. As confusing as this might sound, this is something most patients experience in order to find the right dose that fits their needs.

Nancy offered a mixed impression of the staff. On one hand she said they were hostile towards the patients; she said she thinks the staff does not really care about the patients’ well being, she feels that she is treated inferior and looked at like just another “junky.” But she said she appreciates the methadone and what it is doing for her personal life.

“I appreciate my dose,” she said. “I can continue my life without stress, harming my body or worrying about getting arrested.”

She said she also believes that methadone reduces crime committed by people who would otherwise use heroin.

“Once on methadone, your body doesn’t feel the need for heroin and it prevents the physical and mental desperation that withdrawal causes which can push people into a vicious circle of crime, like stealing, to get their fix,” she said.

While she previously criticized the staff, Nancy said counselors often listen to their patients and don’t judge them for their addictions, even though some of the counselors don’t have an idea of how it is to go through such addiction. King said every counselor deals with an average of 35-40 patients.

“Most people in rehab are there forcefully, usually by their families, relationships, or court orders,” she said. “Which makes inmates use drugs in rehab as a way of rebellion because they feel oppressed. You need to want to change to stop using, not by force.”

Methadone clinics are never advertised but it is something everybody should be aware of. Unfortunately BAART is funded by its clients, but its rates are affordable. BAART also provides their patients with hepatitis testing, local job listings, and even contacts to employers who will hire people with criminal records. You can find them at 1124 International Blvd. Oakland, CA 94606. Phone (510) 533-0800.