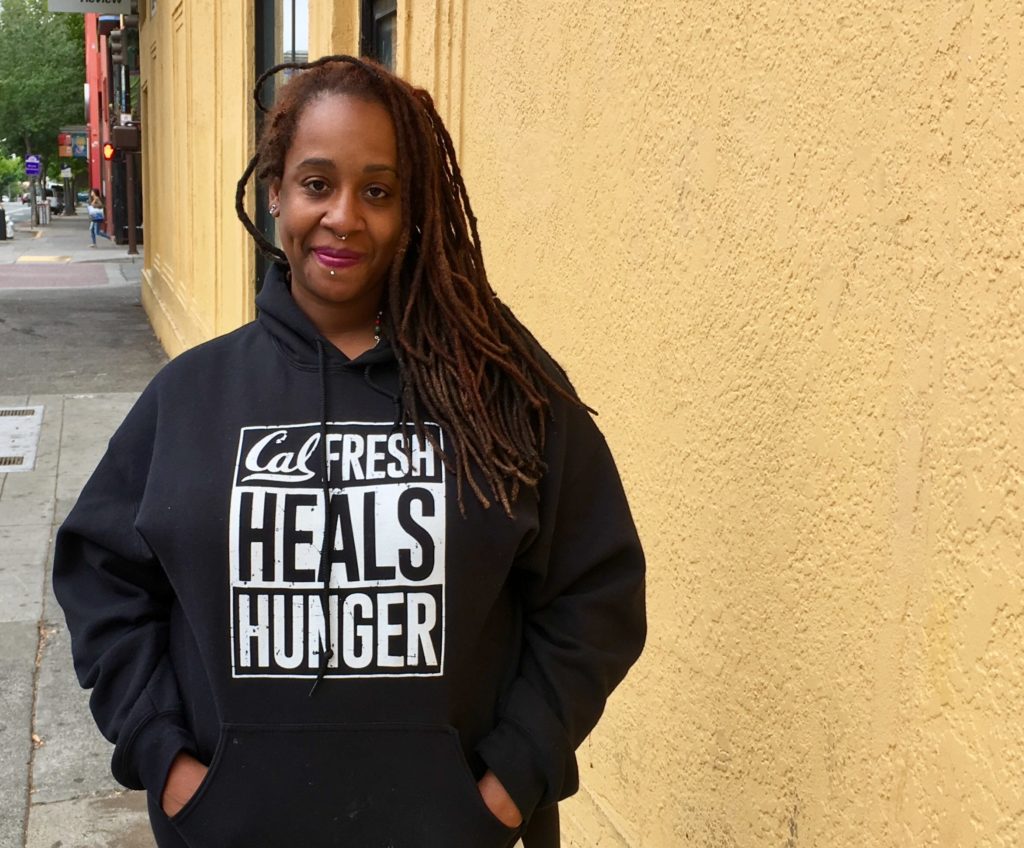 Shalita Williams, recalls some early brushes with the law.

“I started coming in contact with the law when I was 14, when I was caught stealing at Woolworth’s. I wanted to see if I could I get away it. I wasn’t a good thief; my stealing career was over,” Williams said, looking back over the path that led her to juvenile incarceration, giving birth while in shackles at 16, several stints at the Santa Rita Jail, and now preparing to graduate from UC Berkeley with a double major in Spanish and sociology, and plans to pursue a Ph.D. program.

Williams’ story is that of the second generation of the devastating crack epidemic that tore through Oakland and other cities in the ‘80s. Earlier, her family had lived in comfortable accommodations in East Oakland. Her father was a welder. “We had nice stuff,” she recalled. “But the crack epidemic tore my family apart.” Both parents became addicted; her mother sold drugs. Her uncle’s wife was murdered execution style, because she had stolen drugs. At home, Williams reports that she was verbally and physically abused by her parents, both of whom are now deceased. She became pregnant at 15 and gave birth at 16.

She had started on an odyssey of petty theft, selling drugs, being in relationships with abusive men and addiction.

She was arrested when she was four months pregnant. She realized she wanted to stop selling drugs and make a better life for herself and her children. Her sentence was reduced after she agreed to participate in a drug rehabilitation program. But that was after Williams had her baby in jail, shackled to the delivery table.

“ I was baffled – I was not running nowhere,” she said, recalling that one ankle and one wrist were shackled to the delivery table.  “This was a turning point in my life that humiliated me to the point that I never wanted to go to jail again, but my addiction brought me back for one last time.”  She said she still feels the humiliation of that experience.

Typical of young people trying to turn their lives around, her decision didn’t hold. She had a difficult time finding a job, she was depressed, using drugs again and in another abusive relationship. She was arrested for child neglect after leaving her children at her mother’s house which was judged unfit for children. And she was in possession of drugs at the time of her arrest.

This time, she went into a jail program at Santa Rita to help addicts get clean. Still she wasn’t ready to make her last break with drug abuse, rolling a joint as soon as she got out. “When I got older, I understood how addiction can take you to another place,” Williams said. “Your thinking is all about drugs. Addiction is a powerful disease. I had an emotional addiction- something outside to make me feel better.”

She ended up serving about 12 months for various offenses from drug possession and sales to robbery. During all of this, she somehow managed to get her Certified Nursing Assistant certification and was working in a medical office by day, often selling drugs by night. In her words — “productive by day, destructive by night.”

Finally, Williams rounded the bend. “I hit a spiritual wall. I knew my life had to change.” She returned to school, studying business administration. She became an excellent student, graduated from Merritt College and transferred to UC Berkeley, where she became involved with the Underground Scholar’s Initiative (USI). Her boyfriend, whom she met at a Narcotics Anonymous meeting, told her about USI. The USI program, which calls itself a prison- to- school pipeline, provides academic and other support for students who have been incarcerated.

At first she resisted, saying, “No, I’m going to focus on academics.“ But she started going to the meetings and even tutoring other USI members. “They’re like my extended family. I’ve become opinionated but that’s what they like about me. They say I’m funny. I can be really silly.” Williams is continuing her studies to earn her B.A. in sociology and Spanish in 2018.

She credits USI with providing her with the necessary resources, including networking and assistance in getting into her research program, partly possible through a “Live Your Dreams” Soroptimist Award.

In relating her turbulent past, Williams said that it is part of who she is. “Some people don’t like to embrace their past but I embrace my story. Your past defines who you are today. I probably couldn’t help the people I’m going to help otherwise.” She recalled a mentor who said, “I’m not writing these letters for you but for the people you’re going to help in the future.”

It’s not that she doesn’t have regrets. “I feel like I was ruining my community by selling people drugs when that money could be going to feed their kids.”

Her story of survival, set-backs and eventual lasting change makes her point.