Loyal To His Soil 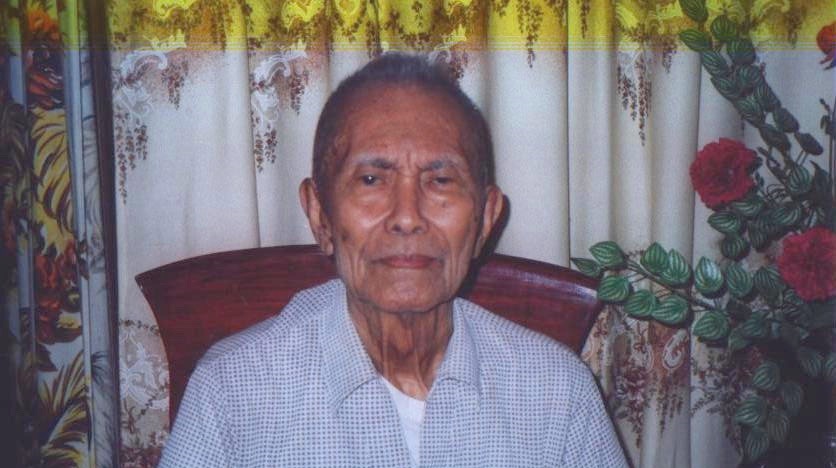 Benito Daquipa, my grandfather, was born in a rocky hollow surrounded by tall hills covered with tall trees. The little hollow near the town of Corella on the island of Bohol in the southern Philippines only had four families.

The eldest of nine children, he lost one of his sisters who died near the start of WWII and another who was killed by retreating Japanese forces towards the end of the war.

His father, Macario, was a landless farmer who could barely feed himself. Macario’s only possession was a loincloth to cover “the most important part of his person,” Benito said. He characterized his father as a wise, brave, and law-abiding man who was a good storyteller.

Growing up in a bamboo hut with a cogon grass roof, Benito worked on the family farm all day every day, and then would weave nito hats in the evenings. The small farm provided enough food for the family, and the hats brought in the family’s only income with which they paid the rent for their farm.

Like his mother, Anacleta, Benito learned how to read through prayer books. He started school at age nine, and was teased for being a skinny farmer from a remote area. While being bullied one day in third grade, he fought back and gave a bigger kid from a wealthier family a black eye, and the teasing stopped. He also excelled in school, always with a chip on his shoulder because of his poor upbringing.

In elementary school, he traded corn from his family farm in exchange for texbooks. He finished elementary school at the top of his class, and gave his valedictory address in shoes, socks and a tie borrowed from a neighbor. Despite how competitive high school was, he was able to borrow books from his classmates, and after graduating in 1930, he became a teacher.

His first assignment was near his hometown, and despite constant recruitment to relocate elsewhere, he worked in or near Corella for the next 19 years. Although his family couldn’t afford college, he saved up his own salary and attended classes in far off Manila during the summers.

In 1935, he married Nicolasa Salang, another teacher from Corella, and stopped attending college. Their first son, Desiderio, was born a year later, followed by Antonio, my dad, in 1940.

The Japanese invaded in 1941, and all schools were closed for the duration of the war. Benito was recruited into the resistance, and he and several others built huts in the nearby mountains where they could hide out. When U.S. forces began landing in Bohol at the end of 1944, he was part of a group of guerrillas who reintegrated into their hometowns to spy on occupation forces.

When the Japanese left Bohol, he was recruited to join the military as an officer, but he chose to help rebuild his hometown as a teacher.

After WWII, the University of Bohol opened, and he attended classes there at night. Five days a week, after a full day of teaching,  he had to walk eight kilometers to his classes and then back.

In 1946, Benito and Nicolasa had a third son whom they named Gregorio.

Benito finished college in 1948, and was assigned as a principal in a town on the northern coast of the island. A typhoon wiped out the school two months into the year, but he was able to mobilize residents to help rebuild it.

The couple’s only daughter, Josephine, was born in 1952.

Six years later, Benito got transferred back to Corella, his dream job. As principal, he worked with his teachers and the mayor to improve his hometown with infrastructure projects –  planting fruit trees, carving out paths up the hills and even building a permanent classroom atop “Lover’s Hill,” complete with a rainwater catchment system that fed a nursery on the side of the hill.

In 1960, Benito became a District Supervisor overseeing several schools, a position he held until 1972. He earned a reputation of putting the needs of students above the desires of politicians.

In 1964, Nicolasa died of cerebral thrombosis. A month later, Gregorio started having heart problems while at Seminary school in Manila. Ordained a priest by Pope Paul VI in 1970, Gregorio returned home to Bohol, where, in 1976, he died of a heart attack after playing basketball.

On two different occasions in his retirement, the man who had devoted his life to serving his hometown came to the U.S. to help his son, Antonio, raise his three children. That’s how I learned about my grandfather’s remarkable story. But he never lasted more than a year before returning to Corella to spend his golden years in the much simpler tropical paradise that he had helped educate for four decades.