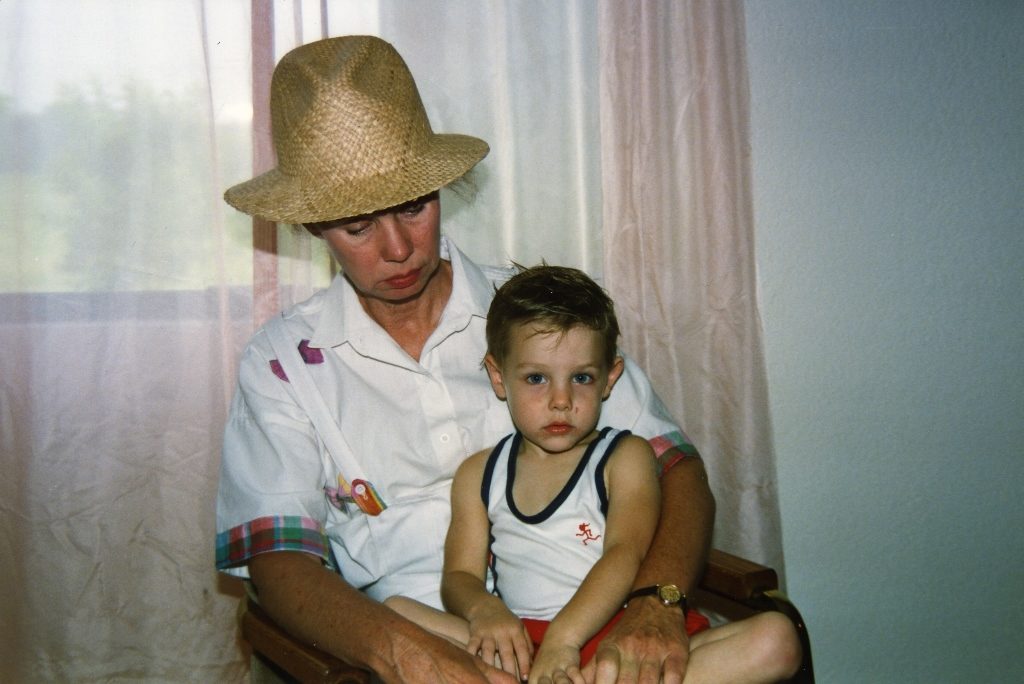 My grandmother and me

I didn’t grow up here. I’m from Illinois, from a town around St. Louis you’ve never heard of. But my dad was born in Hollywood, and I always wanted to know why. Years ago, when I’d ask, he’d just say he didn’t know. But I got the sense that he didn’t want to talk about it. My family has a lot of things they hide, and I feel like I’ve never gotten the full picture of anyone’s life.

I decided to ask my grandma, who, I’ve realized as I’ve gotten older, I know relatively little about. What I do know is that the life she had when she was younger and the one she’s had since I was born are like the stories of two separate people: she’d been married to men who were not good. She and my dad and aunts were dragged around the country by her first husband and one of her daughters died, when she was 16, in a car accident.

My grandma says she came out to Los Angeles in 1962 from St. Louis where she’d lived her whole life. While she was in St. Louis, she met a man named Al (my grandfather), who was older and had been in the Navy during World War II. At the time she met him, she was living under the roof of her father, a controlling man who abused his wife and children. For her, marrying Al was a way of assuming a surrogate father figure and an escape from a miserable home life.

“Everyone makes big mistakes,” she says about her decision to marry him.

Going out to California in the first place was, in her words, “one of Al’s harebrained ideas to make it big somewhere without working for it.” Since they were married and had two children, my grandma had little choice but to go along. Not long after they moved to L.A., they had their third child–my dad. By my grandma’s estimation, they moved between 40 and 50 times during the years they were together. Ostensibly, Al was a house painter and could find work anywhere. But by her account, he mostly stayed gone and made a living any way he could get away with.

According to my grandma, Al was simply the kind of man who was never happy in one place. My dad had a different take on it. He says that the family came out to California because Al was running from the law.

“He was in trouble is why they came out there,” my dad said. “He was always running from the cops. He was a safecracker in St. Louis, but he got in trouble. He was always wanting to get over on someone. He’d steal, cheat you. Petty shit. Couldn’t trust him.”

Al’s original last name was Lowry, but he changed it before he met my grandma.

“The name he used was Albert Lawrence Mann,” my dad said. The initials, A.L.M., are an anagram for lam, because, as my dad says, he was always running from the law. “He actually dyed his hair before they went to California, as a disguise. But it turned a funny green color.” My grandma was horrified.

Between what my grandma describes and what my dad has told me about their lives then, it’s difficult to know what to believe. If I go only by what she says, I’d have to believe that my dad adds sensational details of his own invention to every story he tells about them. If I just listen to him, it means everything she says is downplayed to the point of not being the full story. Perhaps part of me wants to believe my dad more, for the same reason that so many people-in the Midwest, at least–claim to be related to Jesse James: deep down, many of us have an affinity for outlaws.  As with most things, the truth, I assume, lies somewhere in between my dad and grandma’s stories.

After a few years in California, with her taking care of three kids and Al never being around, my grandma became fed up and moved back to St. Louis to get away from him. He followed her, and convinced her to move to Baton Rouge with him.

This is another place where the stories diverge. She says she left him, but according to my dad, they drove to Louisiana in a car Al had stolen by going to a used car lot, asking for a test drive, loading the family up, and driving off.

“So we had a new car when we left California, but he didn’t pay for it,” Dad said.

I haven’t confirmed this with her. I get the feeling she’d deny that version of the story either way.

Al is technically my grandfather, but I have trouble calling him that. He wasn’t around much when my grandma was raising her three kids, and I saw even less of him. I have just a handful of memories of Al. The first is one of the earliest things I remember–me sitting in his lap in the sunny kitchen of the house my parents and I lived in. I am eating cereal with pieces of banana in it for breakfast. The other memory is of him explaining to me what it means to die, in that same kitchen. I hadn’t known about death before that, and it terrified me.

In 1977, 10 years before I was born, my aunt Michelle was killed in a car accident when she was 16. After not seeing him for years, my dad says Al showed up at the funeral. My dad didn’t see him again until almost 10 years later, right before I was born.

I spent my childhood not knowing any of these things, so it’s hard for me to square the life my grandma lived when she was younger with how I remember her growing up: buying school clothes every year for my sister and I, taking us up to stay with her in Indiana for weeks in the summer, cosigning my student loans in college when I thought I was going to get kicked out of school because I didn’t have the money to be there in the first place. Her stability and support have propped up me and my sister in ways I wonder if I will ever fully appreciate.