It’s pouring rain in downtown Oakland. Nevertheless, about 100 people have gathered in the lobby of the building that houses the Alameda County Board of Supervisors. People of color and white people. People from the very young to the old. People of all faiths and no faith.

They are with the Stop Urban Shield Coalition (http://stopurbanshield.org/) and have gathered to demand that the Alameda County supervisors reject a proposal to request about $5 million for an Urban Areas Security Initiative (UASI) grant for training and war games exercises that emphasize the militarization of law enforcement; this grant is funded through the Department of Homeland Security.

“We are here to fight against military policing. We need to end Urban Shield or, minimally, delay the vote until the supervisors have met with us. We demand that local officials defund this program and fund programs for the community,” announces Mohamed Shehk, with Critical Resistance, to applause. 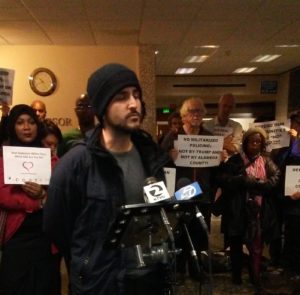 This message is echoed by other speakers. “End the war against the people. Re-prioritize the county’s budget. Demilitarize policing. Invest in affordable housing,” the Rev. Cherrie Murphy urges of county supervisors. 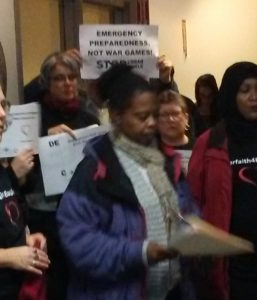 Although Urban Shield claims that it supports fire, EMS, public health, and emergency management, in addition to law enforcement, it is primarily law enforcement that is the focus of UASI training. Of the seven seminars offered at the 2016 Urban Shield Expo in September 2016, five focused on terrorism (http://ustraining.acso.net/).

The Alameda County Urban Shield website states that a catastrophic earthquake is the most likely event to cause damage to the Bay Area. Despite this, the website is filled with images of armaments and heavily-armed law enforcement.

Stop Urban Shield activists move upstairs for the supervisors’ meeting. However, they have to wait for almost 90 minutes for Urban Shield to come up for discussion and many activists have to leave before they have an opportunity to speak.

Alameda County Sheriff, Gregory Ahern, is the first speaker and he talks non-stop for almost one hour, usually reading short sections from very dense projected slides that are very difficult to read and/or absorb. 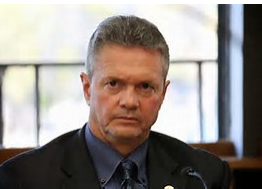 He defends the Urban Shield program and has two main messages: We do a fantastic job and Disaster is looming.

“It’s just fear-mongering,” says a young woman who is sitting near me. 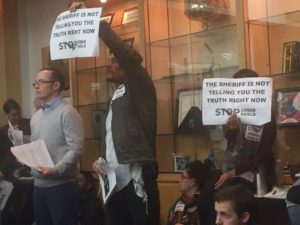 Eventually, the time for public comments begins. Each speaker has one minute. The chairperson, Supervisor Scott Haggerty, declines a request for speakers to cede their time, thus preventing opponents of Urban Shield to present a focused and detailed presentation.

Up first are fire department and EMS employees from around the Bay Area, who all support Urban Shield. 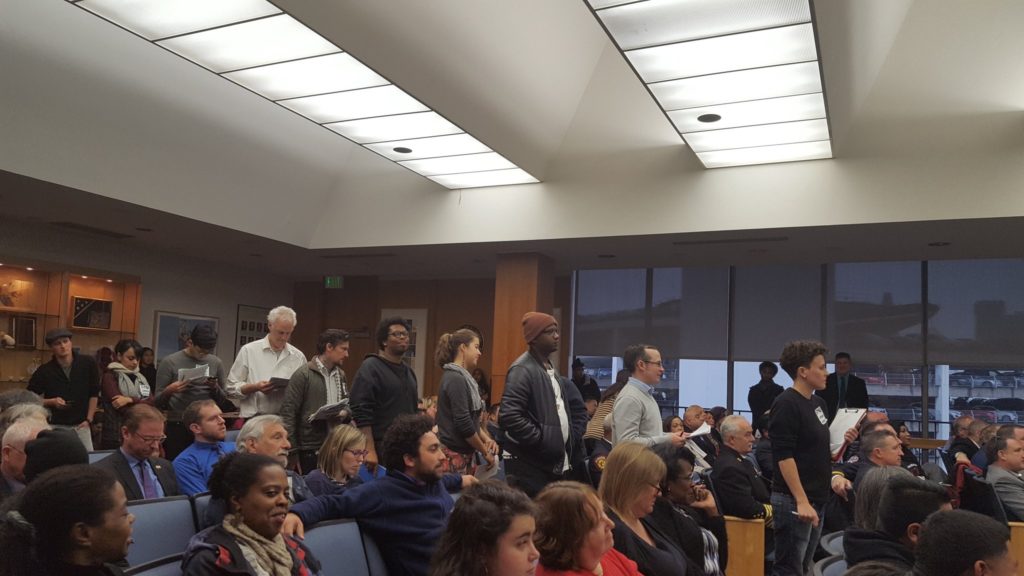 Many Stop Urban Shield activists comment that they support the training of emergency response teams, but are opposed to the militarized training of police.

A major concern for Stop Urban Shield activists is this militarization of law enforcement and the lack of attention to building community resilience.

“An FBI study of 160 active shooter incidents found that most of them ended within five minutes, before law enforcement arrived. In dozens of these incidents, ordinary people intervened and stopped the attack, a capacity we need to grow,” says John Lindsay-Poland, of AFSC. 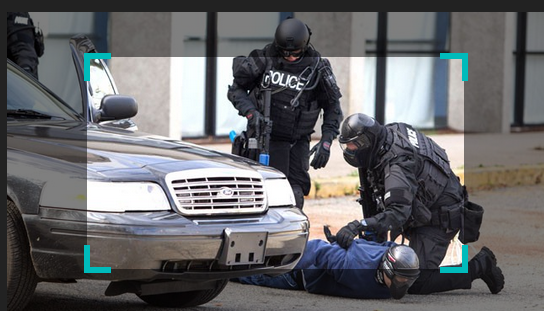 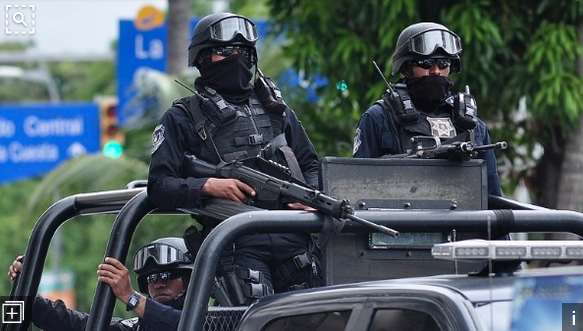 This leads later to a conversation among the supervisors, who claim to know nothing about the involvement of foreign forces. “I invited them. I didn’t know they are offensive,” comments Sheriff Ahern in response to supervisors’ questions. It is hard to imagine that a person in his position has not read or paid attention to the many news stories about the abuses of the Mexican Federal Police.

What is very noticeable is that almost all the people who speak in support of Urban Shield are white men, most wearing gold-braided uniforms, and they are present on work time. In contrast, the people speaking against Urban Shield range in age from their teens to their 80s, come from very diverse backgrounds, and almost all are present on their own time. What is also very noticeable is that supporters of Urban Shield have had much more time to speak than those who oppose it.

At the end of public comments, the supervisors begin their discussion. “There needs to be more investigation into the issues. I understand the concerns about the militarization of the police,” says Supervisor Keith Carson. He suggests creating a task force to investigate the issues raised.

“How prescriptive is the Department of Homeland Security?” asks Supervisor Wilma Chan, “I wouldn’t like to lose control over how the money is used.” Sheriff Ahern’s response is very vague: “There are guidelines and criteria.”

“Would you be willing to not invite countries with human rights violations’ issues?” continues Chan. “Yes,” replies Ahern.

Chan looks out at the Stop Urban Shield supporters. “You’ve had more impact on us than you may know,” she says. Nevertheless, the supervisors go on to vote unanimously in support of the UASI/Urban Shield proposal. However, the motion includes amendments to: a) exclude countries complicit in human rights abuses, and b) establish a task force.

“It was a small victory,” says Lara Kiswani of the Arab Resource and Organizing Center (AROC) as Stop Urban Shield activists leave the chamber. “We shook things up. We got some important perspectives on the table. But we still have a lot of work to do.” 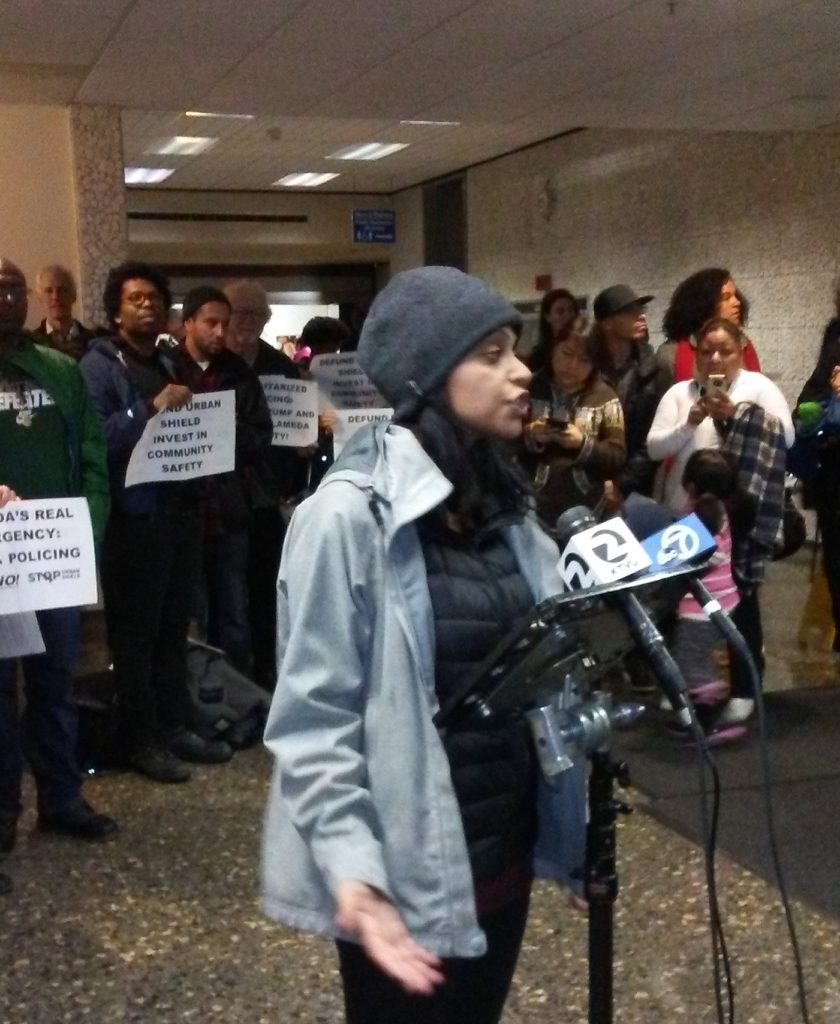