Gone are the days of waiting patiently for the next Pacific Islander family event, Pacific Islander festival or outdoor Reggae concert to enjoy Polynesian comfort food at its finest. Mo’s Hut opened its doors in the Fruitvale District, a neighborhood already well recognized among Bay Area foodie circles and beyond for its Latin American cuisine.

Nestled between a barber shop and a convenience store on a busy stretch of Fruitvale Avenue, Mo’s Hut relies on its Pasefika roots and urban swag to serve authentic Polynesian goodness to all who come through its doors. Its location is ideal because one third of Alameda County’s Pasefika population reside in East Oakland.  The initial idea was to be a take-out only restaurant, but the Moliga family is learning fast that this community needs a place to eat together as family.  On weekends, from opening to closing,  it’s standing room only in Mo’s Hut.

Long before the restaurant opened, restauranteur Pupuali’i U. Moliga made the journey to the island of Oahu from the village of Tula in American Samoa to help support his older brother while he attended the University of Hawai’i. In the true Fa’a Samoa fashion, his older brother attended classes full time while the younger Moliga went to work in heavy equipment and construction and supported them both. And in the true aloha spirit, it was on the shores of Waikiki where he met his bold and sweet wife Kitty Afuvai.

For many Pacific Islanders, Hawai’i is the place where they land before making the trek stateside and when the opportunity arose, Kitty, who worked for insurance giant AIG, accepted a position in the Bay Area which transferred her and the family to the continental US. On arriving from Hawai’i, the family started their lives in the states in the Sobrante Park neighborhood in East Oakland.

The Moligas started in the food industry more than 20 years ago by catering for church activities and family events.

“My husband has always wanted to help out his Polynesian community. He wanted to help our relatives save a little from going to hotels and paying for food we don’t eat,” Kitty said. “There were so many events – weddings, funerals, birthday’s, flag days. And not just here, in L.A., Missouri, Seattle and Utah.”

Moliga’s culinary chops strengthened by word of mouth within the Polynesian community. He would expand operations to becoming a food vendor at various Pacific Islands and Reggae Music festivals up and down the West Coast and Utah, thus cultivating an almost cult like following among festival goers as well as increasing his non-Polynesian base of customers.

“We try to make our food so that not only Polynesians will eat it,” Kitty said. Their cuisine has reached the palates of people from across the globe. Mo’s Hut provided meals non-stop for 48 hours during the Urban Shield tactical first responders training on the old Bay Bridge in 2013 which hosted teams from across the globe. 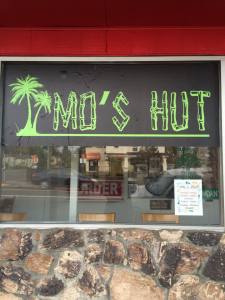 With Mo’s Hut cuisine in high demand, the family faced a major decision whether to keep the business as is was or  bring it to the next level. After a reflective trip back to Samoa, they decided that Moliga would retire from his day job as a shuttle bus driver at Facebook and open up the restaurant.

“After every catering event, after every festival, our customers kept calling asking us, ‘Where’s your restaurant?’ So we opened the restaurant for our customers and it’s our way of serving our Polynesian community,”  Moliga said.

Bay Area native and Hawaiian Slack key guitar great Patrick Landeza was amongst the patrons when I came to interview the Moligas. “This is Polynesia at its finest,” Landeza said. “The Mo’s Special is really good. People should give it a try because it’s not really as unique to Oakland as you would want to think. And the Hawaiian BBQ plates are delicious. This is the real deal!”

Landeza isn’t the only Pacific Islands musician to think so. The restaurant’s list of musical fans include, Fiji, JBoog and Drew Deezy , who all have substantial followings of fans in Northern California, as well as BigbodyCisco of BigbodyRadio.

During the week, the menu is simple. They offer two types of plates in three sizes ranging in price from $5.50-$12. + tax. The Hawaiian BBQ Plate is the standard fare; one can choose from well- marinated teriyaki chicken, thinly sliced beef and short ribs with a scoop of potato, mac ‘n crab salad and steamed rice.

But as Landeza mentioned, it’s the Mo’s Special that makes this restaurant stand out from the typical Hawaiian BBQ restaurant. In Polynesian cuisine, as in most indigenous cuisines from across Oceania, the almighty coconut reigns supreme. The Mo’s Special starts off with a base of fa’alifu fa’i – green banana cooked in a savory milk coconut sauce, with povi masima [Samoan]/pulu masima [Tongan] – cured and brined corned beef brisket with cabbage, BBQ Samoan style teriyaki chicken and sapasui pisupo – mung bean vermicelli stir fried with mixed vegetable and bits of canned corn beef.

During the weekend, they have a surprise menu that changes weekly depending on the availability of ingredients. It’s this menu that keeps Saturday standing room only. Seafood and baked goods  shine on the weekend menu.

Oka in Samoan or Ota in Tongan is a staple on the weekends. This tuna dish is served raw in coconut milk accompanied by fresh veggies and a hint of citrus. I’a tugupa’u, is a whole bbq’d tilapia.

“In Samoan culture we don’t get rid of the head and tail, we must serve it whole,” said Kitty with reverence to recipes that have been passed down for generations.

Other dishes that have been featured on their ‘secret’ weekend menu are Lu Pulu – corned beef wrapped in taro leaf and cooked in a savory coconut milk sauce, palusami – taro leaf stewed with coconut milk and other more well-known Hawaiian favorites like Charsiu pork/chicken, kalua pig and lau lau.

Customers walk into Mo’s Hut  in search of comfort food that is reminiscent of blue waters and warm tropical breezes. It’s a family affair here with all of the workers belonging to the Moliga or Afuvai bloodlines and Polynesian hospitality in abundant supply. If time permits, the Moliga’s and their staff are always available to talk about Samoan culture and their dishes to those unfamiliar with Polynesian cuisine.

So what’s the Moliga’s secret ingredient that keeps Polynesians and the rest entering their doors in droves? Kitty exclaims, “LOVE! A WHOLE LOTTA LOVE. If there’s no love in the food, it’s not going to come out.”

Tiffany Rose Naputi Lacsado was born on the island on Guahan (Guam) to a native Chamorrita and a Filipino contract laborer from Bohol, Philippines. As a child her family island hopped from Guahan to Hawai’i before settling and spending her most formative years in deep east Oakland, California. She is an alumni of Castlemont High School and has spent over a decade earning her bread and butter working in HIV/AIDS prevention and sexual and reproductive health promotion for LGBTQ youth and young adults. She is the founding member of One Love Oceania, an indigenous Pan-Pacific Islander Women's performance group and mother to Buhay age 2 and Shola - coming soon in October 2014. In the fall she will complete the University of San Diego Lactation Educator Counselor certificate program.