Jingletown is a small neighborhood in East Oakland adjacent to Alameda, next to the 880 Highway near the Fruitvale BART station. 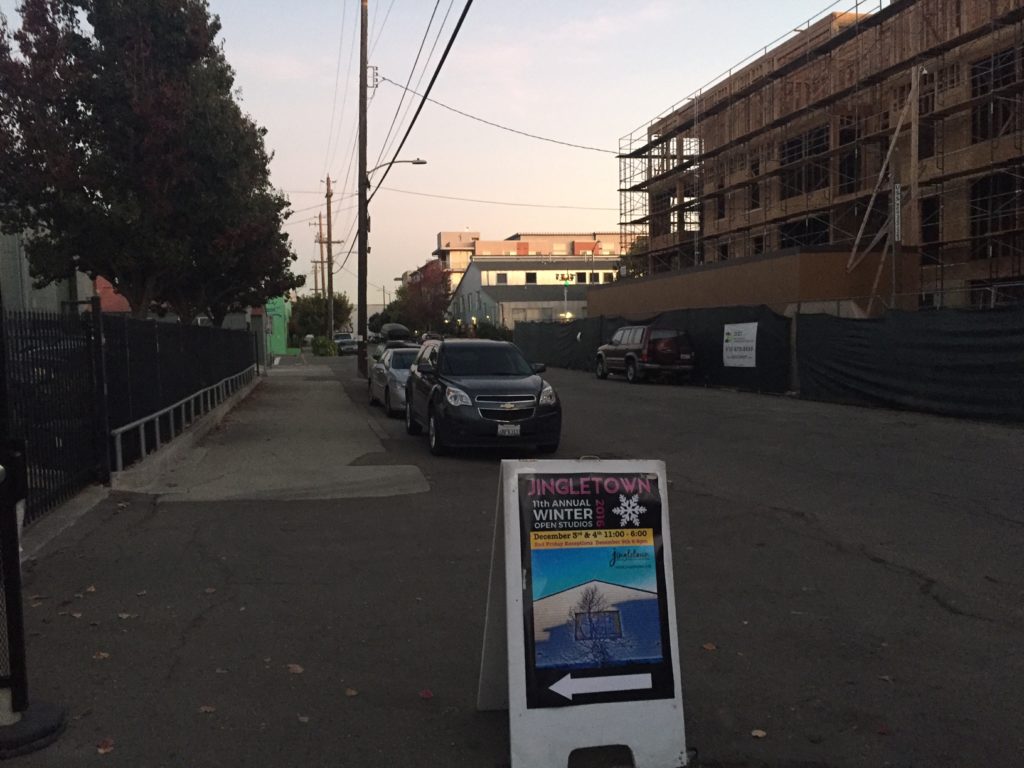 Local lore tells us this was once a working class, Portuguese neighborhood where people got paid in coins and you’d hear their pockets jingling down the streets on pay-day.

Jingletown has changed, as all of Oakland has, and now has condos, a coffee shop and a bar. However, many old families do still have their same homes.

Jingletown is a small neighborhood in East Oakland adjacent to Alameda, next to the 880 Highway near the Fruitvale BART station.I used to drive through Jingletown on my way home from work when I lived in SF and always had a hankering to live there. It reminded me of Fight Club. Industrial, gritty yet homey all the same. 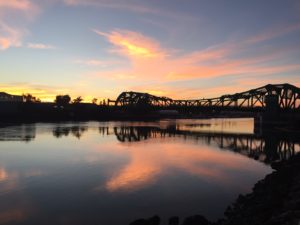 The neighborhood snuggles up along an estuary that’s home to the largest system of draw bridges in California, where you can see the UC Berkeley rowing team skim along the water. Pelicans glide over the water in search of fish. Peregrine falcons nest atop the Fruitvale bridge tower. 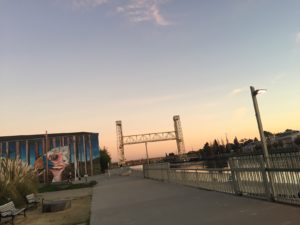 My dogs and I once spotted a lone seal playing in the water. In March, the Oakland Museum Women’s Board puts on the White Elephant sale, which is a giant, indoor flea market, in Jingletown. Proceeds benefit the Oakland Museum. 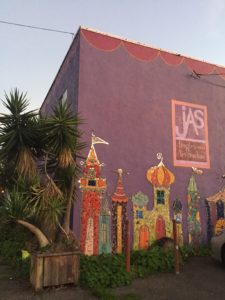 For a long time, the Institute of Mosaic Art held classes here. Their building still stands and mosaic art peppers the whole neighborhood, as do murals. 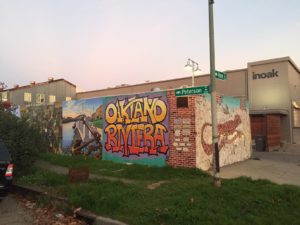 Railroad tracks bisect the neighborhood and snake between large warehouses that hold cargo from the nearby port. In the dead of night, the Con Agra train’s metal wheels screech along the rails as the train cars slide impossibly close to the parked automobiles along the street. The next morning, excess grain lines the tracks.

Condoms, broken glass and syringes litter the streets. Jingletown has something for everyone and is home to artists, lawyers, houseless people that camp out along the water, folks of color, and others. Almost everyone has a dog, or three. 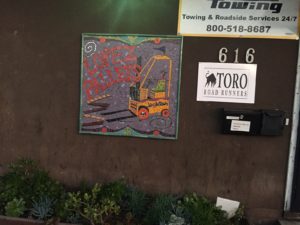 I walk my two large dogs daily. One day along our route, we were stopped by a blonde woman with a European accent in a luxury car. She beckoned me over and I hesitated. “Excuse me, do you like living here?” she asked, “This reminds me of my favorite neighborhood back home, we call it ‘shit town,’” she gushed, not particularly offensively. I politely answered her questions and went along my way. 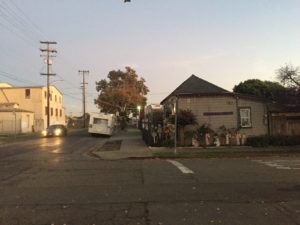 Shit town, indeed. I often wonder how toxic the environment truly is, being surrounded by a major highway and water way. I monitor my dogs for unusual growths or symptoms. I wonder about the health of the houseless people that I’ve come to know through my dogs.

My ultra conservative and buttoned up brother came to visit me a year ago and I prepared him for a scene that is the polar opposite of his clean, homogenous, suburban town near Denver.

“There’s graffiti, trash and all kinds of people,” I warned. “We’ll probably see my street friend that does some kind of medical procedure to himself behind the bushes where I walk the dogs. Try not to clutch your pearls.” 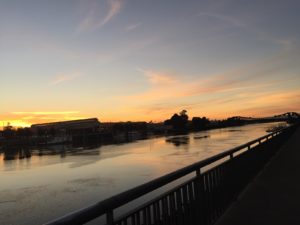 One day, as my partner and I walked our dogs along a side street, we spotted an older Black man in a velour jumpsuit and a Kangol on his head, holding a beverage in a can as he strutted toward us with a prideful ease. “That’s a nice dog,” he commented, pointing to my 85- pound, grey and white pit bull.

He proceeded to tell us he was from Chicago, which is the home of “real” gangsters and that the boys out here in Oakland are just playing. We talked about love, partnerships and God. His speech came easy and fluid despite being noticeably drunk.

Half of his face was either burned or had been hurt in some kind of way. He had kind eyes and a whispery, soft voice like Slick Rick. He pointed an unsteady finger toward me, “You love her more than you love yaself?” he asked my partner. “No,” my partner replied, without hesitation. We all had a good laugh and parted ways.

Part of me wanted to give this man my card, so he can get his face looked at where I work (a health clinic.) But I felt it wasn’t my place. I still think about him and hope I see him again.

As we headed home I asked my partner, “What if that guy was God?” He put his arm around me and held me close as we made our way back to our fancy condo building. “Yeah, maybe,” he said.