What Would You Do?

(On the 2nd weekend in October, labor activists, military veterans, musicians, artists, and people of faith from across the US converged on both sides of the US-Mexico border at Nogales, AZ. The action was sponsored by School of the Americas Watch (SOAW) to draw attention to the “war on drugs’” and trade policies that drive migrants from their homelands only to find an increasingly militarized, dangerous and often deadly crossing).

The prison bar-like wall cast a long shadow over the 1,000 or so activists who gathered on both sides of the border at Nogales on the second weekend of October. Speakers addressed the crowd from a stage on both sides of the metal barrier. From the Mexican side, an indigenous dancer burned sage to the four winds, mirroring the directions from which the crowd had come.

Hip hop artists from New York City, Catholic nuns from Chicago, and a multigenerational delegation of 20 activists from the East Bay joined with Mexicans and other migrants from Central America whose families are literally divided by the 30- foot high fence.

This is a showpiece section, about one-third completed, of the  border wall which President-Elect Trump plans to extend across the full length of the nearly 2,000 -mile long Mexican border and have Mexico pay for it. Mexican families — along with increasing numbers of migrants fleeing violence across Central America and their U.S. supporters — argue they have already paid the price with family separation, increasing criminal penalties, and all too frequently, death along the 50- mile path through the unforgiving Sonoran desert.

Standing below the wall, Oakland resident Javier De Paz, a doctoral student in educational administration at Mills College, reflected on how being at the border traces his life’s path. 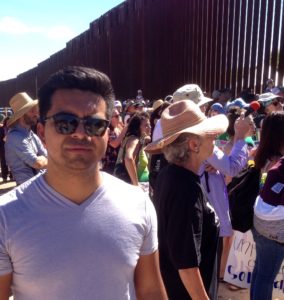 “The military, immigration, refugees … my own personal story resonates here even though it’s my first time here,” he said. “I was born and raised at the height of civil war in El Salvador. I lost 36 of my family members to the war. My dad came to this country as a refugee. I reunited with him 10 years ago to further my education.”

De Paz plans to build upon the work of his father, Tulio Serano, who founded CRECE (Central American Refugee Committee) to support East Bay refugees and the communities they left behind.

Before NAFTA, migrants rarely died crossing the border, explained Attorney Isabel Garcia of Tucson-based Derechos Humanos at a workshop later that day. Movement back and forth was fluid.

“Migrants came for the growing season and returned home afterwards,” she said. “Some 3,000 migrants have died crossing the desert since 2000, 25 in September alone. It’s part of a migrant death by policy.”

With the crackdown at the border, “human rights have essentially been thrown under the bus,” added Catherine Tactaquin, executive director of Oakland’s National Network for Immigrant & Refugee Rights (www.nnirr.org).

Back at NNIRR’s Oakland office several weeks later, Tactaquin explained further:  “To the rest of the country, the border is out of sight, out of mind. The conditions at the border are a different reality. The enhanced militarization, the proliferation of checkpoints and surveillance technology, have created an enforcement economy which has taken over the entire region. The historically large Mexican and indigenous are subject to racial profiling, the use of deadly force, and abuse by the border patrol,” Tactaquin said.

News stories report that with heightened enforcement, detainees — more and more women, children, and often families fleeing violence from Central America — are subject to criminal penalties in fast track prosecutions that result in prison sentences. Initial illegal entry offenses are misdemeanors which carry up to six months in jail; a re-entry conviction earns a felony and up to two years in prison.

Transactional Records Access Clearinghouse at Syracuse University (TRAC) found that
over the past 10 years, illegal entry prosecutions are up 182 percent and illegal re-entry charges have increased by 88 percent. Additionally, illegal entry and re-entry cases comprise nearly half of all federal prosecutions, according to a recent report by Justice Strategies and Grassroots Leadership (http://www.justicestrategies.org/sites/default/files/publications/indefensible_book_web.pdf).

Tactaquin believes the widespread demonstrations following the election of Trump signal a desire to build community and alliances of mutual support. “They’re wake up calls to dig in and do the deeper thinking for serious organizing toward political goals against the more difficult Trump agenda,” she said.

In the short term, that means protecting vulnerable individuals and communities at the local and state level by informing them of their legal rights, particularly the so-called “dreamers,” or DACA (Deferred Action for Childhood Arrivals) recipients who were granted temporary legal status under President Barack Obama’s 2012 executive order.

“What would you do,” Tactaquin asked, “if you were a parent, living in poverty, unable to find work, living in a repressive country? Wouldn’t you do everything to protect your family to give your children a chance to survive? Would you not cross a border? We need to see ourselves as part of a global movement, supporting job creation and living wages. Migration should be a choice, not something forced upon people. Most people don’t want to leave their homelands.”

Or, as De Paz said at the Nogales border wall nearly two months ago: “Trade policies have wrecked local economies. People are persecuted and have been displaced by drug wars. They are desperate.”