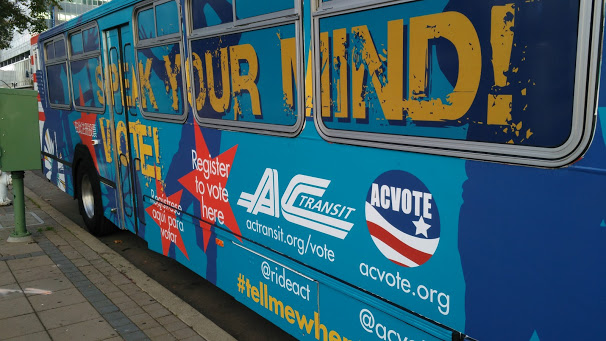 The Oakland Voices 2016 correspondents had gathered in the East Bay Times newsroom before heading out to cover our local races, two city council races and three measures – strengthening protections for renters, establishing an citizens’ police review commission and instituting a tax on soda.

However, the excitement of covering their first election as community correspondents was having to compete with the growing nervousness about the returns from the presidential election. The numbers for Hillary Clinton were not coming in as everyone had expected.

“At least you guys will have a diversion,” I joked.

They set out to the various campaign celebrations and talked to candidates and supporters about the important issues facing Oakland. The disbelief about what was happening nationally was a palpable sentiment at each event, but  many of the correspondents reported that witnessing the community spirit, unity and dedication to social justice in their hometown was a welcome counter narrative.

See the stories they came back with, above.

Brenda Payton has been a journalist for 40 years. She was a columnist at the Oakland Tribune
for 26 years. She contributed to KQED radio’s Perspective series for 20 years. She was a co
-producer of
“Your Loan Is Denied,” a documentary about lending discrimination that aired on PBS’ Frontline. She
was a reporter at the San Francisco Examiner, the Boston Phoenix and the New Bedford Standard Times. She was a lecturer at San Francisco State University, teaching newswriting, reporting and feature writing.