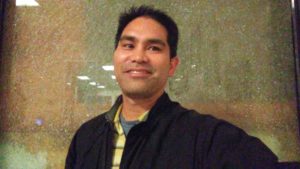 Me infront of a window at the East Bay Times, shattered during election protests

These three strong, black, female community organizers, who were part of the Oakland Justice Coalition (OJC) slate, were also having a shared watch-party together.

Before deploying to our respective assignments, all of the Oakland Voices community correspondents reported to the “newsroom” to check in with our editors and eat some pizza. While it was exciting to be around the other correspondents before our first assignment, the presidential election results streaming on the televisions had everyone nervous.

Later in the evening, while Fife and the three candidates were giving upbeat speeches about sacrificing and giving their best and vowing to carry the fight on beyond the election, there were jokes and hearty laughter. The overall vibe was both familial and celebratory. Mind you, these were three candidates who ran against powerful incumbents and they were all projected to lose.

In spite of those projections, the watch -party was indeed a party where people were having fun in an intimate setting. The juxtaposition of the depressing images from Clinton campaign headquarters being shown on the television screens to the party atmosphere that permeated the entire room only validated all of the life choices that I had made, ending up in that exact place at that exact moment in history. While the rest of the nation was lamenting a one- point loss, we were celebrating double – digit losses.

In a room full of veteran community activists, the watch- party was a celebration of hope for the future, the kind of hope that can only come from working hard on the ground every day, speaking truth to power, empowering one person at a time, building bridges, organizing, and struggling to create a better world. It is the confidence that comes from being woke and being surrounded by woke people who confirm the crazy notion that together, collectively, we can improve our own situation.

In contrast, my next stop for the evening was at my local watering hole where everyone was understandably depressed. There were no feelings of optimism whatsoever. People were physically slumped over their drinks, staring blankly at the television. These people were not community organizers and are not actively engaged in struggling against the system; they felt completely powerless on election night. Worse yet, many felt betrayed by a nation that they suddenlyy didn’t recognize and couldn’t relate with.

But losing isn’t the end of the world. Losing is an opportunity to learn and grow. Oppressed people know this all too well.

As a nation, we are Trump, and we have to come to terms with that. However, as a city, Oakland is the polar opposite of everything that Trump stands for, and that was on full display at the election night watch -party for the campaigns of Nehanda Imara, Noni Session, and Kharyshi Wiginton.