Going from one place to another is a basic necessity that we all have to deal with everyday in our urban lives. We can either ride a bicycle, purchase a vehicle or use public transportation. Public transportation, like the bus, BART or Uber, help people without cars travel to far away places.

Taking the bus might take longer  because of the many stops  en route and traffic. The city of Oakland is currently working on the new Bus Rapid Transit (BRT) project, which is supposed to be in full operation in 2017. The plan is to have dedicated lanes (that only buses and emergency vehicles can use), new vehicles, frequent service and new communication systems that will control the street signs and make the bus schedule more accurate. 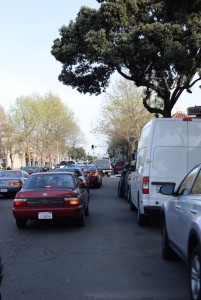 But what how can this happen on an already congested street? The plan, according to the city council, is to do the construction by sections every eight weeks and to eliminate parking areas along International boulevard.

At first it seemed OK. The traffic was flowing nice and steady – until I got to the 20s. Then the street became really narrow, there were only two lanes for each direction along International Boulevard and traffic started to slow.

It went like this for a while until I got to the 50s or so.

It got me to thinking – how is this going to be possible? Is the new BRT going to affect the sidewalks as well? Is it really going to work? Are drivers really going to stay in their designated lane? And what about the bicycle lanes? I had very limited space for most of my bike ride as it was.

I also saw some construction being done on the road, but it seemed to me they were just patching up the holes on the road and nothing else. It is already the end of March and the streets are very much the same.

I decided to take the bus back to my house. I took the 1R to experience the ride; luckily for me it wasn’t rush hour. I had never taken the 1R; I usually just ride my bike everywhere. The bus I got on was a really long, worm-like bus; it was very spacious and it was actually clean.

It was an enjoyable ride, but I wasn’t in a rush so I don’t know if this bus line is a reliable source of transportation.

One other thing that got my attention was the fare. The fare was $2.10, which to me as a low-income resident seems too costly. Will the bus fares go up as well since there is a $170 million investment in the construction of this new Bus Rapid Transit?

A lot of people believe that the bus really needs its own lane to avoid accidents and support public transportation. Something should be done. Let’s just hope that our city council chose the best option for our city.