The aroma of KFC, nail polish and bus exhaust contend for a space and all settle inside my nostrils. This is 73rd and International Blvd. With its never ending red traffic lights, the 1R whizzing by carrying working people, school children and those just along for the ride. On this corner, it seems as if everyone is either lighting up a cigarette or putting one out, leaving the evidence on the sidewalk in the form of cigarette buts. 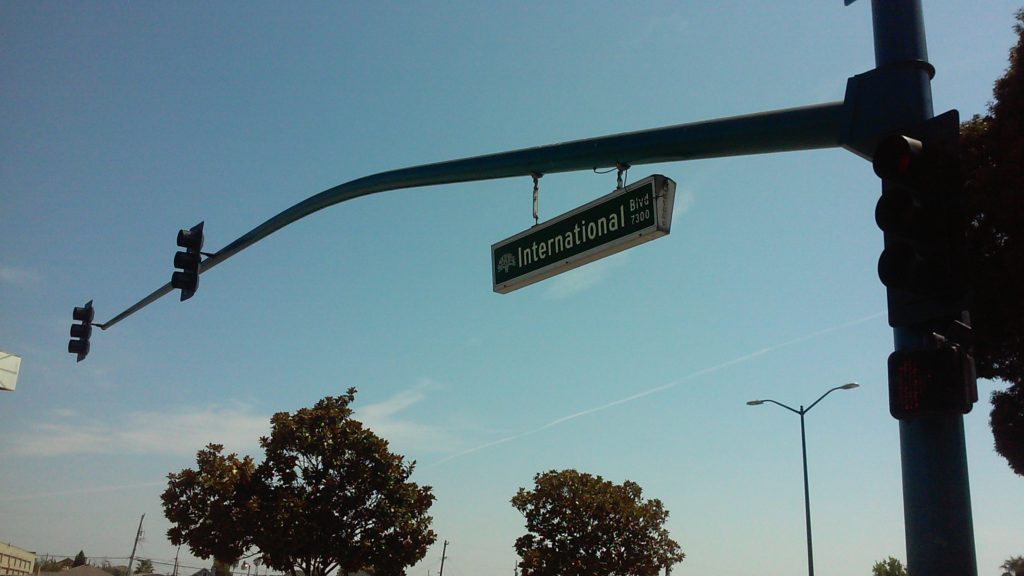 This is a busy part of town. There are countless nails shops, liquor stores, chicken eateries, produce shops, bus depots, as well as a homeless shelter and a Faith and Deliverance Center, which I’m sure is a church, on the corner where most of the people from the shelter congregate.
`
Plenty of times I have been on the bus or driving in my car, or simply walking fast and never took the time to look around. This particular day, after walking for a while I decided to stop for a break and was approached by a woman who asked about the words on my shirt: “Black Womyn’s Lives Matter, Free Marissa Alexander Now.”

Interested in knowing more about my shirt, and the woman on it, we talked for about a half an hour. Alexander is the young African- American woman received a 20-year sentence for firing a warning shot during an argument with her abusive husband. After public protest, she was released.)

My new friend pointed out some of the street’s main attractions. She started with a nearly dried- up creek with brownish green water that had a pungent odor and a small sinkhole. We threw out ideas about where it came from but still remained puzzled.

She also took the time to point out all the problems in and on the street like a loud altercation between a man and his girlfriend about money, which according to my new friend, was a common occurrence.

We then looked at the rough uneven pavements and crosswalks with no stop signs down International Blvd.:  I explained that as a driver, it’s very unsafe to drive at night.

Afterwards, she introduced me to a few friends, one of them was selling jewelry she had made.

The longer I stayed there, the brighter it became; the offensive smells seemed farther away and the noise didn’t bother me as much. The sun was high and I was feeling good.

These people, my neighbors, who I had always ignored on my daily route, had welcomed me in as if I was brand spanking new. They asked me to come back so they could show me where the good food spots are, the churches with the best music on Sundays and a fresh flower shop that arranges flowers with an artistic ease.

On my way back home I was more aware of the beauty around me, the people, parks and flowers, not just the trash and filth.