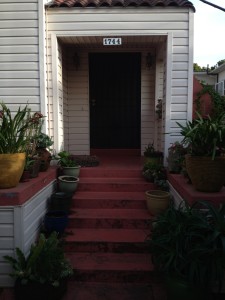 Gaylynne Hudson and her husband bought their East Oakland home at the height of the real estate boom. They paid about $370,000 for their home off Foothill Boulevard  in February 2005. Both were teachers working with immigrants students in the Oakland Adult & Career Education program, a division of the Oakland Unified School District.

Together they were able to make the monthly mortgage payments.

But in 2009, things started going downhill for Gaylynne. Today, she’s facing foreclosure – what Gaylynne describes as an intended illegal sale of her house in early January 2013.

Four years ago, California changed school funding and put adult education money in Tier III Categorical Flexibility, meaning that what was formerly a very flush and economically stable adult education program in Oakland found its funding diminished over the next years by more than 90%.

Hundreds of teachers of teachers were laid off as a result. Gaylynne was able to keep her job until June 2011. A tiny portion of the budget was restored and Gaylynne was hired back on a part-time basis in January 2012. But her salary was cut by more than half to $462 a week – so low that she still qualified for a small unemployment check as well. She was laid off again six months later, and has not been able to find work since.

Soon after these funding challenges started, Gaylynne’s marriage also became rocky. She and her husband separated, leaving Gaylynne to handle the mortgage, insurance and property taxes, with less than a quarter of financial support.

Having depleted most of her resources, including liquidating or dipping into some retirement accounts, she eventually was unable to afford her house. She began working with the Alliance of Californians for Community Empowerment (ACCE) , a home defenders non-profit agency, as well as then-Assemblyman Sandre Swanson’s office.

With their help, Gaylynne contacted the Wells Fargo Home Preservation Specialist to work on loan modifications, delaying the sale date and taking the property out of active foreclosure.

Last New Year’s Eve, Wells Fargo sent her one of several letters, this one advising her that she did not meet the requirements for loan modification, that the sale date could not be pushed back, and the home could not be taken out of foreclosure.

Gaylynne says that Wells Fargo would have be in violation of the law if they had gone ahead with their planned foreclosure earlier this month. She sites the Restriction on Dual Track Foreclosure – a part of the Homeowner Bill of Rights, which just took effect on January 1 – which prevents advancing foreclosure while the homeowner is working on a loan modification.

Gaylynne planned what she described as a “bank action” for Monday, January 7th. She and at least ten friends and other supporters, walked into the Fruitvale  branch of Wells Fargo, and handed the bank manager a demand letter, requiring that Wells Fargo immediately cease the sale of her house.

She had also asked her friends to call the Wells Fargo Regional Vice-President and Home Preservation Specialist, demanding that they stop the sale and give her a loan modification. The Regional VP soon disconnect that phone number, although apparently another phone number was  found. The bank finally agreed to delay the sale of the home for one month, until February 7.

If Wells Fargo does move forward with the sale of the house, Gaylynne plans to remain in her home.  “If they sell the house,” she told me, “I’m going to occupy this home.  It’s not acceptable that they can violate rights. And I won’t accept it.”

“It wasn’t hard to be a Tupac fan when I was in high school,” says Oakland rapper, music producer, record label owner, and dad, Tahajiye Edwards. “But people thought you were a little strange when […]

For most Americans, December is usually a time when the normal routine of life slows down a little bit and people reconnect with friends and loved ones. It is a time for sitting in traffic, […]

After 19 years in Oakland, the Laurel Book Store closes. […]