I received this email early one morning this past week: “Hey guys, strange jeep across the street from us. Two people inside. They laid back in their seats when we went outside … Something feels off. I called OPD non emergency….”

Turns out it was a couple of Latino workers catching a few winks before starting work on a nearby house. Hypervigilance? Perhaps, but with the rash of recent daylight shakedowns and home robberies in the Laurel district, maybe not.

Fred, long retired from a local nonprofit, laments the loss of largely blue collar, working class residents in his Upper Diamond neighborhood where he raised his family of four. He said, “it seems a little more white, a little more techie,” he said. “You see more young people walking a dog, sometimes two dogs, and sometimes even a kid.” 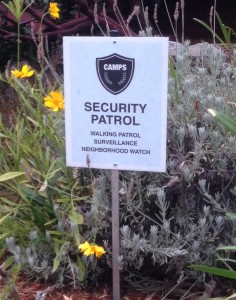 Sandy, a retired public school teacher who substitutes and lives in Leona Heights, fears less for her personal safety since the neighbors hired  a private security patrol. Crime is down. More and more cyclists pass through the neighborhood. Home prices continue to rise. Looking at another bump in rent at the first of the year, she’s decided to move north to Mendocino County where she can find a similarly sized place for $1000 less.

A few neighborhoods to the north, an Oakland Voices colleague was stunned to discover that he was the suspicious African-American male being tracked on social media as he walked down the street where he lives. Recent press reports suggest that his experience is not uncommon (see http://www.eastbayexpress.com/oakland/racial-profiling-via-nextdoorcom/Content?oid=4526919).

Neighborhood security, rising home prices and rents, racial profiling — both subtle and stark — are changing the landscape across E. Oakland, from the foothills to the Bay.

Down the hill less than two miles away, another Voices intern is fighting an eviction notice, having already seen her grandmother’s longtime cherished Oakland home lost due to foreclosure.

Patrick, who works as an event planner downtown, grew up in Maxwell Park where he recently purchased a fixer-upper. He enjoys the bar and restaurant scene on occasion, but these days he finds himself spending more and more time working on his house. He noted that with rising rents, “most residents can’t afford to get out of terrible neighborhoods and many can’t afford to even stay.”

Down on International Blvd near 50th where Tom works at a community service agency and lives nearby, outside investors are rehabing and flipping houses. Several tech firms have reportedly swooped up a number of old warehouses. Surveying the ongoing work by AC Transit as it lays the groundwork for its new express route, he questions who it will really serve. “Business near bus stops may pick-up. But will it help out senior citizens and low income folks who rely on buses? Or, just provide a better commute for people in San Leandro getting to work downtown or in Berkeley?” 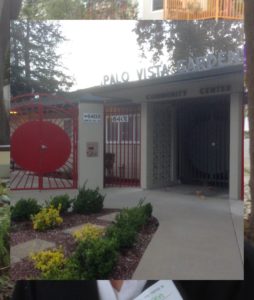 Meantime, further out, off International Blvd on 64th Ave. at Palo Vista Gardens, a senior housing development on 64th Ave, two women have taken up the fight for affordable housing. I met Karen Smulevitz and Theola Polk while researching the housing crisis at East Bay Housing Organizations (www.ebho.org) back in September. Both have become advocates and spokespersons for Oakland Citizens United, a coalition of Coliseum area neighborhoods, which lobbies city officials for decent housing that will keep long time residents in E. Oakland. Both women also enjoy a good laugh as much as a good fight.

Smulevitz told me, “we’re working to make sure that the city adopts a community benefits policy for the Coliseum City and any other housing project that comes along in the city. We’re demanding a certain percentage for affordable housing, a hearty impact fee, and, of course we want local hires, union hires.” 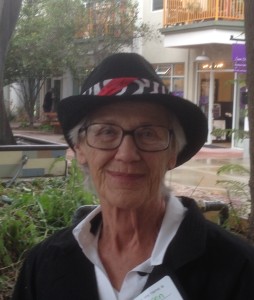 When her daughter and grandson were recently displaced out of Oakland to the Sacramento area, she said, “it took a piece of my heart.” But the loss is softened by the friends, like Polk, she’s found at Palo Vista Gardens over the past three years. “If it weren’t for them, I don’t know where I’d be.” 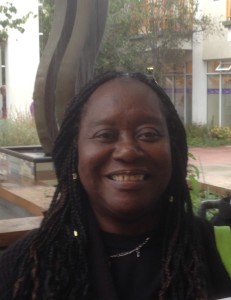 Polk is particularly passionate about the difficulty families have in finding decent housing in E. Oakland. “As citizens of Oakland, we would like to be recognized,” she said. “If they have all this money for all these big high rises, then they should have some money for lower income families. What’s really needed is more affordable housing with three and four bedrooms for families.”

Earlier, EBHO Executive Director Gloria Bruce explained to me that building the voice and power of community members is one key leg of EBHO’s multi-pronged work. The organization works in coalition with other housing rights advocates, including Causa Just a Just Cause and East Bay Alliance for a Sustainable Economy. “Oakland United’s message is very clear: we want investment,” Bruce said. “We don’t need a sea of parking lots and underutilized industrial space. We want something to happen but in a way that will benefit existing residents.”

Bruce pointed to the political momentum behind “A Roadmap Toward Equity,” (see http://www.policylink.org/find-resources/library/roadmap-toward-equity), a comprehensive blueprint and action plan that promises to keep long time Oaklanders in their homes. “It’s elevated issues of housing to the forefront with city council. It’s a really important tool and I really hope that a lot of what’s in it gets implemented,” Bruce said.

She feels one immediate, achievable goal is an affordable housing impact fee for market rate housing developers. Such upfront fees — $20,000 per proposed unit in neighboring Emeryville and Berkeley — would generate much needed funding dedicated to affordable housing. “As you can imagine, developers are lined up against it which means the community will need to continue to push hard,” she said.

Eighty-seven residents did just that in public testimony at the Sept. 30 city council meeting when the Road Map’s recommendations were formally accepted. Legislation authorizing an impact fee could come before the council as early as December. Among those who addressed the council was Smulovitz who spoke to a larger vision for all Oaklanders:

“I want to thank you for putting the words housing and justice together. Oakland is a special place…. We can and we must do all it takes to alleviate the suffering of people who need housing…. Oakland has a chance to spread the thought of the beloved community all over the city. in each section, each district, each housing development. The beloved community, as Martin Luther King said, is a global vision in which all people can share in the wealth of the earth. We need a policy that is codified. We’ve heard so many great ideas about how to solve the housing crisis. Let’s put them together and make them law in Oakland.”

Filed under: 2015 Project Blogs, Gentrification, Life in East Oakland, My Neighborhood, Our Neighbors