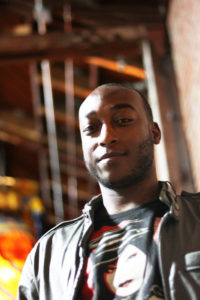 However, for the sake of this piece and your sanity, I will refer to him by just his first name, Dre.

The 25-year old first started with spoken word when he was a freshman in high school. Through a writing workshop he attended, he met the host of Tourettes Without Regrets, an underground performance art show in Oakland.

“It was bananas,” says Dre, remembering the first time he saw the show. TWT inspired Dre to keep going with spoken word. Since then, he has performed around the United States.

Dre says his work is “centered around mostly real life and real life experiences.” Dre says he likes to “let my poetry be as real as my life is.”

Most of Dre’s work is inspired by his experiences living in East Oakland.” There’s a lot of my poems that are about friends and family members that have been murdered and being able to speak about it like that helps me heal those wounds.”

One of Dre’s poems is about the murder of 3 of his friends. Two of them were killed just a day a part from each other. In the poem he writes how he and others around him “saw red” for the next 2 days after. 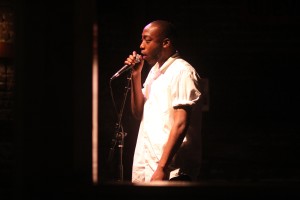 Dre performing his host duties during the Berkeley Slam at the Starry Plough Pub in Berkeley. Photo: Katrina Davis

“We became demons,” the poem goes, “plighting to perpetuate a cycle older than we.”

After their deaths, Dre says he saw himself “turn into this fucking monster, ready to get revenge and just do whatever. And I just can’t talk about that conversation, but in the poem it’s like, ‘Yeah I think about that shit, too.’”

Growing up in East Oakland, he says, “the violence and crimes that go on, you don’t talk about. You’re just not supposed to name names, you’re not supposed to say shit out loud.” Dre says his art allowed him to express his feelings about “how the shit went down.” Poetry became one of the few ways he saw to address some hard experiences.

“I just shed all my fear about what anybody thought about how I felt,” Dre says of his decision to step on stage and share his work. “Every show that I’ve ever performed at across the entire country, there will at least be one person in the audience to come up to me and and be like, ‘Yo, thank you for sharing,’ and that ‘I feel the exact same way,’ and that’s really all I care about.”

Dre says that spoken word is a way to explore different kinds of poetry, and he’s taught himself a lot about the art form. Through his non-profit Digital Storytellers, he’s been able to educate youth in various schools, empowering them to “speak their minds in an articulate way,” particularly with their elders and peers.

“Discovering your voice,” Dre says, “just allows you to be able to vocalize your feelings about stuff instead of holding it inside until it just boils over into something disgustingly ugly or violent.”

You can catch Dre, aka Duke the Bossman – spoken word artist, mc, host, and educator –  performing around the Bay Area.