Ask Lorrain Taylor, founder of 1000 Mothers to Prevent Violence, or Rev.Damita Davis-Howard of Ceasefire Oakland about gun violence.  Both Oakland women have lost children, family members and friends to the local and national epidemic of gun-related crime.  And both women are in the forefront of efforts to raise awareness about the harm committed by gun-wielding criminals.

They will be among the thousands of people across the United States who wear orange on Tuesday June 2nd to raise awareness about the multiple-effects of harm created by gun violence.  “Every Town Against Gun Violence” sponsors the event; orange was selected because it is one of the colors commonly worn by hunters to protect themselves from errant gunfire.

The day is co-sponsored by nearly 50 different organizations across the country.  They include national and state-based gun control lobby groups, faith-based, parents, children’s,  domestic violence organizations,  physicians, mental health providers and human rights advocates.  What they share is the fact they are often among the first people to witness the tragic effects of gun violence in their communities.  It is part of a greater month-long effort to educate the American public about the danger that unrestricted gun access creates in communities. 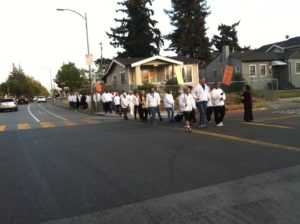 According to the Brady Campaign To Prevent Gun Violence website, 1 in 3 people across the United States knows someone who has been shot.  Since 2009, an average of 32 Americans are murdered by guns each day and an additional 140 people are treated for  gunshot wounds.  Fifty-five people commit suicide each day using a gun.

Oakland is no stranger to gun violence.  However, thanks to the concerted collaborative efforts of the Ceasefire Oakland project, there has been a steady decline in local gun violence since the program began in late 2012.  The approach was nurtured by former Oakland mayors Ron Dellums and Jean Quan who were inspired by the work of David Kennedy on a similar initiative in Boston, MA.  Ceasefire Oakland is a multi-faceted strategy involving the Oakland Police Department, faith-based leaders, community-based organizations, service providers and citizens of all races and creeds in Oakland. 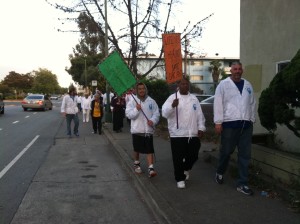 The program has four principle facets: frequent call-ins to either potential victims or perpetrators of gun violence, the provision of social services to help young men change their lives, a weekly community peace walk led by Rev. Damita Davis-Howard and  procedural justice training in which faith-based leaders such as Rev. Ben McBride of City Team Ministries work closely with the police to help them become a more positive presence in neighborhoods riven by gun-related crime.

For more information about the national day to raise awareness of gun violence in the United States visit: info@everytown.org.