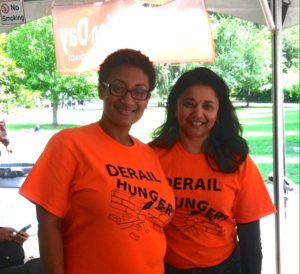 “What if they held a dinner and everyone was able to eat?”

This is the question 385 anti-hunger advocates posed to their state assembly representatives last week in Sacramento.  Busloads of multicultural citizen activists from around the state, decked out in bright-orange t-shirts inscribed with End Hunger!, arrived Tuesday night and Wednesday morning to lobby for proposals which can offer relief to lower-income people of all ages. The action was organized by the California Hunger Action Coalition (CHAC).

The brutal budgetary cuts imposed on California by the governor and state legislators since the recession of 2008 have left less-advantaged people hanging on by their fingertips as they creatively scramble to determine how to feed themselves after paying monthly rent and bills in California’s inflated real estate market.

Senior citizens and disabled people who’ve been especially hard-hit by recession- era cuts were well represented in the day’s activities.  Most of them depend on small Supplemental Security Income/State Supplemental Program (SSI/SSP) checks to pay for rent, food and other essential living needs.  For most of of the 1.3 million California residents receiving the payments, this has meant living on $899 a month,  below the federal poverty level.

Furthemore, the small, annual cost-of-living adjustments (COLA) were rescinded when the recession hit.  The loss of income has thrown more than 1 million blind, aged and disabled Californians into poverty. Worse yet, those receiving SSI/SSP are ineligible for CalFresh assistance, the former food stamp program because of federal guidelines.

Stories of fear, imminent homelessness, missed meals, scouring neighborhood pantries and soup kitchens figured prominently in the day’s testimonies.  Carmelle Camillo, a Sacramento native and disabled muralist, said she is forced to live in a “really bad neighborhood” while suffering from severe depression.  Becky, an Oakland resident who has worked most of her life until losing her job because of her disability, broke into tears as she described to Assemblyman Richard Gordon’s aide the “humiliation and uncertainty created by food insecurity” she has experienced since her benefits were cut in 2008.

This group of our hidden neighbors are seeking a $200- a- month increase,  to $1099, in  their benefit checks which would lift them above the federal poverty level.   St. Anthony Soup Foundation volunteer Mary Sheehan, associated with the famous Tenderloin food program since it began in the 1950’s, noted that people “who come for a hot meal at noon often lack the basic facilities to prepare another meal for the rest of the day.” 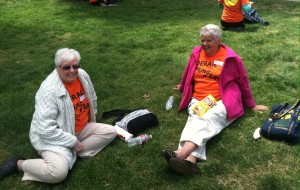 But Wednesday’s agenda was not simply about petitioning for government assistance.  Creative and constructive ways to improve the standard of life for Californians were also suggested.  Assemblywoman Susan Talamantes Eggman of Stockton, a military veteran and social worker, has proposed legislation which would offer a tax credit of 20 percent to most California farmers for the wholesale value of foods donated to the food banks. Food banks must compete with other ways growers dispose of excess crops – including allowing food to go to waste.  The tax credit would increase the incentive to donate crops to food banks across the state.

State Senator Holly Mitchell of Los Angeles who spoke briefly during the lunch break summed up the sentiments of the crowd quite poignantly.  While she said she supports  Governor Jerry Brown’s vision to improve California’s infrastructure, transportation systems,  address global climate change and other environmental hazards, she suggested there are more basic needs.  She encouraged the enthusiastic advocates to be sure the governor “does not forget that food security should be a basic right for seniors, the disabled and young children.”