When I first spoke with Hazel Streete of the “Her Resilience: a Mural for Women Affected by Violence” project in the late fall of 2014, her team had just found a home for their project at Park Avenue Garden after a long search. Saturday, March 21st, the Park Garden was lined with colorfully painted panels featuring the portraits of women whose lives have been affected by urban violence, and filled with a diverse group of people there to attend the unveiling ceremony.

As I entered through the front gate, it became clear this was no casual effort. The garden is on a stepped terrace: the first level had an information table, a kid’s craft area, and a booth from Mamacita’s Café, a woman-owned pop-up catering business that became closely allied with the “Her Resilience” project. 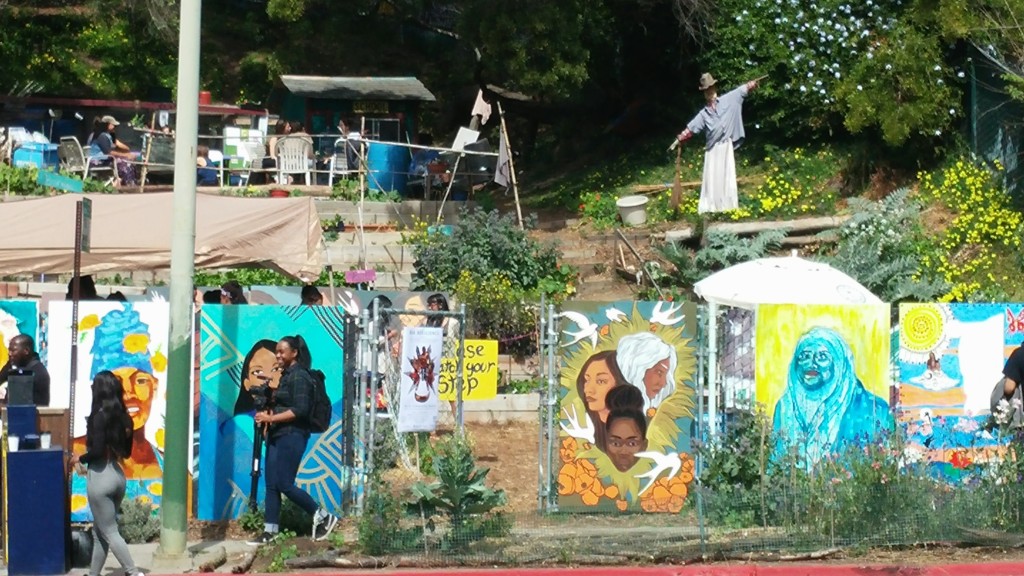 The next terrace up featured panels by lead artist Nicole Gervacio, who explained the artistic process she used to work with the women who offered up their stories to be used in the mural’s panels. “I gave them guidance on how to approach their subject visually.” she said. The panels displayed, for example, depicted a long poem on a scroll, a queen of hearts playing card, and a collage of an old and new family photograph. Gervacio came up with a color palate of rich browns, vibrant turquoise, and sunny yellows that the panel artists used to paint their pieces. 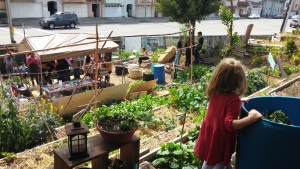 Further up the hill on a higher terrace under a shady oak, a group of women were engrossed in quiet discussion with one another. I learned later this was a dialogue group that focused on analyzing the cultural and social violence against women in our community. A male-centered group discussed the same in a separate area. 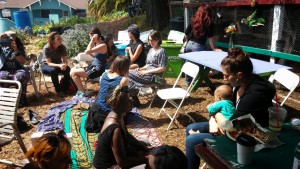 I descended back down to the entrance level to find project leader Hazel Streete enjoying a moment of quiet at a small table. This project all started with her vision to honor the memories of women who suffer violence, and the stories that disappear from the media and public memory, leaving families to grieve alone. She and her team made a vibrant, public splash that showed what unified voices could do, and the communities of Oakland responded. I asked her what she thought of the end result. “It seems like the project evolved into something else every time we talked to someone about it,” she said and smiled.

Streete told me I missed the opening dance ceremony performed by Calpulli Huey Papalotl, who reportedly stopped traffic on Park Avenue for a while. We observed families and groups of friends enjoying lemonade and tamales, and photographers taking pictures of the mural panels. She looked up the hill to the next discussion group that was gathering among the springtime flowers, and said, “I never thought it would become all this.”

“This is something people do not know. The history books do not carry us.” – Ericka Huggins […]

Late in the afternoon next to the Grand Lake Theater, a group of strangers piled into a van to have a one-of-a-kind, educational experience in The Town. Called the “Oakanda tour,” this specialized guided tour […]

Her Resilience: Women in Control of their Own Image

Mural concept art by Nicole Gervacio Early in the morning on April 5th, 2014, the body of a young woman by the name of Kimberly Robertson was found, raped and beaten in Oakland’s F.M. Smith […]