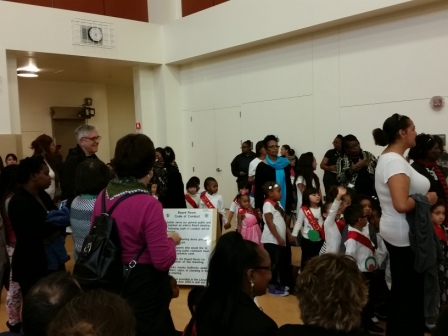 Smiles filled the room and civility reigned-in disgruntled discourse for most of the six-hour meeting. Mothers and fathers took pictures of their babies and spectators graced each other with respect, too often absent because of OEA members and supporters noisily expressing dissatisfaction with their contract.

The children’s grace was infectious that night. Decibels quieted and calm emerged. From this sea of tranquility rose early childhood educators and parents. They spoke with pride and  each gave one-minute speeches in support for Superintendent  Antwan Wilson’s proposed Early Childhood Education Program. All board members’ faces reflected agreement with their presentation.

After parents had their say, they bundled up their babies and disappeared into the night. Slowly peace faded into noise and the meeting continued with typical pretense, no disrespect intended. That is just business as usual for the Oakland United School District; however for a brief moment in time, pre-kindergarteners, our future, showed us another way—hand-in-hand.