Editor’s Note: This story was written during the Christmas season. Given the recent proposed immigration bans and the escalation of deportations of undocumented people, it is sadly more relevant than ever.

It is December 23 and I’ve just arrived at the Oakland Catholic Worker House on International Blvd. It has rained steadily most of the day, but the rain has now stopped and it’s just cold. The wet street shines in the headlights of passing cars.

I’ve come for the Sanctuary Posadas that will begin here and end several blocks away. Musician and activist, Francisco Herrera, is leading a group of more than 20 migrants and activists who have gathered with lit candles on the sidewalk; they are practicing the songs that they’ll be singing this evening. 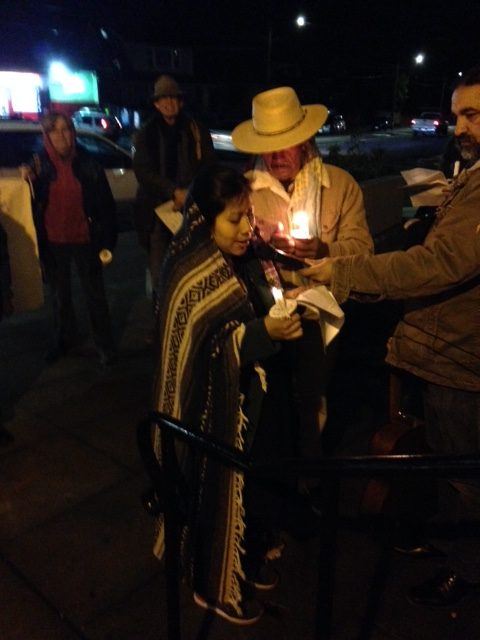 The posadas are a re-enactment of Mary and Joseph’s search for lodging in Bethlehem that is performed before Christmas throughout Latin America and the Philippines, as well as in Latino neighborhoods in the U.S. Posadas are traditionally performed over nine nights, representing Mary’s nine months of pregnancy.

The Sanctuary Posada in Oakland differs from traditional Posadas in its emphasis on the lives of migrants from Central America who cross the border from Mexico. The organizers have created an original script that reflects the experiences of those who come to Oakland. 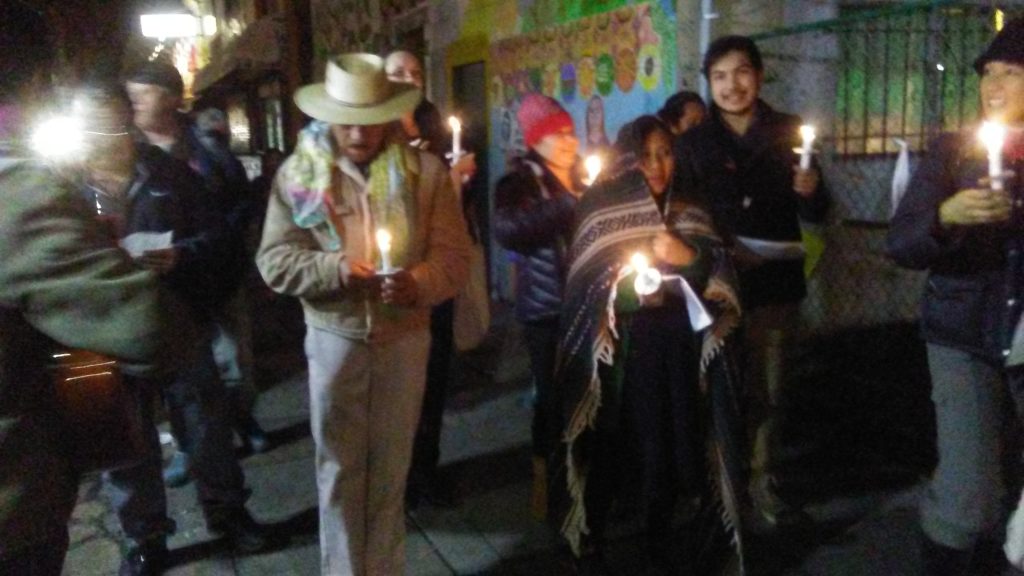 At the start of the Sanctuary Posada

María and José are at the border, seeking sanctuary. The narrator begins the story, which is told in English and Spanish:
“We find María, nine months pregnant, and José and their family and a group of migrants finally arriving at the border after a very long and dangerous journey . . . They approach Border Patrol to turn themselves in, to ask for protection and entrance under their rights as refugees and migrants.”

María pleads to be allowed in, to escape from the violence and persecution in her home country: “Please, help us. Please let us come in to seek protection.”

The narrator tells how María and José are arrested because they do have not papers. They will be sent to separate private deportation facilities and will have to appear in court the following week, when a judge will determine if they have legitimate asylum claims.

While walking to the second stop, people sing and sometimes chat with neighbors in Spanish, English, and indigenous languages. “I came because I heard about it when I went for help at the (Catholic Worker) house,” says 18-year-old Santa when I walk beside her and her girlfriend. They are both from Guatemala and, although we speak in Spanish, they tell me their mother tongue is K’iche’.

The group approaches the second stop, the Melrose Library on Foothill Blvd. The narrator tells how María and her two children have been released, but José has to pay a $10,000 bond before he can get out. María goes to Oakland, where she has an aunt, whom she hasn’t seen in seven years. The landlord tells the aunt that María and her children must leave by next Friday or both families will be kicked out.

María looks for a new place to live, but is rejected and told that there are a lot of people who want to rent the room she is seeking and to look elsewhere. 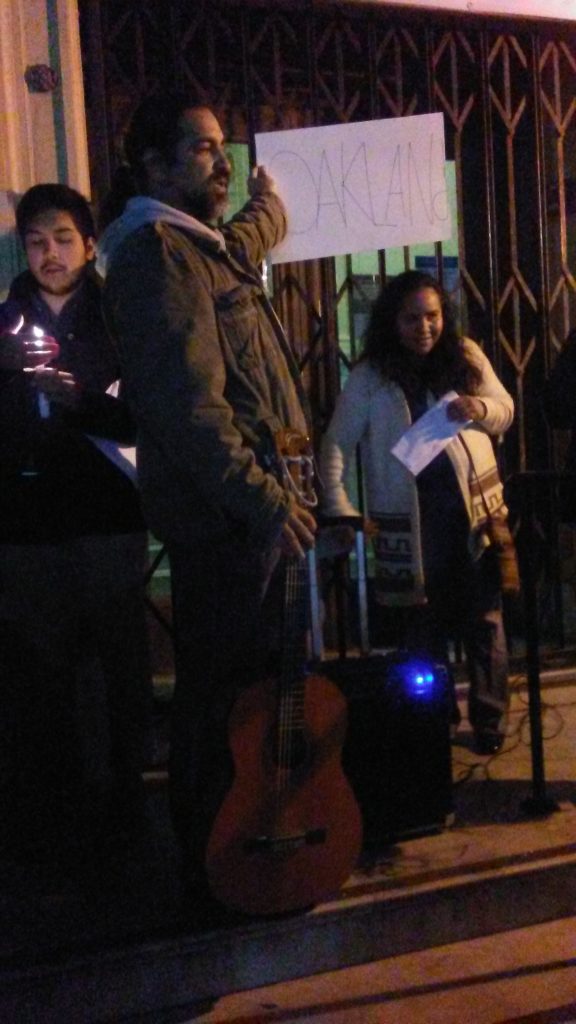 Being refused a place to stay in Oakland

As we walk to the third and final stop, Santa and her friend have to leave to retrieve their clothes from a nearby laundromat. They hope to rejoin the Posada at the final stop, where a meal will be served.

I notice a mother and daughter carrying signs and begin talking with them. The mother, Olga, tells me that she and her daughter, Camila, who is 8, are also from Guatemala. Olga’s sign is in English and carries two messages: Protection Not Deportation and All Refugees Welcome. 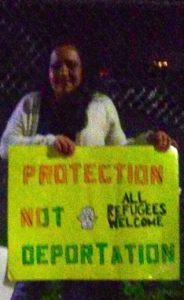 Camila’s sign is in Spanish and says, “Jesucristo fue un inmigrante,” that is, “Jesus was an immigrant.” 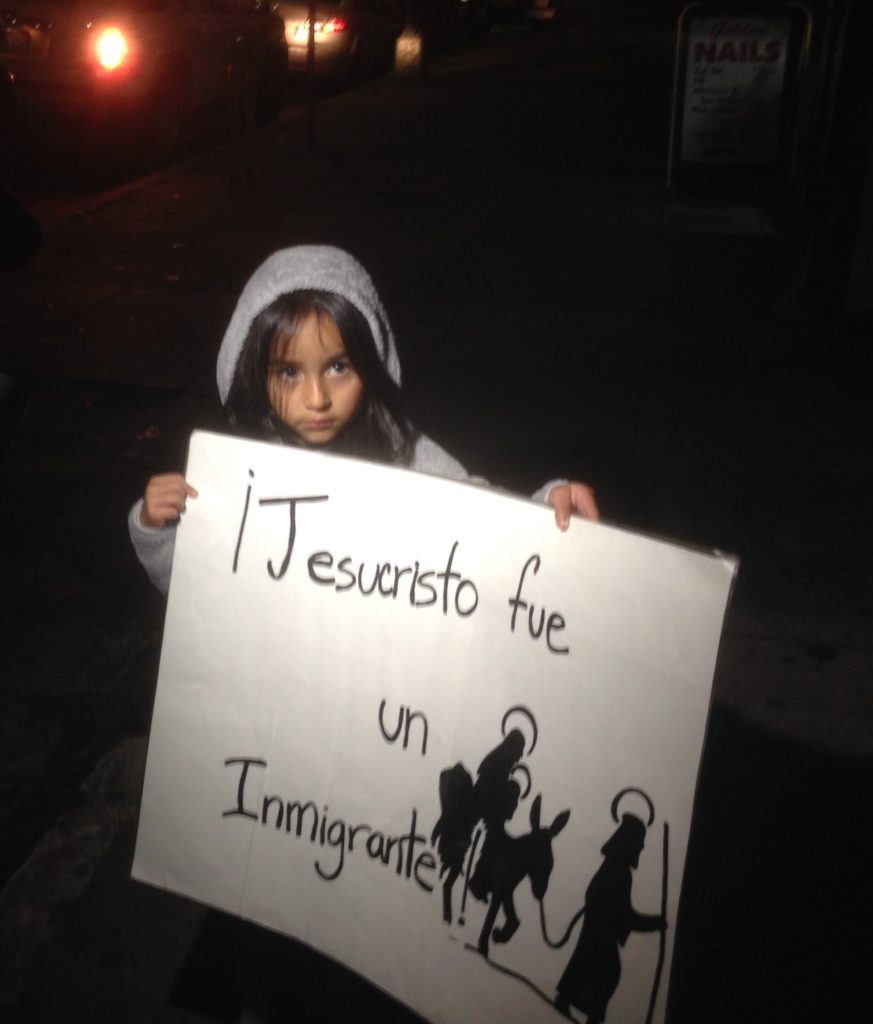 By the time we arrive at the third stop, at the Presbyterian Church on High Street, which serves a predominantly Latino community, the group of participants has swelled to more than 40. Parishioners gather on the front steps of the church.

The narrator says that José has been released from detention and reunited with María and their children. They have come to the church with another family that has lived in Oakland for many years. The father of this family, Manuel, has his own construction company, hires three workers . . . and is afraid of deportation. “My whole family is here. Don’t let them take me away. Will you offer sanctuary so my family will not be separated?” Manuel asks.

Instead of being rejected, María, José, and other migrants are welcomed in by the pastor, Rev. Pablo Morataya, and the congregation of this East Oakland church. “We extend to you the hand of hospitality and love. We respect your courage, your generosity, your hard work, and your family. We will do everything we can to help and support you, to walk with you and accompany you,” they say.

“Can we build a sanctuary movement?” asks Herrera of the group of people who are about to spill into the church.
“Yes. ¡Si se puede! Yes we can!” call back people in the crowd. 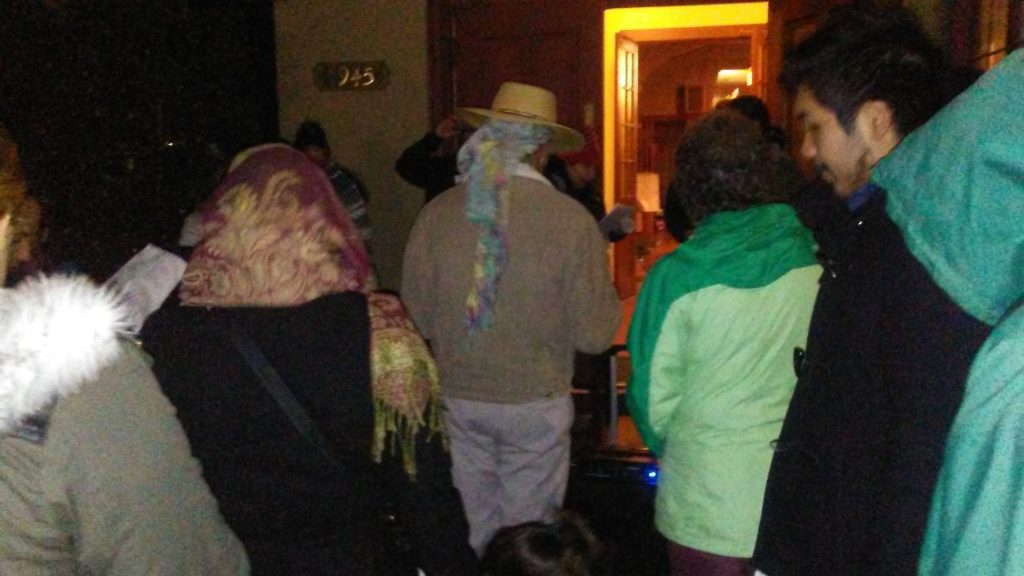 Being welcomed into and entering the sanctuary church

María and José are then led into the festively-decorated church by the pastor and members of the congregation. A final song celebrates a shared commitment to building a sanctuary in which people care for each other. Then everyone sits down to share a delicious meal of home-made tamales, hot chocolate, and bread.

This annual Sanctuary Posada was organized by a coalition of small non-for-profits and churches that advocate for migrants, including the Interfaith Movement for Human Integrity (http://www.im4humanintegrity.org/).