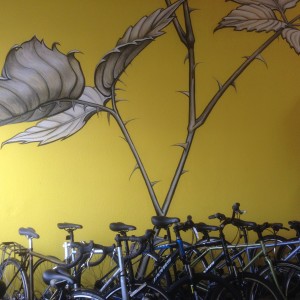 At any other bike shop, the word  ‘hubs’ refers to internal or fixed gear hubs and often, the messy job of repacking them with tiny ball bearings. The two bike mechanics, certified wheel builder and suspension tech at Laurel Cyclery — East Oakland’s newest and only full service bike shop on MacArthur near LaLoma — know the subject well.

But when you notice the “Black Lives Matter” sign in the front window or see the soaring sprig of berry vine painted by local muralist Mona Caron, cascading along the inside wall, you know “hub” refers to something larger. 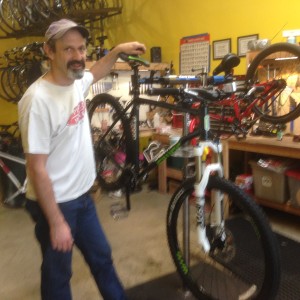 “I’ve been wrenching bikes since the late ’80’s,” said owner Jason Wallach, whose background includes two years of community organizing in El Salvador. “I just want to take something that I’m good at, that I like doing, and put it at the service of the community. Our first priority is to provide parts, accessories and high quality service for our diverse clientele who reflect the residents of E. Oakland. But we also want the place to be a hub for all types of community activity.”

The garden outside the back door — built by neighborhood kids with donated soil and material — and waylaid now by the drought and the start of school, is evidence of bigger dreams. 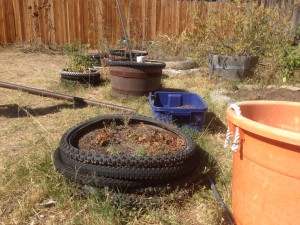 And at what other bike shop would you expect to hear poetry? Laurel Cyclery will sponsor a poetry reading featuring longtime neighborhood poets on Wednesday, Oct. 21.

“We want to celebrate our neighbors and see people better their lives and living conditions. But we also want to make sure it happens without displacement,” Wallach said. “Our business model integrates a set of practices that are contingent upon inclusiveness. We want development without displacement. Let’s call it zero-tolerance for displacement.”

If not for his own experience with housing displacement, Wallach might still be doing his pop-up bike repair business at the Sunday Temescal Farmer’s Market, as he did for three years. But when his landlord served an eviction notice hoping to flip his house, Wallach countered by contacting an attorney. The resulting negotiated settlement served as the start-up funds for the bike shop.

“We found a place to live over this way around the time I was thinking about making the conversion to a brick and mortar shop,” Wallach recalled. He said his research indicated that East Oakland is severely underserved when it comes to bike infrastructure.

He commends the handful of nonprofit, community bike projects which promote bike use and culture like The Bikery at 23rd and International.  Last Christmas, Laurel Cyclery matched customer donations to The Bikery, raising more than $500. “We have to collectively move away from the combustion engine. That’s a huge question of racial and transportation equity and we want to be part of them and the forces that address those issues.” 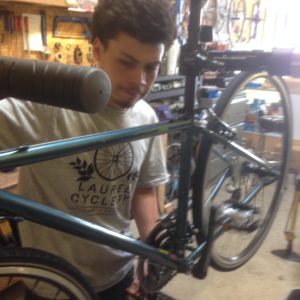 Inside the long, narrow space neatly lined with bicycles and accessories of all shapes and sizes, the full diversity of the Laurel district was on display on a recent Saturday morning. Two teens told Wallach they would return the next day when it wasn’t as busy and he would have time to check out their bikes.

Wallach worked the counter in between putting the finishing touches on a newly- purchased bike at the rack behind him. At the adjacent rack in front of the tidy work bench with the full array of bike tools, mechanic Andre Martinez intently performed a tune-up: lightly lubing the chain here, adjusting a brake cable there.

Meanwhile, young Zay Wilson-Hoffman, still in uniform from his morning soccer game, was nearly speechless at the thrill of getting his first bike. Moms Jennifer and Lisa were equally pleased, both with their son’s joy and with having “a local bike shop, where we can get great service and get to know the owner,”  Jennifer said. 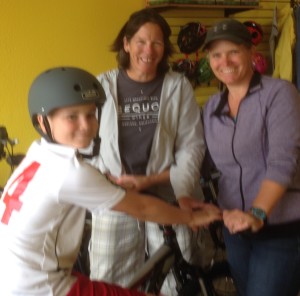 A bit later, a neighborhood girl, Lexi, coaxed her parents through the front door. Moms Helga and Sola weren’t able to buy a bike that day,  though Lexi already had her eye on one. Instead, Wallach showed Lexi the backyard garden, encouraging her involvement and suggesting that he could show her how to change a flat tire in an upcoming class.

“Traditional bike shops tend to cater to the guy we call, ‘the white man in spandex’,” Wallach told me later. “A few of those guys come through the shop and we’re just as happy to serve them as the trans person who may be getting their first bike in 15 years and are facing their unique commuting challenges. Or, the mom who wants to use her bike while taking her kid grocery shopping.”

The Laurel staff is tuned into what motivates customers to walk through their doors. “Young men of color share their experiences of being sized up,”  Wallach said. “Young women of color talk about not being taken seriously as cyclists. We’re familiar with the ways bike shops do this and we’re happy to learn from their mistakes. These aren’t just issues of being a good business, it’s about being a good community member.”

Most of Laurel Cyclery’s clients come from the surrounding neighborhood. Word of mouth has attracted more customers who wish to support its reputation for local service work and political activism.

“We’re just a small, community-based bike shop trying to address the needs of the diverse community of cyclists that comprise E. Oakland,” Wallach said. “We have a year and a month’s experience now. We’ve learned a lot, getting to know the community, working with folks, learning to adapt to their cycling needs. It’s been really great.”