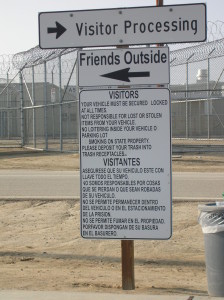 There are layers of instructions for prison visitors, starting well outside of the gates. Photo: Debora Gordon, Oakland Voices

On Sunday, December 9th, I headed back to prison. When I arrived, I learned the previous day’s lock down had been lifted. Many of the same visitors were there again. The woman who had worn  the six-inch heels on Saturday was now wearing sneakers.

One young woman in her 20’s was visiting her husband, who was serving a 20-year sentence. I mentioned that it must be hard to be separated for so many years, and not being able to really build a life together.

“No,” she said,” to my surprise. “I like it this way. I always know where he is, he doesn’t chase other women, and I just see him when I want to.”

Another woman, also in her 20’s, told me she had married her husband after his incarceration, and this arrangement worked well for her.

When I was called first into the screening area for my 8am appointment, I asked if it would take more than 2 hours for Lam to come again. To my surprise, one Correctional Officer (CO) turned to another and told them to summon Lam before I was even processed through the screening room.

By the time I got into the Visitation Room, Lam was actually coming in the door. I already felt like I knew him better, and I was anxious to learn about his life and his version of events that lead to his incarceration.

Lam’s family left South Vietnam in the late 1980’s, a few years before Lam was born in Oakland in February, 1991. He did not know much about his family’s life in Vietnam, nor why they had settled in Oakland. Lam’s parents had three sons together, but only Lam was given a Vietnamese first name. (I recalled him telling me even when he was my student, that he had not liked his name when he was a kid. Other kids teased him and called him “Lambchop,” which also later became a gang name, along with “Lamborghini.”)  His brother Jim, now 19, is studying engineering, and his brother John, 15, is a high school student. 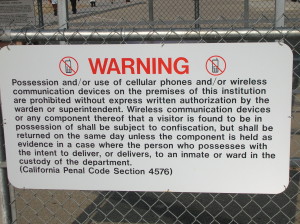 More warnings on the way into the prison. Photo: Debora Gordon, Oakland Voices

When Lam was seven years old, his parents separated. A few years later, as far as Lam knows, his father was either strangled or stabbed to death in Oakland, due to some conflict related to gambling or drugs. His mother eventually went on to another relationship, and had a fourth son – Lam’s half-brother, Kevin, now 12 years old.

Lam told me his mother has never learned English, so he speaks fluent Vietnamese, but has never really become literate. He did well in elementary and middle schools. He participated in spelling bees and was a break-dancer, while maintaining a 4.0 average at Urban Promise Academy, where he also met one of the girls, Janette. She was in the car the night of the shooting.

Lam eventually went on to Fremont High, and then transferred to the Sojourner Truth Independent Study Program (ISP) in Oakland, where I became his teacher for about a year and a half.  He wanted to attend the ISP so he could work and go to school at the same time, and so that he would not have to attend classes all day for five days a week, as he had slipped into habitual truancy while at Fremont.

He worked at Office Max for a few months, and bagged groceries at Lucky. But his mother eventually asked him to stop because his income was interfering with their general assistance income. So, he began hanging out in the streets. His mother, and his putative stepfather (they had never married) threatened to throw him out if he did not start attending school regularly and stop gangbanging, but they never actually did. 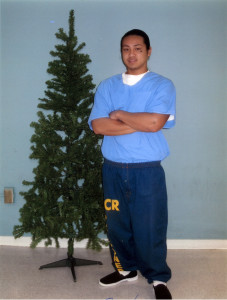 Growing up in the Fruitvale district, many of Lam’s childhood friends were Latino. They were becoming increasingly involved in gang activity, and so was Lam.  When he was about 15 years old, he and some other boys began stealing cars with scraped down keys called “jingos,” and going on joyrides, which eventually landed him in Juvenile Hall at the end of his sophomore year in high school. This was when his mother came to see me on the last day of school without being able to say much more than “Lam jail,” over and over again.

Lam said that he and 2 other boys had stolen a car that had been parked around 35th Avenue and Suter Street. They also had with them a gun stolen from Duane Mowrer, a Boy Scout Adult Troop Committee Member and a friend of Lam’s, which he told me was a .22 revolver, fully loaded with six bullets.

The gang dealt coke, and Lam enjoyed spending his money on clothes. His mother was upset, and tried to talk to him, but he did not respect the rules and limitations his mother and step-father tried to impose. Although he came back to the ISP in the fall after his first arrest for stealing a car, he eventually dropped out. 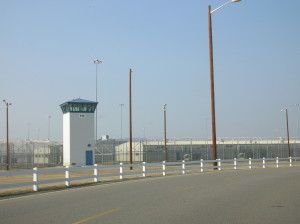 There are watchtowers all around the perimeter of the prison. Photo: Debora Gordon, Oakland Voices

I finally felt ready to ask Lam about the events the night of the shooting. He began by saying he and another boy, S., had been hanging out that Friday evening, looking for parties. They were standing outside a friend’s house, watching cars drive by. The car carrying Alicia, Janette and another girl and boy, drove by and stopped at a red light.

When the light turned green, they expected the car to continue driving, but instead he said it backed up. Lam claims that he and S. saw this as a possible threat. “I was present,” he told me, but when I asked him if he pulled the trigger, he said he could not answer.

It was at this point that I realized that although already in prison, serving a long sentence, with seemingly little more to lose, I was not going to get a forthright answer from Lam.  He gave me the impression that maybe he had taken the rap for another guy who – because he had a small child – did not want to go to prison.

I do not expect to ever really know if Lam was the triggerman. It does seem clear from all accounts, that he was, at the very least, present. His lawyer, David Kelvin, and his Scout leader, Duane Mowrer, both seem to have at least some doubt, that he pulled the trigger. While I wish to believe he was not the triggerman, whatever the real truth, he certainly did not stop the shooting from happening, and it does not change Alicia’s injury. 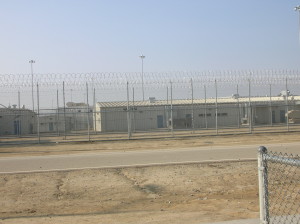 Lam was not arrested until Thursday, October 22nd, 2009, nearly three months after the night of the shooting. Police came to his house that afternoon, when he was taking a nap, and took him to the police station, where he was questioned, he said, “for eight or nine hours.”

He was then taken to the North County Jail, where he was arraigned about a week later, and held until the preliminary hearing the following July, when the judge encouraged him to take a plea deal of a 25-year sentence, rather than risk an even longer sentence at the hands of a jury.

I asked what he thought led to his winding up in prison. “Too much freedom,” he told me. “The choice was there, but I felt untouchable. I thought I wouldn’t get caught.”  This is not too different from what my Juvenile Hall students told me when I taught there one summer about 20 years ago. Those boys said their parents and guardians allowed them to do whatever they wanted, with few responsibilities or consequences.

When he arrived at Kern Valley State Prison, he was beaten up by some other inmates, as many new arrivals are. He felt somewhat fortunate at not being subjected to a “buck fifty,” a slice up the cheek that leaves a permanent scar.  He requested to be moved to the SNY (Sensitive Needs Yard) where random prison violence is much less likely.

Since being in prison, Lam has begun work on his GED, studying math, English, Greek mythology and history. He expects to receive his diploma in about a year. He also works as a porter, passing out trays during mealtime and cleaning up afterwards. Working is considered a privilege in prison.

Since Lam had written to me his wish to be forgiven, I asked him who forgiveness is for, the forgiver or the forgiven. “It helps more the forgiver,” he said after some thought. I asked what he would say to Alicia if he were ever able to speak to her. “I wouldn’t know what to say,” he said. “Anything I could say would not make a difference.” He told me thinks of her often. “I hope she is well,” he said.

Next: Notes from a Phone Call to Lam’s Mother