Oakland, How Deep is Your Love? 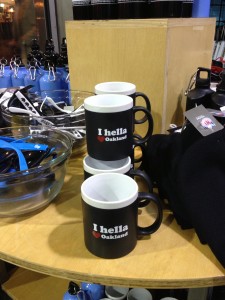 So, you hella love Oakland, but how deep is that love? Photo: Katherine Brown, Oakland Voices

Is it possible to quantify how deep your love is for something or someone? As I continue to delve into my love for The Town, I begin to reminisce.

My love for Oakland began in infancy, when my family decided to make this city our home in the late 1970s. In my 35 years, we have floated around several neighborhoods in East Oakland, and our roots here are as sturdy as the mighty oak that symbolizes this city. Growing up here, I have seen The Town’s share of ups and downs, but I tend to hold my memories of the ups much more closely to my heart.

Memories of going to the Castle and Malibu Grand Prix on the weekends – with golden tokens in hand, anxiously waiting in line to play the hot new arcade game, or to play a round or two of miniature golf.

Or reflecting on the countless hours my brother and I spent roaming Eastmont Mall while our mom got her hair done at J.C. Penney. Our visit wouldn’t be complete unless we got a scoop or two of the bubble gum ice cream from the candy store on the second floor. Ahhh, such sweet memories from when my love for The Town began. So fresh. So innocent. So real.

As I dig deeper into my memories, I can’t help but think of the positive reputation Oakland once had. From the 1980s to the mid-1990s, East Oakland was poppin! Local businesses – from T’s Wauzi’s record shop to Mother’s Cookies – were flourishing. And even though the Oakland Raiders left during that time, The Raider Nation stayed faithful until they returned to their rightful home. The sports stage was also shared by Billy Ball, The Bash Brothers, and Run TMC.

And let’s not forget the music scene. Sheila E., Pete Escovedo, MC Hammer, EnVogue, Too $hort, Tony! Toni! Toné! – the list runs deep. All of this greatness was rooted in the East. 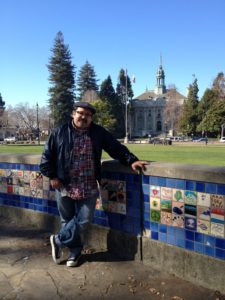 Oakland native Sergio Martinez’s love for The Town runs deep, but he has concerns about where the city is headed. Photo: Katherine Brown, Oakland Voices

I often reminisce about my city with my equally – if not more – Townish co-worker and good friend Sergio Martinez. The 38 year-old health educator was born in the East – at Highland Hospital, to be exact. He grew up in neighborhoods near Fremont High School, and around 23rd and E. 14th Street. “I did go to San Diego in the summer of 1994,” says Martinez, “but Oakland called me back.”

When Sergio and I engage in our Townish discussions, they are often peppered with points of nostalgia – like the programming that used to run on the Oakland-based cable network, Soul Beat Television.

Or local eateries and staples like Food King, Talk of the Town, and Kwik Way. And we can’t forget about the local clothing stores like Harputs and Z-man. All of these and more fueled the one-of-a-kind and esoteric culture that is simply Oakland.

And how about our lingo? If you don’t know that hecka and hella came from here, then you truly do not know Oakland, let alone genuinely love it. Martinez feels that Oakland “is unique – the music, art, our view of the world is very unique.”

With all of the originality in Oakland, how could you not love it? “Just look at the deep history,” says Martinez, “Oakland has had folks that have struggled and persevered. People see it and gravitate to it. The environment is a cultivator of culture. It provokes creativity.”

So what happened? Why did the momentum that the East once had stop? Why is the love that once existed now replaced with hatred? Nowadays, my city is on the map for actions that are no where near as positive as they were almost 20 years ago.

Oakland is “losing that culture through gentrification,” says Martinez, “which is good for business and the economy. For example, look at ‘Uptown’ and Temescal.” He sees The Town being “in a transition. Folks are moving out and new people are moving in.” Over the past few years, I have seen parts of North, Downtown, and West Oakland get some love, as neighborhoods in those areas get lots of attention via commercial and residential development.

But what about the East? 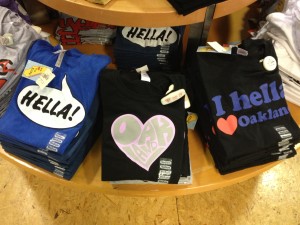 The love that you have for Oakland should not just be displayed on your t-shirt, but in the heart that lies underneath. Photo: Katherine Brown, Oakland Voices

As Sergio and I continue to talk about how the tide has turned in The Town, he makes this simple statement: “Am I a part of this new Oakland? I don’t know. This ain’t Oakland.”

I tend to agree with Sergio. I don’t know how I fit in to what this city has become. With this new wave of Oaklanders, it seems like The Town is being boiled down to a fad – slowly losing its identity as it becomes a caricature of other metropolitan cities.

My hope is to keep the positive legacy of Oakland alive. The Oakland that I grew to love.