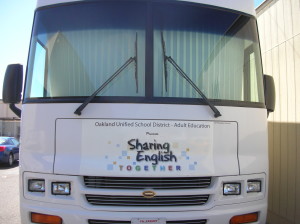 One of the coolest things happening in the Oakland Unified School District right now is the high tech mobile adult education classroom, an RV outfitted with Wi-Fi and laptops, driven by Teacher Don. The bus, which spends several weeks at about eight different elementary and middle schools around the district, is a hopeful note, in what has been a somewhat dismal prognosis for adult education throughout California for the last several years.

Sixteen-year veteran teacher Don Curtis, who cut his educational teeth in Korea, loves teaching in this context, on the bus. “This is my preferred environment. There literally is no other job like it, being able to take the classroom to where it’s needed. I can bring the classroom to the student, they don’t have to come to me. I love that part about the job.” 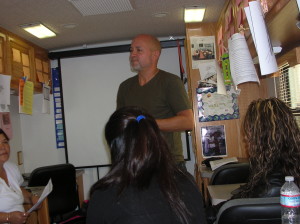 When I visited the mobile classroom, it was parked at Roots Elementary School in East Oakland. There were about 20 students, mostly Spanish-speaking, huddled throughout the bus at the workstations, learning how to use email to facilitate communications with teachers. They were also learning to access the ABI portal which provides information about student attendance and grades, as well as look at the OUSD website with links to homework help and other resources.

“It’s really about parents being involved in their kids education – through technology or through ESL, that’s the main thrust,” Don said. Due to the need to expand the number of schools served in the same amount of time with fewer teachers, Don proposed to Sue Pon, the Family Literacy Program Manager, that he adopt a “’boot-camp style’ to the instruction, really compressing what used to take ten weeks into just four.” While some elements of the curriculum were eliminated, Don described the current program as “more depth, less breadth.” 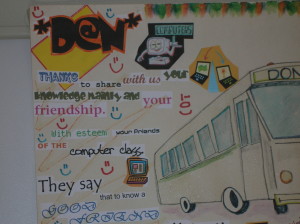 Like most teachers, Don learns from his students as they learn from him. “Something I admire about my students, that no matter what’s going on, whatever it took to get to the U.S., they come to class and have such a keen desire to learn. When I feel that coming from a student, I feel a responsibility coming the other way, too. Giving my all as a teacher – teaching, communicating with the students outside school, helping them get a computer, helping them with the issues that they may be having with their children.”

Don is acutely aware of how challenging it can be for parents, who may be working, and have other children or responsibilities, to get to classes. “I feel my job is ongoing because of the effort students make to attend the class and get an education. I am truly humbled. They have taught me to overcome obstacles and challenges. Many of our students are not educated formally, but their education has happened in different contexts. You can have a university degree, (and) you can have an education in the school of life.” 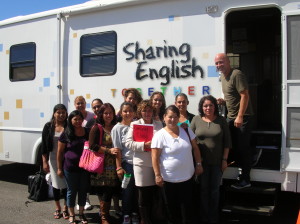 Don’s program was one of the few to survive three consecutive years of adult education downsizing in OUSD.  He commented on the current state of  California adult education, which is still undergoing drastic budget cuts. “It’s very obvious that the decimation of adult ed programs throughout the state is heartbreaking. I can’t even imagine how many students are not being served. What are they doing? How are they learning English? All these students that were in classes, I ask myself, ‘where are they now?’”

These are questions that have not been answered. At least, not so far.