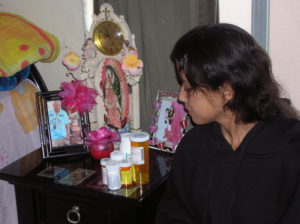 Since the shooting, Alicia has had to take several different medications to address her seizures, tremors and other results of her traumatic brain injury. Photo: Debora Gordon/Oakland Voices

At the center of this story are not only Lam, his family and his extended community. There is also Alicia – the most injured victim – and her extended family as well.  Most injured, because although all four of the passengers in the car at the time of the shooting have experienced trauma and ongoing repercussions, Alicia is the only one who was shot. She took that bullet to her eye, and today – three and half years later – she is still dealing with the painful consequences.

Prior to the night of July 31st, 2009, Alicia was a happy and energetic high school student, planning to return to Oakland Tech High School for 11th grade and to continue playing soccer.

She wanted to go to college, and, in a tragically ironic twist, work with troubled students in Juvenile Hall. Alicia felt she had a particular sensitivity to these students, having grown up and gone to school with so many students who had gotten into serious trouble. She told me she was not in a gang but had friends who were. Many of them had guns and had been in and out of detention. “It didn’t surprise me,” she said. “I was used to it.” But she thought that because she understood them, she could be someone who could really talk to youth who had gotten involved in gangs and crime.

When I met with Alicia and her mother Concepcion, I began by asking Alicia how old she was. She hesitated, then said, “Nineteen,” but looked to her mother, who nodded confirmation. Among the consequences of the shooting have been a range of cognitive difficulties, including short term memory loss. She was able to, somewhat haltingly, reconstruct the night of the shooting, her version of events jibing with what I understood from the court transcript, the lawyer and the newspaper reports.

To those thinking of joining gangs and using guns, Alicia said she would advise them to really “learn about gang life,” and to ask themselves if “’I will regret’” using a gun to harm someone.

I asked her what she would say directly to Lam if she could speak to him. At first, she was silent. And after a moment, tears flowed from her eyes, and her mother followed suit. Soon, all three of us were crying. What can someone say to someone else who caused such grievous injury? Finally, she just said that she would ask, “Why did you do this?” She said there was nothing Lam could say to her.

She was silent on the question of ever forgiving Lam. But her mother was more outspoken, when I asked about whether he deserved forgiveness.

“Hell no!,” Concepcion said. “Never!” adding that, in her opinion, he should have gotten a life sentence or even a death sentence. She described Lam’s behavior during the trial as arrogant, saying that he was smirking or even laughing during parts of the trial. She told me that Alicia may never really be able to live on her own, since she has so many physical and cognitive challenges. Alicia’s silence on the matter was painfully poignant.

Concepcion had advice for other parents, particularly those whose children are in gangs or seem like they are aspiring to be. “Get close to your kids,” she said. “Help them, be around your kids because they will find things that are not good. They will have friends that are not really friends.”

There is no way not to feel deeply saddened and shaken by what has happened to Alicia. Through no fault of her own, her life changed forever in an instant, a bright future inexorably altered. She has traumatic brain injury no less serious than if she had been in a war.

Perhaps in a sense Alicia was a victim of a war – one that has led to the death, injury, imprisonment and destruction of so many people’s lives, due to a failing economy, elimination of social service programs,  the infiltration of drugs into neighborhoods, and the inadequacy of the schools. One can only wonder why this has continued unabated for so long. My heart breaks for this young woman.