Snail Mail Part I: Friends That Would Die For You 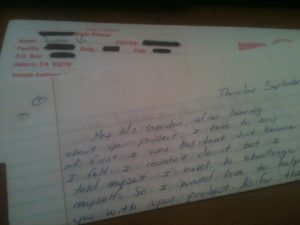 I started corresponding with Lam Vo via snail mail as inmates do not have access to email.
Photograph: Oakland Voices/Debora Gordon November 2012

On July 15, using the California Inmate Locator website, I wrote a letter to Lam, asking if he was my student.  I didn’t receive an answer until the end of August, although he wrote his letter on July 29th.

In addition to confirming that he was my former student, he also wrote, “I’d love to hear about your project and I hope I can be of big help. It’s nice to hear from you and I’m glad you wrote this. This opens my door to education.”

In reading this, I realized that once you are someone’s teacher, it’s a status that never really changes.

I wrote back, “What I have in mind is to write your story, what happened to you, including the events that led up to it, including going back in your childhood, but also within a larger context, of perhaps the circumstances of your family, as well as what happened to the victim (if she’s willing to talk with me, which she may or may not be), and what she would say to you (and what you would say to her) if you each had the opportunity.”

On September 6th, he wrote back a six-page handwritten letter, in which he included these thoughts (everything here is exactly as he wrote it):

“After hearing about your project, I have to say at first I was hesitant, just because I felt I couldn’t do it, but I told myself I need to challenge myself.

…So you read about me in the Oakland Tribune? I want to point out one thing that the papers got wrong. It said I got 25 to life, but that is false. I took 25 years only and only have to serve 85% of that and subtracting my time serve in jail. So I have 19 years left, which is still long, but I know I’m coming home. So I feel bless for a chance to come home to my mom.

… Well, it’s almost 3 years that I have been locked up, October 22nd will make it exactly 3 years. As time goes by, I feel my knowledge on life expand wider and I feel very hungry for knowledge and education.  I’ve found myself absorb by history, especially on Greek’s mythology. Also, on human beings and how we all carry a personal unique personality and we project things, how a person thinks and handle real life situations. So, I feel we have a bit of an interest in the same thing. Your on a young person, and how they led into life of crimes. Mines on a person and everything in life.

I choose it (a life of crime) because it was easy access.  Everyone had always thought I would do good and be successful and it would be true if I had not choose life of crime.  The reason I think people viewed me as a good kid is because of my demeanor…. You are right to have seen me as a ‘nice kid,’ you just didn’t see more of me and you’ll be surprised by my story.

I feel I have been bless with many things and still feel I’m being bless. I feel lucky that you have found my name and given me an opportunity.”

I received a couple of short letters about logistics of phone calls and visits, and then did not hear from Lam for over a month. I was struck by the absolute firewall of access and information. There was no way I could find out why I had not received a response. I could not call him, email him, or receive any information from prison staff.  I did not know if he had changed his mind, moved to another prison, been sick, or been on some sort of disciplinary action.

It turned out, he wrote to me on November 7th, that they were on lockdown for a couple of weeks.  I realized that I do not even fully know what lockdown means.  I had sent him three letters during the intervening period, with some issues I wanted to address. “I have always wanted to understand,” I wrote to Lam, “more about what happens in the lives of young people that leads to gang membership and/or violence.”

He replied on November 8th:

“I want to start with my words to young boys and girls before I start talking about myself… I feel and understand them because I was in their shoes and I was their age, wanting to fit in and finf a group of friends that would die for you.  I want to let them know that the life style of a gangster is fun, but the concequence, risk and in the end is not fun.  Some will have a good rush on the risk and the fame of being the one who got locked up for putting it down for the hood. But when you find yourself alone and no one is there to talk to you or cheer you on, you start realizing, you have to do something about that lonely feeling.  Don’t be fool by what you see. Some people in the hood will have all the money, power, and nice cars. But most of us won’t be as lucky as them.

Most of us will end up doped out, life in prison, dead and broke.  The things we do now might get away but one day you’ll get caught.  And doing this prison time is not worth giving up your life out in the world. Something like this, but more powerful.”

Next time: Snail Mail Part II: Am I a mellow guy or a violent guy?