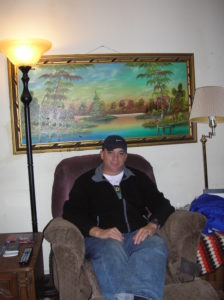 It is occasionally said of someone of dubious repute, “He was no Boy Scout.”

As it turned out, though, Lam was, and hence the double life: part-time gangbanger, part-time Boy Scout.

Growing up, Lam had a circle of friends from his Fruitvale neighborhood – other kids he knew from early elementary school and from the block. Around the time he started middle school, he met a neighborhood kid named Tom, who lived mostly with his mother over on 37th Avenue but also spent some time with his father, Duane Mowrer, off 35th Avenue but way up the hill.

Tom was in the Boy Scouts from about the age of 10, before encountering Lam and another friend, whom I’ll call Juan. The three became fast friends and often hung out at Duane’s house. Duane, 48, trains firefighters, is a life-long Boy Scout, and has been an Army Reservist since 1986. He’s now in an adult leadership position with the Boy Scouts, as Troop Committee Member – someone who supports troop activities such as camping, hiking and other excursions.

Lam did not join the Boy Scouts until he was about 15 years old, but Duane, Tom and Juan, who was already in the Scouts, encouraged Lam to join them on some hiking and overnight trips, and eventually he overcame his ambivalence and joined. He received assistance from adult troop members in purchasing a full uniform for about $80.

As the three boys entered their middle teens, Duane noticed things changing among the boys in the neighborhood. “There were influences over by 37th Avenue taking a lot of kids down the wrong path, so I did make an effort to get as many kids as I could out of there.” Duane encouraged kids to come to his house to play video games, and he also took them bowling, to the movies, even to a teen billiard hall, trying to keep them off the streets. He sensed that many of the parents would not or could not intervene in their kids’ lives, even though they knew their kids were starting to court serious trouble.

“I knew there was a big disconnect between Lam and his stepfather,” Duane said. He thought that Lam’s mother, “seemed like a good, decent parent,” but one who was struggling. He described her as someone “who had the right idea about giving the right direction to Lam and yet was completely out of her element here in Oakland and did not understand the other forces that were working on Lam and every other kid in this city.”

In the meantime, despite his rather 11th hour entrance into the Scouts, Lam was quickly promoted into a leadership position.  Duane noted that Lam was “just a natural leader and his concern for the kids was genuine. Younger Scouts liked him and looked up to him.  He had been appointed an assistant patrol leader almost immediately He was acting patrol leader for some time as well.”

Still, even as Lam got more involved in Scouts, he was also getting deeper into the gangbanging lifestyle.  From time to time, in an attempt to steer Tom, Juan and Lam away from gang life, Duane would try to talk to the three of them about the negative influences of gangs. “I got to see and hear them say they were being sucked into the gang lifestyle. We never came out and said that but that’s what the conversations were about. When I saw them always flashing the gang signs and all the graffiti and everything else and them talking about gang leaders with reverence.  I’m talking about the hold that just sucks you in, it’s so deceptive, almost like puppy love.” Juan and Lam became increasingly involved with gang life, but Tom managed to avoid being drawn in. 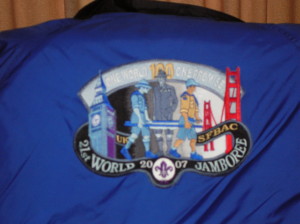 Lam would have received a jacket like this had his 2007  arrest not prevented him from attending the World Jamboree in London that year.
Photo: Debora Gordon/Oakland Voices

But Tom did go along one night with a group of kids who got inside of an empty house that had already been partly vandalized.  “This group of kids decided it would be great to just finish the tagging in the most extreme way they could,  so this huge group of kids goes into the house and just tore it up, kicked in the walls.”

Duane found out what was going on when Tom’s mother called him. “I came over pretty livid and I got everybody out of there. One of the other parents found out about it, (and) we contacted the owner and assisted the owner in repairing everything, even though we knew they didn’t do all of it.”

Another Scouting parent found out and decided that these three guys should not be in Scouting anymore and should be removed and should not go to the World Jamboree, Duane told me. “The rest of the adult leaders were totally against taking that course of action and went to bat for all of these kids, Juan and Lam. Scouts were their only chance.” Duane and some of the other Scout leaders felt they knew how the boys had acted when they went on scouting trips and how they acted when they were left alone with the environment. In the end, Duane was able to preserve their place in the Scouts, noting that, “We went through hell and got them approved to go to the World Jamboree again.”

This more serious brush with the law came when Duane was on deployment in Ontario, CA. Tom was at Duane’s house with Juan and Lam, but at some point they left without Tom, taking with them a 1908 High Tech .22 – a gun that Duane described as an antique family heirloom.

As Duane understands what happened next, “they went to East Oakland, and they stole a car somewhere near 35th Avenue and apparently they didn’t take the car very far away. The story I got was they got picked up literally a block or two from where they stole it. My understanding is that they never confronted a person. Somehow they got the car and took it.”

After serving a few weeks at Juvenile Hall in San Leandro, there was still another chance for Lam to come back to the Boy Scouts. “We would have allowed him to come back in with severe restrictions (on his activities), but he wouldn’t (agree to those restrictions). I think he was just ashamed to the point where he wasn’t sure he wanted to even see us. I don’t think it got to the point where we talked to him about it, he just simply chose not to participate.”

Tom and Lam did continue to be friends for a little while. Duane visited him in Juvenile Hall twice. “The first time I went there, I was met by his probation officer, and I guess there had been some talk between that officer and his mom or the judge or someone about Lam perhaps staying with me instead of at home. I hadn’t heard anything about that. After the initial shock wore off, I realized, ‘okay, I’m willing to do that.’ Nothing happened, of course, it didn’t work out that way. I always wondered what would have happened if…”

But, instead, when Lam was released, he went back to his mother’s house and to the gang life, even though, as I recall from his high school English essay, he had intended to lead a straighter life after having had time to reflect while in Juvenile Hall. But he did not choose that path.

In the summer of 2007, after Lam and Juan’s arrest for stealing a car, Duane had some serious talks with his son, Tom.  “I finally got through to him that he had to make a choice. And he did, on his own, chose to go in a different direction. He stopped hanging out over there as much. To this day, I don’t think he’s friends with a single person he was friends with then.”

Duane learned about Lam’s arrest for shooting Alicia soon after he was picked up in October, three months after the incident, but has not been touch with him since. He has written to Lam, but never mailed the letters.

Since there is at least some doubt among a few people as to whether Lam pulled the trigger, I asked Duane his opinion, since he had gotten to know Lam well. “If I had to place a bet, I would say no, I lean to… he wasn’t the trigger man. I leave open all possibilities. It could have happened. Lam could be manipulated into something like that. I don’t think he’d choose to do it himself.”

Duane said he’d like to have done things differently with Lam. “I think I should have reached out to him more. I should have gone to his house, something along those lines. Maybe I should have pushed more, (telling the probation officer) ‘I’ll take him, when is he showing up?’”

To parents of teenage boys in East Oakland, Duane would tell them, “Love them, hold them, be tough, be hard, and do not allow this madness to continue. Don’t be their friend, do whatever it takes.” Duane feels that not enough parents were getting directly involved. “When I was going over there to that neighborhood, I felt like I was the only one. I don’t know what the answer is. It occurred to me that gangs or the streets are giving them something that family, church, sports, school, Scouts, are not.”