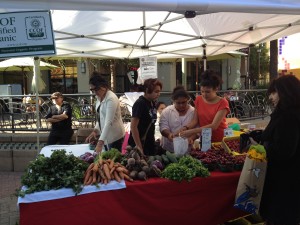 By Katherine Brown
With every roar of a bus engine and horn toot from an overhead BART train, waves of people fill the Fruitvale Village. Not just to get to their next destination, but to visit the Fruitvale farmer’s market.

On this warm Tuesday evening, the smell of buttery kettle corn fills the air. The calm hum of conversations is interrupted by periodic bursts of children’s laughter, and mothers singing as they dance to the old school jams that fill the plaza.

“This is the livest BART station cuz I be jamming,” says Michael Oliver, a retired carpenter who has been a vendor at the farmer’s market for the past few months.

For two years, he has run a business specializing in soul and R&B mixed CDs, all music from the 70s through the 80s. “O’jays, Temptations,” says Oliver, “that’s my era.” To Oliver, music is a thread that pulls communities like Fruitvale closer together. “Everybody loves the old music – that’s what they grew up to. Latinos, White, Black, Asian.”

As Frankie Beverly’s melodic “Before I Let Go” pulses through the plaza, a racially diverse group of Oaklanders, young and old, sway to the music and snap their fingers to the beat.

Patrons nibble on strawberries they bought from the fresh produce stand, or sip coffee from a nearby café, while thumbing through Oliver’s extensive music catalog. His CD stand is just one of half a dozen businesses that participate in the Fruitvale Farmers Market every Tuesday and Thursday afternoons.

The market is held at the Fruitvale Village, which also houses a variety of brick and mortar businesses, including an electronics store and several restaurants. 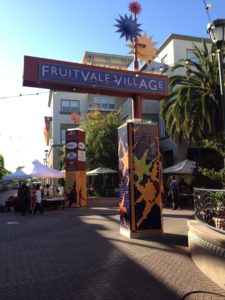 Roxana Arias, 23, works at Powderface, one of the cafes in the building. She says the village and the market together offer a special experience. “The whole environment is diverse, and people are more friendly – it’s very homey.” An Oakland native who has lived in the Fruitvale neighborhood all of her life, Arias feels that this neighborhood has been rejuvenated, especially since the farmer’s market has been in existence.

For Arias, having the farmer’s market in the Fruitvale Village is a “win-win” because of the positive impact it has on the community, and on the bottom line. “About eight years ago, there were no businesses here,” Arias says. “This is the perfect location for business because of the commuters. Business has definitely improved.”

Cynthia and Selena Zamora, both 16, work at JSM Organic, a fresh produce stand their father opened in the farmer’s market about a month ago. The sisters feel that business has been great.

They have also been able to establish relationships with the other vendors, merchants, and patrons – a relationship that feels almost like a “family.” “Everyone looks out for one another,” says Selena. “We’ve really gotten to know one another.”

What seems to add to the abundance of riches, support, and to that sense of family is the market’s diversity. “We meet people that we never would have met if we weren’t here, “says Cynthia. “It’s fun meeting new people.”

The interactions amongst everyone at the market are so genuine and fluid – almost like a dance that blends into the soulful old school jams thumping from Michael Oliver’s stand.

“It’s a really cool place,” says Henry Simmons, owner of Henry’s Flavored Nuts. Simmons, a resident of Oakland for more than forty years, has had a booth at the farmer’s market for the past four years. For Simmons, the market is a way to do something positive for the community. At his stand, Simmons is able to offer “healthy things to eat, like nuts and dried fruits. I’m one of the only Black men out here doing this – I’m just happy to do it.”

As I talk to the vendors and merchants, I cannot help but think about what the neighborhood feels like less than a few blocks away – an environment that is perceived to be unfriendly, unforgiving, and cold. It is as if the farmer’s market is an oasis – filled with warmth and compassion. 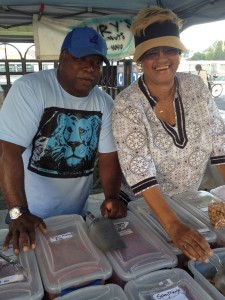 Henry Simmons (left) and Pat Cole are all smiles as they greet customers at their stand. By Katherine Brown, Oakland Voices 2012.

Throughout Simmons’ time at the market, he says that there have not been many problems. “It’s been a wonderful time, even with the protest and after Oscar Grant, there haven’t been any problems. It’s an interesting and nice place to be. It’s a blessing.”

Simmons also feels that a community’s destiny is determined by the people who live there. In Fruitvale, he says, crime and violence are “not always the case. It all depends on who is in the neighborhood. You got dope dealers – you got problems.”

Helping Henry Simmons at his stand is Pat Cole, a retired letter carrier for the US Post Office. Like Simmons, Cole feels that “everything in Oakland isn’t negative.” For her, the farmer’s market is also an opportunity to get out of the house and meet people.

However, Cole does have some concerns and worries about what lies ahead for the future generations in Oakland and in this neighborhood. “Seeing young men and women out here begging and how they dress – it’s sad. No one respects themselves anymore. We’ve lost a generation.”

Still, the market place is evidence that positive things do exist in Oakland, and have the ability to prosper. It’s proof that people from all walks of life are able to come together and support one another, and that business has the potential to thrive.