VIDEO: Health of the Hood – What Makes the Mills College Neighborhood Unhealthy? 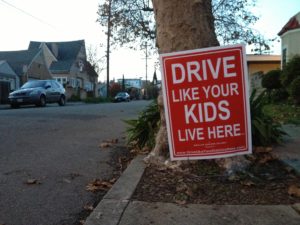 With the advent of speeding in my community, neighbors remind drivers to obey traffic laws. Photo: Katherine Brown – Oakland Voices 2012.

So what makes a neighborhood unhealthy? Is it limited access to fresh produce? Is it a liquor store on every corner? Or is it the speeding cars that zip up and down MacArthur Avenue every evening?

Over the course of two days, I set out on foot around my neighborhood – the Mills College/Seminary Avenue area – to identify what could lead to poor health outcomes for folks that live, work, and play in this area.

During my walks, here are some unhealthy aspects I noticed within my neighborhood: 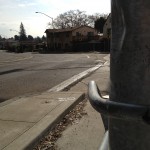 I have lived in this community for over 20 years, and I have definitely seen many changes over time that do not aid in improving the health of my neighborhood.

For example, over the last year, there has been a rash of break-ins and robberies. In one instance, a family was at home when would-be robbers tried to kick their door in.

Fortunately, no one was physically harmed – but in speaking to the mother, and hearing her worry and concern for herself and her family, it was apparent that invisible wounds that still remain.

I love my neighborhood – it is my home – but I cannot help but worry about the health of my community. 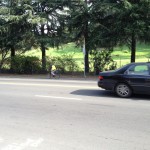 An unhealthy aspect about this neighborhood is that it is not biker-friendly. There are no marked biking lanes along Mac Arthur Boulevard, near Mills College, which could be dangerous for riders and drivers. Photo: Katherine Brown – Oakland Voices 2012.