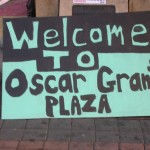 I went to the beginning of the commemorative Occupy Oakland event on October 25th.  I chose to go early and left before dark for two reasons. The more compelling was a lack of certainty as to whether it would devolve into violence – violence being something in which I make a conscious choice not to participate. Also, I did not feel that confident about my physical and psychic energy lasting many more hours into what was certain to be a long night. I was one of many who hoped, a year or so ago, that Occupy would be the progressive response to the Tea Party, that it would exemplify the best thinking of the Left, and would start to make inroads into both the established political, economic and social systems, and into the counterculture.

I was also one of many dismayed by the violence.  There was just no excuse for it, or for any of the vandalism.  It never solves anything for long. It may just displace the problem to another location. Probably the problem will come back.  When bricks fly through the windows of transnational corporations and megabanks, the main benefactors are the glaziers who replace the glass. I doubt it has moved the hearts and minds of either the corporate executives or the general public.

I was happy to learn that although the demonstration went on for hours, it remained nonviolent.  I am moved to know that this is possible, so I consider it a giant leap forward.  I hope Occupy can reorganize itself and have a second coming that meets my original hopes. 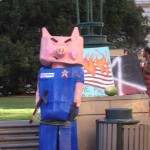 I am a little concerned about the anti-police attitude.  Yes, there are some rogue cops, unquestionably. But we need a police force for the foreseeable future, because so many of us are not ready to live peaceably together.

I think being an Oakland police officer is an extremely difficult job, one that invites criticism from all sides. Yes, there have been more than half a dozen officer-involved shootings in the city so far this year – so far, one fatal – and there is convincing evidence that deadly force was not necessary in any of these cases. This loss of life is tragic and must be stopped.

However, the other 96+ homicides committed in the same period of time, were not committed by cops.  And many shootings are non-fatal shootings, and there have been far too many of them. Occupy should be addressing this dysfunctionality within Oakland’s communities. 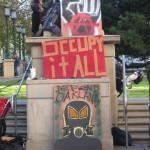 I appreciate and empathize with the outrage at the cops. However, I do not think they need to be called “pigs.” This is left over from the 1960’s, a considerably different time and era for many reasons.  I think cops who use excessive force, including non-lethal excessive force, need to be disciplined, possibly fired, and perhaps even behind bars.

But I also believe that most cops are sincerely trying to do their jobs – enforcing laws, and arresting violent perpetrators.  I support them in this.  They go to work each day and do not know for sure they will return home after their shifts.I do not want Occupy Oakland’s main agenda to be a vendetta against cops. I want it to be a progressive force that stands against Tea Party insanity, which, if Romney gets elected, will be a critical need.

That is where the effort should be focused. I’m hopeful that they (and we) are back on course.