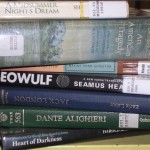 One goal I always have for students is to have them read for pleasure. For the pure joy of reading. So often, in school, we drain every last ounce of possible enjoyment out of reading with lists of vocabulary words, essays on character development and plot analysis. Not that I don’t think those activities are critical to the reading process, but at the same time, it makes reading into more of a chore, and less of a journey.

So, I want students to read, but I also want them to read “well,” read the classics.  To me, food and literature are metaphorically interchangeable, and while it’s fine to snack on chips and ice cream, a really great diet should also  consist of more substantial and nourishing foods.

Likewise, a good diet of reading can certainly contain lightweight fare, but should certainly also include meatier stuff to include novels and essays that transport, suggest, move, inspire, guide and illuminate possibilities.

Lam and other students were given, as a starting point, a list of 101 books commonly read in high school –  although they were encouraged to go beyond the list. They were asked to choose 10 books to read, for pleasure, during the 2007-2008 school year.

In light of the crime Lam later committed, some of the titles from that list are particularly striking today, including Beowulf, Heart of Darkness by Joseph Conrad, Dante’s Inferno, The Odyssey, and An American Tragedy by Theodore Dreiser. Two by the Bay Area’s own – Maxine Hong Kingston’s The Women Warrior, and The Call of the Wild by Jack London. And, Toni Morrison’s Pulitzer winner Beloved, plus A Midsummer Night’s Dream, and Frankenstein.

I doubt that Lam (or any other student) had much more than the title to go on in making these choices. But whether by intent or random selection, I do see some patterns here. I see at least three books that deal with monsters of various kinds, and another that deals with anthropomorphized ghosts.

There are several which explore the dark side of the human psyche, and several accounts of survival under threatening circumstances. We have a tale of Hell, two tales of difficult journeys, and many chronicles of pain, cruelty, torture, hatred, fear and violence.  Perhaps the only hopeful one is the Shakespearean classic – which at least, despite mishaps, ends happily.

I do not know if Lam read any of these books, but I think he may not have read many, if any at all. And perhaps that’s part of what may have been lacking in the formation of his character. Because I believe that had he read these dark stories of human foibles, flailings and failings, maybe he would have had more food for thought. Perhaps his thinking would have been as much influenced by the fictional characters in the books as he was eventually influenced by the flesh-and-blood characters in the street.

Perhaps he could have seen the likely outcomes of his choices and chosen otherwise.  But in a real-life tale, more tragic than any in the storybooks, this was not to be.