More Than a Tattoo: Body Art Honors Lost Loved Ones 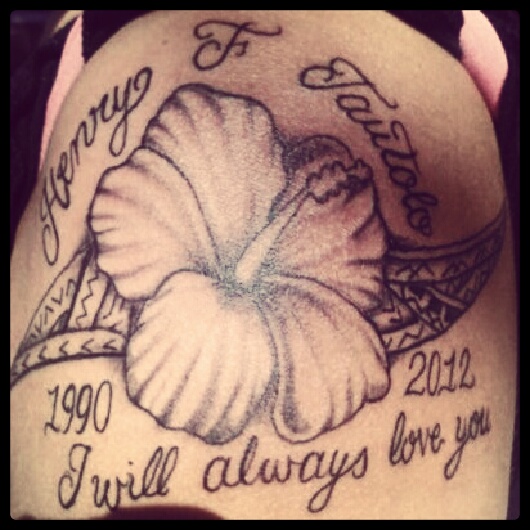 Miriam Mendez’s tattoo mural of her husband on her left shoulder.

Tattoos are a trend among the teenagers I know. But these are not just regular tattoos. 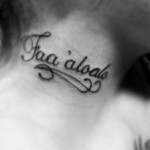 As more young people die on the streets in the Bay Area, it’s becoming common to see young people showing their respects to their loved ones by inking themselves with something that reminds them of that person –  sometimes simply an R.I.P. followed by their lost friend’s name or nickname.

Miriam Mendez recently lost her husband, Henry Faa’aloalo Tautolo, when he was killed in a drive-by shooting in San Francisco at a relative’s house party.

As Mendez grieves daily, she shows her respects to her husband with the tattoo of his middle name on her neck. Faa’aloalo means “respect” in Samoan. “He would always talk about the meaning of his name,” Mendez remembered, “and I simply got it because he’s not here with me and it has a lot of meaning to it.”  She is also creating a large mural of her husband for a tattoo on her back. 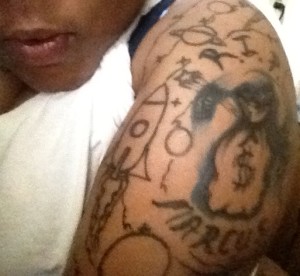 Sarah Harris’ tattoo of her brother-in-law on her left arm.

Sarah Harris lost her brother-in-law in a 2009 shooting in front of his Hayward apartment complex. “I got him tatted because I would always have him,” Harris said. She also has a tattoo of her father’s name. He died from lung cancer in 2004.  This tattoo is a big cross in the middle of her arm, with “Dad” written in the cross.

“The reason I got him tatted is because I didn’t really know him that good,” said Harris. “But when I was around him, it was a pleasure. So when I look at my tattoo every now and then, all those good memories run through my head.” 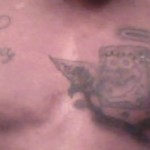 Davone “Bones” August tattooed on his chest the cartoon Spongebob Squarepants – his older sister’s favorite TV show. “She loved him,” Bones said. Davone got the piece after his sister was fatally shot.

Ruby Johnson has two big tattoos of her grandparents – one on her arm and the other on her leg. 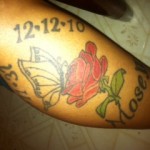 Ruby Johnson memorial tattoo of her grandpa on her leg.

The art, she said, “is a sign of respect and shows that I miss and love them still. I feel happy knowing it is for them, knowing they are still a part of me.”

Ja’Quan Taylor has seven different people that have passed away tattoed on his body. All of the deaths were related to gun violence, and all of the memorials on his body are for those who recently passed away.

Two of the people he has tattooed on himself are uncles who passed away together at his mother’s birthday get together.

“They were just chilling in a car and two people snuck up to the car and started shooting,” Taylor explained. “They were in the car in a parking lot. It wasn’t a drive by; it was a planned murder. One was my blood uncle, and the other was like an uncle to me, too.” 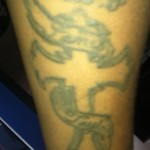 Ja’Quan Taylor’s tattoo of one of his uncles.

After talking to these youth, a major trend I noticed was that most deaths were due to gun violence. These tattoos have such an influence on their lives. The art gives its bearer the motivation to go hard in life.