Notes from an Oakland Peace March 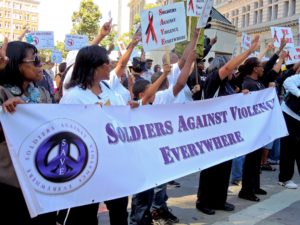 Marchers from East and West Oakland gathered at City Hall and called for an end to gun violence. City officials and candidates for office were asked what they would do to achieve that goal.

Two Peace Marches against gun violence snaked through through East and West Oakland one  Saturday several weeks ago, and culminated with a City Hall rally with hundreds of people asking City officials and candidates for City office to both help reduce violence in the streets and improve relations between the Oakland Police Department and communities of color.

The Saturday peace march was sponsored by Soldiers Against Violence Everywhere, and major churches in Oakland, such as Acts Full Gospel and Allen Temple.  It is one of several efforts now taking place throughout the city to reduce violence using the Boston Cease Fire model.  Several Oakland church groups, coordinating with the national Lifelines movement and local community organizations, are also organizing ‘Night Walks” in areas where gun violence frequently occurs. 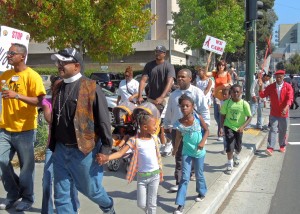 Parents and children joined marchers along the route.

The East Oakland peace march  started at Youth Uprising, but most marchers gathered at the Cesar Chavez School at 29th and International and then marched downtown. City Councilwoman Patricia Kernighan, who represents District 2, joined the march.

Along the way, marchers chanted “Get your peace sign on”  and flashed Vs to residents and workers at establishments along the route.  At 24th Ave and International, the chanting changed to “Somebody died here, we need to care,” and the marchers paused at the location.   At a Michelin tire store further along the route, the workers stopped to watch the march and flashed V’s back to the marchers.

Near the County Courthouse, Rebecca Kaplan, the At-Large City Councilmember, rode her bike up to the march and continued to walk to the half mile to City Hall.

14th Street was blocked off at City Hall, with a stage spanning the street and  community groups manned nearby tables.   There were DJs and church-based musics groups providing entertainment and leading clergy spoke briefly to the energized crowd. 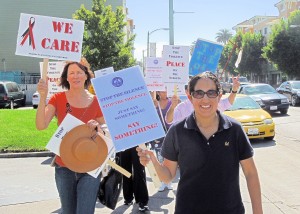 The East Oakland marchers started with about 50 people and picked up more people along the way.  When the march reached the rally at 14th and Broadway, by City Hall, they were joined by about 100 marchers from West Oakland and another 200 participants who came to the rally.  About 400 people attended the rally at its peak.

In the middle of the event, the MC invited up city officials and all candidates for public office. They were asked to support a resolution that called on city officials and the police to support violent crime reduction, Neighborhood Crime Prevention Councils, and increased community policing. The resolution also urged the city to boost the number of officers who are Oakland residents, and to hold sensitivity training for all OPD officers.

Mayor Quan told the assembly that she agreed with the resolution and had successfully obtained federal federal funds to train new officers with the first group of 25 graduating and assuming their duties over the next few weeks.

OPD Captain David Downing, who attended in place of the Chief Howard Jordan, expressed enthusiasm for the march and rally and encouraged many more such events. “If we could have a party like this every day, we would be very successful” in reducing violence in Oakland,  Downing said.

Click here to see a slideshow from the Peace March.