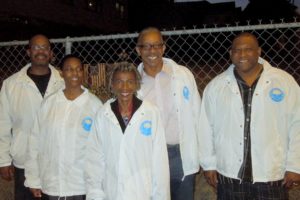 I was on the second walk, which began several Fridays ago at the Israelite Missionary Baptist Church at 21st Ave and 21st Street in the San Antonio area. People began arriving at 6:30 in the evening – all committed to making a difference on the violent streets of Oakland.

Pastor Phillip A. Lewis hosted the event at his church and is working with Rev. Ben McBride and Pastor Billy Dixon, Jr on the Night Walks and other activities to reduce gun violence.

Lewis wore a white City Team jacket and described the project goals and his commitment to the effort.   Night Walks by community members are a part of the Cease Fire and  Lifelines model and come from the original Boston experience that resulted in zero juvenile deaths from guns during the program.  More stories were shared by other members of the clergy and prayers were said.

Lewis explained that the walk were not missionary work in any shape or form. It was about serving the needs of the community and trying to encourage people to work together to make our streets safer. He said we should not act in a critical or judgmental  manner. We should try instead to engage people in conversation and find out what their needs were and what issues might be making the streets unsafe.  Some of the walkers were carrying information cards about a project to register people to vote and to use their votes to make change at the city, county and state levels, but we would only hand out cards if the people we spoke to were genuinely interested.

The women in the group were asked to be the only group members who would talk to women street walkers, while the men were instructed to be distant but protective. One minister said this would prevent misunderstandings and misconceptions on the street. He assured us the pimps would not be far away.

After this orientation, the group of about 30 said a prayer together, then stood up from the pews and slowly filed out onto 21st Ave.   Their City Team white nylon jackets practically glistened in the glare of the street lights.

The group split up into two teams, one on each side of the street, inching together past houses and storefronts like two coordinated centipedes.

Many of the people who stopped to talk with the night walkers were Hispanic and talked with a Spanish-speaker volunteer.  They seemed appreciative of the effort and many of them took the cards describing the voter registration project.  On 23rd Avenue, a very young African American couple came up to ask want was happening and who the group was, seeing the vanguard of white jackets.   They may have been 18 or 19, but expressed their support and quickly moved on.

On International Blvd., men were lined up by two taco trucks.  It was about 8 at night and they warily watched as the white jackets approached.  Again, the team explained that this was an effort to reduce violence on the street.  Several people came forward to express support.  A mall guard, a mustached Hispanic man in a blue uniform, asked some questions and then, relieved, went around shaking hands with everyone.

But some of  the walkers wee questioned by an older couple drinking out of a liter beer can in a brown paper bag.  They weaved a little, then stabilized each other as they asked how the group could ever stop the violence.  The night walkers patiently explained that they would walk the most dangerous areas and try to recruit people from the neighborhoods so there would be a constant presence standing for peace and safety.  The couple approved and thanked everyone repeatedly before moving off into the night.

Did this Night Walk make a difference?  It will not be clear for a while.

Over 50 people were contacted during the 2 hours of the walk,  and all but one seemed supportive and appreciative of the team members efforts.

If 10-20 percent of those contacted are inspired to act for peace and greater safety in the troubled neighborhoods of East Oakland, then we can imagine that becoming a force for change.  Courage and caring can have that effect.

Rev Billy Dixon, Jr. said the Night Walks would continue into December, when their effectiveness would be reviewed.  “We are planning on going out rain or shine,” Dixon exclaimed. “And eventually we will be moving to all the parts of Oakland that need this kind of attention.”